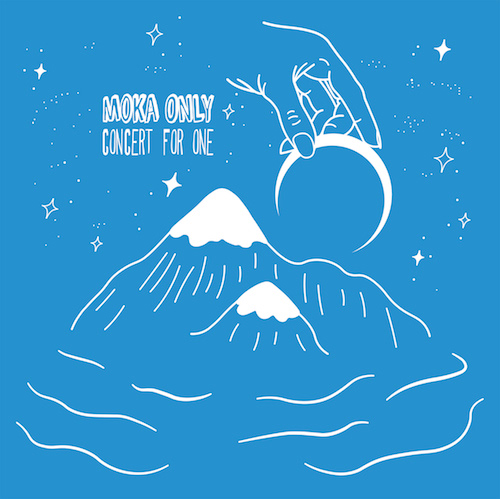 Moka Only :: Concert For One

There’s nothing absurd at all about saying in your press kit that your artist is “something of a super hero” or “an iconic artist in Canadian hip-hop.” No, that’s not overdoing it at all. I’m kidding – that’s WAY overdoing it. I’d at least give Moka Only the latter though. He’s not faster than a speeding bullet or able to leap tall buildings in a single bound, but in a career that spans three decades he’s released dozens upon dozens of albums, many at a rate so prolific they’d make your head spin.

I’m not using the word “album” lightly here. Allow me to say something Moka press kit didn’t, probably because it was so obvious to them they didn’t even think of it, but in 2017 it definitely deserves to be explained carefully. Anybody can release a dozen “albums” if all they are doing is rapping over the instrumentals of other hit rap songs, freestyling anything that comes to mind during a studio session, slapping a title on it and putting it out for consumption on DatPiff. Moka’s prolific release schedule is worthy of respect because not just for his effort but for the QUALITY of the effort. Each track is an original Moka beat with an original Moka rhyme. He doesn’t recycle s–t and doesn’t half-ass anything. Here are a few words from Mr. Denton on just what it means to him.

“I do them. I do songs. They are mere moments of my ‘artness’ in this current antigravity .. where we are all becoming disengaged and averse to actually being present. Can we reset ourselves and get back to soul power, please? It is my only true wish. My wish for the feeling to feel feel-able again in this music life or whatever surrounds it.”

There’s a bit of pretentious psychobabble to that statement, but there’s also an admirable sincerity to the ‘artness’ of Moka Only’s work. The business of selling music can make even the most well intentioned artist jaded, but even with a career spanning three decades Moka is still trying to “get back to soul power.” A lot of the time that results in music that has a throwback J Dilla sound, including appropriately enough “Just Some Vibes” featuring former Jay Dee collaborator Dank (of Frank-N-Dank). Sayeth Moka:

The mellow jazz of the rap and the tone of the wordplay evokes a “Low End Theory” type of “Vibes and Stuff” feel. That to me is a higher compliment than calling Daniel Denton “a rap super hero” or “a Canadian icon.” If you make me think of both J Dilla and A Tribe Called Quest, you’re doing almost everything right. “Snapshot” is more of the same – an overly heavy and slightly freaky bass you could easily picture as a B-side or bootleg studio session of a Tribe song. Unfortunately it’s over in 83 seconds, and some of my favorites like “Crinkle Jazz” are even shorter than that.

Thankfully the longer songs more than make up for it including the album’s closer “What Zone Now,” which keeps giving me a Black Sheep “The Choice Is Yours” vibe with the bass. The ethereal and mellow “Hi” has decidedly unpretentious raps like “I’m gon’ get mine, my get down’s get up.” There’s a little bit of snark to “Featuring Drake” (which obviously doesn’t) but it’s delivered in a playful way that suggests there’s more to the Canadian scene than Toronto’s most famous export. “Are You Happy Now” answers its own question with Moka’s beats and rhymes, and “Real Simple Real Mellow” might sum up this release the best.

It’s actually a drag to score the lyrics on an album like this, because people have a tendency to obsess over numbers and ignore the more salient points in the paragraphs that come before it. On a strictly “the most clever word play” basis, on a “funniest and most timeless punchlines ever” basis, on a “showing off an incredible lexicon and flawless poetic aptitude” level, Moka Only is not getting the high marks on this one. The problem is that any of those things would destroy the MOOD that Moka sets here, and it’s a comfortable and relaxing one you can easily drift into and nod your head to. Fom one joint to the next for 42 minutes Moka Only envelopes you into his musical world, so who cares if he can go bar for bar with Eminem or Rakim? That’s not to say he COULDN’T bust a rap more clever than the best thing Pharoahe Monch ever spit, but that’s not what “Concert For One” is about. This album lives up to its title well – it’s your own personal concert, from Moka Only’s personal take on chill hip-hop. This is an album that will only grow in value to the listener over time.