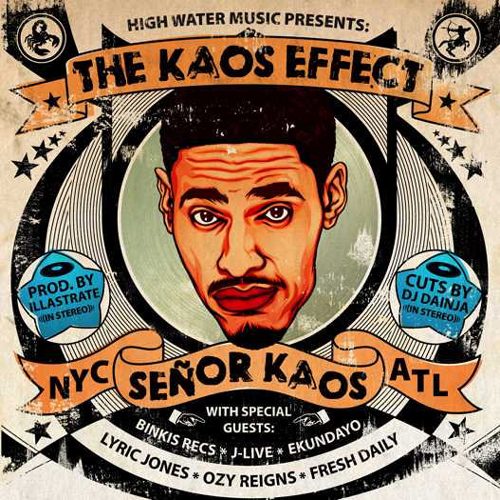 Long time listeners to The Adam B Experience will no doubt recognize the name Señor Kaos, who first debuted to listeners back in February of 2009. Kaos calls his music “Atlanta hip-hop with a twist,” and that twist might be that he sounds like a rapper from Philly or New York. Georgia has had its share of emcees who sound like transplants over the years, but the rearranged Special Ed beat from “Come On, Let’s Move It” in the background of “It’s Like That” is a DEAD giveaway. Here’s the conundrum though – the cover art of “The Kaos Effect” has a banner admitting the NYC to ATL connect but a variety of bios he’s spread all over the web mention Atlanta only. His official bio at High Water Music also has no New York info. Ultimately it hardly matters – his rap on the song would be refreshing no matter what hood he hailed from:

“Laid to rest, in a bed of glass
Back scratched so bad, my mind might crash
My spine might pass, through the flesh trap
More music, less fat, less rap
Recession got shows less packed
Ever since Jax passed, it’s less laughs
I was arranged in the womb once my name’s in the room
Kaboom, brothers get +Ghost+ like +DOOM+
Out of range, out of tune, insane in June
By July through the sky I can fly soon
Hip-Hop consumed with too many coons
You can keep your goons, I’ma keep the moon
The night is mine when I rhyme – I’m sick with it
SARS with the bars, too close you can get it
I spit venom at the rhythm
I destroy your favorite rapper; kidnap who he got wit him”

One part of me as a listener wants to hear a remix of this track with Special Ed as a special guest YESTERDAY. On the other hand listening to the intelligent and aggressive flow of Kaos when he brags “I’m a ten year vet/still young at best” I’d have to think the young’n would eat Ed alive and not break a sweat. I’m still a fan of the “Youngest in Charge,” but Kaos has a battle tested intensity that sounds menacing without being cartoonish, while Ed was better known for the mellow laconic delivery he spit on beats. “Y’all must be wild tryin to copy my style/mic cord wrapped around the neck chokes ’em out.” Kaos is not content to flip funny bars or A to B rhymes – he’ll bust two or three in one bar and not break a sweat. If he’s as polished live as he sounds on the outro of this track it’s got to be one hell of a live show, recession or no recession.

The eleven main tracks of “The Kaos Effect” are produced by Illastrate, who seems to understand how to bring the best out of his charge on song after song. This results in him being able to hold his own even when guests drop into the mix – he even stands on par with hip-hop heavyweights like J-Live on “Restless.” As much as I dig the collaborations, such as hearing Lyric Jones and Ozy Reigns over the jazzy backdrop of “New and Improved,” it’s clear Kaos doesn’t need the help of anybody to grab your attention. On songs like “Spirit of Jax” he trades bars with a turntable and pays tribute to a fallen friend with multiple spit styles. Few people have ever gotten more out of a deliberate one, word, one, beat, style – which makes the Company Flow punchline that much better when it arrives. And if you didn’t think George Michael was hip-hop, then the samples of “Everything She Wants” on “Last Call (Toast Up)” will leave your head blown just as much as his rhymes:

“With no money, no limit, not even the sky
Though I get it, I kick it, I don’t frequently fly
Intuition in tact, on a mission exact
to party at, every spot that exists on the map
From Rockford to Racine and Chi-Town (whattup?)
From Japan to Atlanta, that’s my town (hey!)
It’s time to celebrate life, let the rest hate right?
Make these dreams take flight, party ’til daylight
Life ain’t always good and I know this
But keep your energy smart and stay focused
And stay away from the hype, like the swine flu
And while my mind’s at work I won’t mind you
The Most Interesting Emcee In The World; may I remind you
And like a homophobe I’ll never get behind you
Signed sealed my thesis – not, for the weakest of minds
So toast up – cause it’s party time”

Thanks to Adam B, I’ve liked the stylings of Mr. Kaos for some time now, but “The Kaos Effect” takes it to a level even above the level I had expected. He doesn’t make my life easy, because I want to offer high praises for this album, yet I’m required to temper my enthusiasm and keep in mind there is more rap music available these days than ever before. The mind-numbing amount of digital and physical releases available mean that even giving an emcee straight 8’s across the board isn’t necessarily a strong recommendation, given there are a lot of people producing quality hip-hop music in 2011 (which at least if nothing else disproves the notion that “hip-hop is dead”). And to be fair, there are one or two songs I’m kind of “eh” about on repeat listens, in particular “Did You Miss Me” featuring Binkis Recs, and it may be a tiny iota of a copout to include an “Automatic Classic Remix” and not another new track. Nevertheless I really want to stress one point in this review above all others – Señor Kaos sounds like the future of hip-hop. He isn’t just good, he’s what’s going to be good tomorrow and years from now. If you want to hop on the bandwagon, here’s a good place to start.