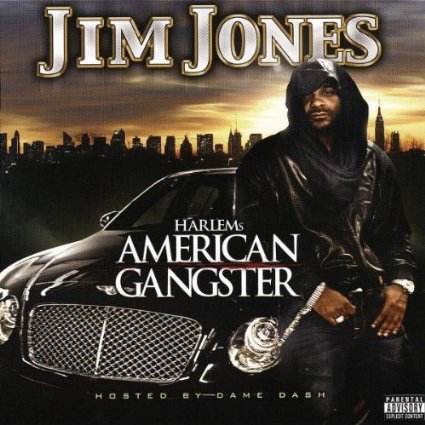 I am not even going to discuss the “American Gangster” tie-in theme because so many people are exhausted with it and get right down to brass tacks as far as the music is concerned.

I want to love Jim Jones.

My primary reason for wanting to love the Dirt Angel is that he is in possession of what I consider the most valuable asset a hip-hop artist can have: a great voice. He has a deeply satisfying baritone accented with just enough nasal quality to differentiate himself from others around him. It is the type of voice that would allow him to blend seamlessly with just about any style of production he encounters be it Southern bounce, sample-driven beats or elaborate music productions featuring a high level of musicality. Over the course of his recorded hip-hop career, he has recorded over just about all of these production styles â€“ and almost pulls it off every time. I say almost because Jim Jones is lacking in the one area most critical to emceeing: timing.

With a great voice, you can forgive almost anything about a rap artist. Lackluster lyricism? So what. Strange or confusing flow? Badge of personal identity. Beats not so hot? An incredible voice can elevate a mediocre track and make a hot beat a classic. The only area where a hot voice serves as little to no redemption is when an artist is struggling with his timing. Jim Jones can EASILY be one of the hottest artists in the industry, as well as a potential hip-hop legend, if he would only take the time to repair his biggest vice â€“ his inability to ride the track and stop making his backing vocals clash so badly with his lead vocals, as well as the track he rhymes over.

I am serious about this. He has almost every other effort covered. He seems to care about his lyrics â€“ most of the time. Members of Dipset (present, former and affiliates) have always been known for their remarkably good taste in production work. The one element that you could always depend on with any song affiliated with that collective is that the tracks would always be of top quality. This mixtape is no exception to that general trend â€“ the tracks stay hot here as they have with any other effort he has been involved with.

The Latin-tinged flavor of “The King” (produced by Info & Nova) continues the trend of celebratory styled production over lyrics that discuss criminal kingpins in Harlem history who could not hold the crown for one reason or another. Itâ€™s actually a quite interesting premise in that it does not celebrate the rapperâ€™s accomplishments as much as it outlines where previous “crown holders” before him failed to hold down the Harlem kingdom. The beat works, they lyrical premise is on point, that wonderful voice is no nice. HALT! What do I hear blended within this potentially sweet effort? Damn, there go those backs off time again â€“ minor problem that could have been fixed in the recording process before and shortly after. It takes what could have been sublime and makes it merely good.

He manages to avoid this problem with the singles “Love Me No More” (produced by DJ Khalil) and “Byrd Gang Money” (produced by Chad Beatz), which both feature him keeping his timing on point, nice lyrics as well as some seriously hot production. The hooks do what they are supposed to do and these songs outline what an ENTIRE Jim Jones album could be if he could just stay on the beat.

“Stay Ballin” (produced by Oneya of the Ulepics) features an 808-driven Southern bounce track, illustrating the fact that Jim Jones can sound good over just about any style of track he gets on. There is only a portion of the track here (it IS a mixtape).

“Come On, Come On” (produced by P. Riot) featuring NOE (check him out sometime), quite simply the greatest Jay-Z sound-alike of all time, is another track that comes close but falters a bit in execution.

Aside from the skits featuring Dame Dash, this mixtape (or street album, whatever you want to call it) has little filler by way of production and if the vocal timing were on would warrant a higher score.

I keep hoping that eventually Jim Jones will fix that one problem and go on to make that classic joint that I know that he is capable of. As far as this mixtape is concerned, it is not enough to warrant a retail purchase because so many of the songs are only 1 to 2 minutes long and seems as if they are not complete versions (the bane of the mixtape industry). However, there are several singles here worth downloading at your favorite mp3 merchant (Emusic, Rhapsody or Itunes). Meanwhile, I am going to keep hoping that Jim Jones gets that timing issue handled in time enough for his next album OR he gets an engineer who knows how to move those backs around enough to get it to sound how it should.