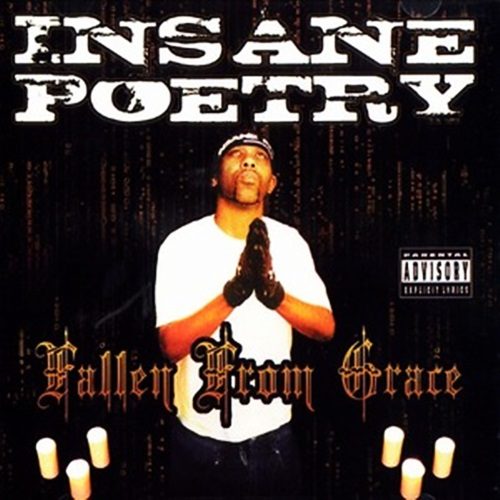 On the intro to “Fallen From Grace,” the fourth album by SoCal underground rap crew Insane Poetry, MC Cyco makes it clear that being an underground legend is hardly a lucrative prospect. He describes working 12-hour days at a bullshit job to pay the bills and alimony. He presents “Fallen From Grace” as a last-ditch effort by a man on the edge of financial ruin and insanity, one last chance to make it in the rap game and prove to himself and the haters in his life that he truly is a rapper. It is a startlingly emotional plea, and adds an element of rawness and honesty to the album.

Insane Poetry’s 1992 classic “Grim Reality” laid out the template for horrorcore, and they don’t stray too far from that genre on this disc. “Kill You,” “Boyz In A Box,” and “Murderland” all invoke horror film imagery to describe life on the streets. However, just as on “Grim Reality,” Insane Poetry is aware that the grim has to be balanced by the reality, and there are a lot of tracks devoted to describing the realitiesof life. This is where the album shines the most, with Cyco stepping in like an elder statesmen. On “The Game of Life” he warns young rappers about the danger of flirting with gangbanging:

It is these non-horrorcore tracks that make “Fallen From Grace” worth checking out, and keep it from being monotonous and boring.  Cyco barks out his rhymes in a cadence that reminded me of Tupac, minus the sensitivity. He makes his connection to Pac clear in the title track:

The true star of the album is Jason “JP” Pearl, who handles production. He offers up seventeen tracks of future funk that sound as good as any West Coast producer has to offer. Highlights include “The Game of Life” with its creeping guitar, “Black Widow” with its spacey take on “Love to Love You,” the farting funk of “Heartless,” and the triumphant keyboard stabs of “Revenge.” JP may not have the budget of a Dre or Timbaland, but it doesn’t show in his beats. I love West Coast G-funk, and Insane Poetry serves it up in spades.

“Fallen From Grace” isn’t the classic that “Grim Reality” is, but it is a solid album by longstanding underground legends. I don’t know if it will cure all of Cyco’s financial worries, or free him from the drudgery of his day job, but it should prove once and for all that he is a rapper to reckon with.