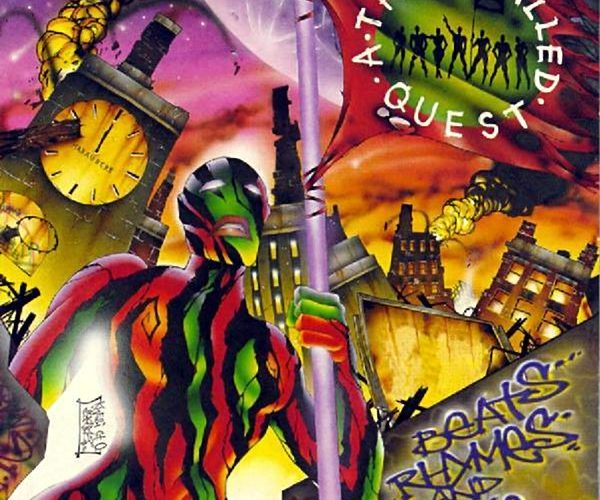 What do you expect? 1nce Again, A Tribe Called Quest returns on point. This time, they let Tribe fam member Consequence get on and flex a little; he’s on “Phony Rappers”, “Motivators”, “Jam”, “Mind Power”, “Word Play”, and “Stressed Out”. Yes; I’m quoting straight from the liners, but that’s because I’m listening to “Phony Rappers” right now and I don’t want to skip ahead past any tracks. In fact, he’s in the mix more than Jarobi was on the first LP (did Consequence become Jarobi incarnate? You decide). This album sounds more dark and gritty than the last LP; it reflects the “end of the hip-hop world” motif of the album cover and artwork. Q-Tip still drops one-liners like “Toniiiiight, we gettin off like O.J.” but this album is mostly nod your head and feel the flow. Q-Tip’s voice locks down an instrumental most other weak-voiced mic masters couldn’t, even with an average rhyme… and certainly, nothing Tip ever said has been below pHair at best. You can’t sleep. This is pThis is the pure Tribe, with a little bit of everything — some jazzy beats, some Phife antics, some messages to the ignorant heads, and the Native Tongue groove that has been officially reinstated. Just remember, it’s not Johnathan Davis anymore, it’s Kamaal — but on the mic, he’s still “Slick Tip the Ruler”.

Oh, and don’t forget to pick up your limited edition copy of the CD, cuz it’s got a 3D “Sportsflic” version of the cover art that is most DEFINITELY the flavor of the season.