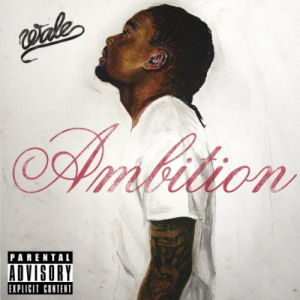 Much has been made of Wale’s recent “defection” from kind of conscious/hipster rapper to Maybach Music flosser. To be honest, after I revisited his debut album (“Attention: Deficit”) in preparation for this review of his sophomore, “Ambition,” it all made perfect sense. In that review, I was particularly critical of Wale’s complete lack of charisma, and went as far as to claim complete indifference to his lack of identity. Let me crystallise that for you: Wale was boring as fuck on his debut album. Seriously. Forget the fact that it didn’t sell many copies; that it wasted a feature from soon-to-be biggest artist on the planet; that he had somehow created a buzz after three years of grafting/connections. Yes, he’s done a complete volte-face and thank goodness. The result is almost irrelevant – at least he’s a bit more interesting now.

Let us first clear up this nonsense that “Ambition” might somehow be considered “a classic” album: no, no and no. It’s not. Whoever told you that was lying (actually, it was probably Wale himself). However, it is an LP with various merits, and the most important thing that MMG have managed to accomplish is lighting a fire up the MC’s backside – he sounds really amped up, straight from the off. In the first four tracks, culminating in the searing “Legendary,” Wale sounds focused, direct and brutally effective. His lyrics were never the question, so it’s no surprise that he’s utilising those skills in an all-together different realm. The first three tracks, initially at least, don’t sound that inspiring, but they are musical growers. “Legendary” proves why DJ Toomp is so good, but just because the cheap horns on “Miami Nights” sound unconvincing, it doesn’t mean it isn’t catchy. The sudden switch from the hard-bodied to the ladies song “Lotus Flower Bomb” (yes, seriously) is a touch too abrupt, but even though it’s incredibly soppy, it does at least worm its way into your brain.

The middle third finds Wale rapping about chains on a blippy-blippy trunk-shaker, and it is a shock to the system – again, however, at least it functions on a primary level. “Focused” reunites him with former foe Kid Cudi, and it’s a solid enough inspirational anthem. Lloyd pops up on “Sabotage” and continues his recent revivalist turn, with relative success, although the next song “White Linen” features Ne-Yo to somewhat safer effect. The Diplo banger “Slight Work” is immediately notable, simply because it sounds so different to the rest of the album, and Big Sean guests – the two rappers just basically chat shit over a hot beat for a while, and whilst it certainly isn’t creative, it’s a stupidly enjoyable song to play loudly in quiet residential areas.

The final third opens with “Ambition” and it nails that typical Drake sound (producer T-Minus ensures that), with Wale working well alongside label boss Rick Ross and Meek Mill. It’s one of those underrated anthems that suddenly sneaks up on you, and it’s not surprising that the streets seem to have taken to it with open arms. In fact, “Illest Bitch” is the first song that flat out doesn’t work in any capacity, but DJ Toomp ensures that the run ends abruptly, lacing “No Days Off” with a dark and stomping beat that helps restore the balance. Wale reps DC on the penultimate track, and invites Rick Ross back again on the album closer – strangely, another ladies cut, this time underpinned by a Lex Luger beat and another Lloyd chorus. It is a slightly uneven closing section, but it has more hits than misses.

To be honest, “Ambition” is a very strange album to review. Wale isn’t the first rapper to change tack. Lupe Fiasco used to spit hard shit before he really got recognition. Joe Budden used to make club anthems for Def Jam. Who are we to pigeonhole them? That’s not the issue that merits close attention – the biggest aspect is that, like the primary diet of Rick Ross, this is a truly throwaway fast food album. You will enjoy it for a while, and in a year, I guarantee that you will not be listening to it, save for a few songs (such as “Legendary” and “Ambition”). The quality of the music reflects this, as does the depth of Wale’s subject matter. But Big Macs are still enjoyable in their own way, as is this album. It’s a marked upgrade on the borefest that his debut was (looking back, my words rang true but the score was too high), and we can thank MMG who at least have a forceful energy to them at present (this album will shift copies). Wale has proved an intelligent addition to the team: even if he’s not rapping about anything much, he does it with a bit of lyrical skill. His voice still doesn’t grip me, but he’s certainly become a much more entertaining MC. Now he’s sold well, and made his bosses a bit of cash, it would be great if he displayed some actual ambition next time around. Whatever happens, he’s grabbed our attention much more effectively, even if there is a deficit of ambition here.