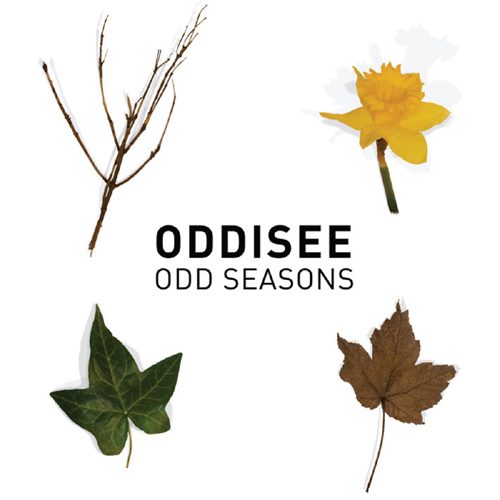 With so much music available at our fingertips, Oddisee’s free seasonal releases between May ’09 and ’10 were liable to fall through the cracks of cyberspace. Past albums are available digitally at his Bandcamp site for $5 each, but to please those who like to hold a physical product in their hands, Mello Music Group has teamed up with Fat Beats to repackage “Odd Summer,” “Odd Autumn,” “Odd Winter” and “Odd Spring” into a nice digipak disc and double vinyl platter entitled “Odd Seasons.” (It’s also available via MP3 from Amazon.)

The largely instrumental collection kicks off with a vocal feature from across the pond as UK MC Tranqill helms the casual “The Supplier” to report from his pursuit of happiness. The change to “Almost a Year Since” with its busy drums, filtered basslines and rapidly plucked strings is rather abrupt but also remains the most blunt transition. That not all tracks blend seemlessly here only goes to show that we’re dealing with a versatile producer. Covering terrain ranging from symphonic funk (“Everything Changed Nothing”), to soulful boom bap (“Saw Myself Today”), to cinematic/dramatic scores (“Theatre”), to anthemic/majestic East Coast hip-hop (“Warmer in the Day”), and even indie pop (“Frostbit”), Oddisee nevertheless never spreads himself too thin.

Oddisee’s instrumentals are produced with a steady hand, clearly chiseled even when they take on more experimental forms. With a fondness for Latin American and African percussion, his tracks usually have a strong rhythmic backbone, yet the rhythm section never overpowers the other instruments but is part of the musical dialogue. Like all instrumental music whose sole purpose isn’t to make you dance, these tracks tell you stories – if you let them. And if Oddisee lets them. Not only were a dozen tracks cut entirely from the original series, the 31 remaining ones were almost universally shortened, a measure that seems somewhat pointless when it concerns tracks that barely clocked in over a minute to begin with and there would have been room left on the CD or wax. So there are definitely instances where a beginning story arc can’t develop because of the brevity of the piece, but in general “Odd Seasons” flows cohesively from beginning to end.

Still there are some highlights. Opening the spring section, “The Blooming” comes the closest to a theme song with its slowly blossoming orchestration conjuring up visions of light pastels spreading across green pastures, preceding a vocal feature from Oddisee’s crew Diamond District on the party joint “Birds & Bees.” Oddisee himself gets on the mic on the down-to-earth “I’m From PG,” while XO pays hommage to the African-American ancestry on the wordplay-heavy “Black Broadway.” On the instrumental side, one of the longer tracks that are able to shine is “Chocolate City Dreaming,” a joyful arrangement of funky guitar licks, brass section and stuttering drums.

“Odd Seasons” may be a patchwork, but like a quilt it holds together well and the pieces constitute a colorful, coherent whole. It evokes positive emotions throughout. The passion and the labor that went into these tracks are evident, and while he isn’t completely alone in his field, the Maryland representative comes out somewhere near the top thanks to steady quality control. 2012 looks to be another busy year for Oddisee with several albums slated for release (Finale, Diamond District, Stik Figa, Tranqill, a solo album with rap), so brace yourselves for more Odd seasons.