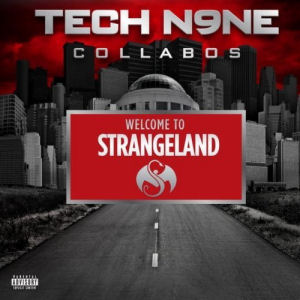 Whether you are a fan of Aaron Yates aka Tech N9ne or not, there is no denying the man’s work ethic. Despite a constantly crazy tour schedule which sees Mr Yates frequently cover the globe, “Welcome to Strangeland” is Tech’s FOURTEENTH studio album since 1999. It’s also his second release of the year, following hot on the heels of “All 6’s and 7’s“, and this is the fourth instalment of his ‘Collabos’ series. It follows the format of its predecessors with Tech N9ne sharing microphone time with a host of guests and this time around it is his Strange Music family that step up. It is a concept album of sorts with Tech taking us on a journey through Strangeland and introducing us to his various labelmates along the way.

“Stars” is a strong start to the album as Seven’s twinkling and atmospheric track provides the perfect backdrop for Tecca Nina’s stuttering, stop-start, rapid-fire delivery to describe his voyage to Strangeland. This leads straight into the title track where long-term affiliate Krizz Kaliko greets Tech and indeed the listener and welcomes them to Strangeland.

Krizz Kaliko: “Now here is a beautiful world for you to enter
You can hear how we kill everyone, we’re helter skelter
On this fear that is fearin’ us, spear chuckers that love to bust
Shear stroke of genius since we appeared out the penis
We just the lost boys like we sons of Donald Sutherland
We done strugglin’ we forced our way in and forced to weigh in
The big swingin’ cocks of rap, r&b and rock
We been seein’ lots of cats copyin’ ya not
Them G-O-D’s and we can bless ya like we was a pastor
We past ya long ago, ya concentrate on rappin’ faster
This is the temple of makin’ it look simple to ya’ll
I wasn’t really in to rap or into rap cause I seen too many falls
Waterfalls in Strangeland go up, filled with streams of Caribou Lou
Fill ya cup and toast how they blow up
My team captain is you Nina I’m the first lieutenant
Enjoy your visit this is Strangeland that you invented”

This also serves as the newcomer’s introduction to Krizz Kaliko himself and his presence is heavily felt on this album, either rapping or singing on most of the fifteen songs on display here. As I listened to this album, I became more and more impressed with Kaliko, none more so than on “Unfair” where among the company of Tech and fellow Kansas City spitters Ces Cru, he delivers arguably the strongest verse on a lyrically airtight track. Kutt Calhoun and Jay Rock come through over the Dre-like production of “Kocky” before Tech N9ne himself slows the pace down for the first release from the LP, “Who Do I Catch”. The first verse may be familiar to anybody that saw Tech’s appearance at this year’s BET cypher but it is far more suited to in-house producer Seven’s subtly brilliant beat. Tinkling piano keys set to a slow handclap create a low-key platform for Nina to tell the listener what he is and has been about as the public only just seem to be catching on after Tech’s twenty-odd years in the game.

“Real rock rap and not to Xerox weird not
Enough to make you fear a lot from here watch
I ran scrimmage and I fought to the damn finish
And I popped eyes open without eating me canned spinach
My fans in it constantly tellin’ me I can win it
If I stand grimace damagin’ man every damn minute
I blend then expands quick, it scrams wicked rhyme
Grand spittage, H.A.M. with it, fans dig it N9ne!
Cha! Hard to see me like the background
Your rap styles comin’ softer than a cat’s meow
Red laces but booted like I’m Iraq bound
That frown will get you ate by my cannibal from Sac Town
So relax pal, pat down, gat down, bat down, blackout
With a fat smile, I might react foul so don’t make this cat growl
I caught everybody when I spazzed, wow, who do I catch now?”

Brotha Lynch Hung and Prozak both join Tech N9ne on the Jomeezius the Genius produced banger “My Favourite” where the three MCs tackle the topic of their particular vices. I found the album to dip a little towards the middle as “Retrogression” is followed by “Bang Out” with neither seeming to maintain the focus of the first half of the album. The former, featuring ¡Mayday! comes across as a little awkward while the latter, despite its banging beat(Seven yet again) just seems out of place and disrupts the flow of the album.

The track that seems to have garnered the most attention from “Welcome to Strangeland” is “The Noose”, an ode to the often forgotten troops that are wounded while representing their country. The song, again featuring ¡Mayday!, is a chilling moment of sobriety as the trio of rappers lay down genuinely touching verses from different perspectives but again it is Tech who stands out:

“I went to visit wounded soldiers out on Camp Pendleton
And the cost of the missing limbs it means that it’s no love like Wimbledon
When they sat before me young as hell
And give me accolades like gentlemen
I’m thinking that the enemy took away their ability
To walk and to touch no way of rekindling
What is now gone, unless they got money like Forrest and Lieutenant Dan
The war if you in it, damn, they have no remorse and any minute, BAM!
That’s fucked off
While we’re chilling on tour on the bus getting sucked off
Know our family is grieving ’cause war is receiving their peeps
And they crying their butts off
That’s why I get so much, when I flow bust
While we got it so good, cause it’s so rough
But the young soldiers who do exactly what they are told to do
Damn, do exactly what they told to do
Defend their country and uphold the crew
But give my one and only soul for you
That’s a hell of a job description
I don’t know if my god’s with this one
But I guess it’s the laws of Sigmund
Sending out young ‘uns and they fall the victims
Of an evil clan’s plan, that’s why I be saying dwam
Because on 9/11 I realized our fate is in another man’s hands”

As proven on his previous thirteen albums, Tech N9ne is as diverse a rapper as they come and is willing to meet any topic head on, no matter how controversial that topic may be so it’s no surprise to see him tackle such a delicate subject on a release like this. There is of course the wild side to Tech that likes to “Party and Bullshit” and that is scattered throughout this album too. For such a diverse album it would be easy to lose total focus but, for me, three things tie this collaboration LP together as a cohesive piece of work. Tech N9ne’s unorthodox yet impeccable flow, Krizz Kaliko’s perfectly delivered hooks and Seven’s eerily slamming production. This, paired with the fact that the whole roster at Strange Music seem to have upped their game too, means that there has never been a better time to take a visit to Strangeland.