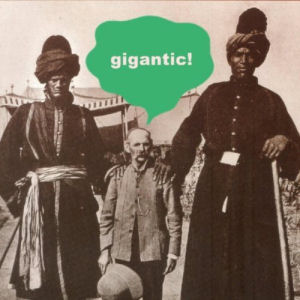 A couple of weeks ago Mike Baber reviewed Small Professor’s “Gigantic, Vol. 0” – released as a prelude to his more official commercial debut that drops today – “Gigantic, Vol. 1.” The Philadelphia based, self-described “progressive” hip-hop artist obviously and whimsically referring to the Large Professor of Main Source fame with his name, which is fine to me. As a producer there are few better people you could be inspired by, and although his rap career has been marked by long periods of inactivity, the albums he’s part of have definitely made a lasting impact on hip-hop history.

The Small(er) Professor seems more inclined to stick to the production side of the game. As such he’s working with his own all-star list of rappers he knows and feels on the mic, and if you are a regular reader of this site you’ll be happy with a lot of his choices. Tanya Morganmember Von Pea blows up his self-titled track “P(ea) Gets Off.” Perennial video game rap head Random drops the 8-bit in favor of a flavorful Small Pro loop for the heartfelt “Play It By Ear,” pitching his affections to an unimpressed beauty who only sees $ signs in her eyes. The menacing “Spare Razor” features two of the deadliest rhymers on the underground – Guilty Simpson and Reef the Lost Cauze.

“We roll up Mobb Deep, like +The Infamous+
From Exodus to Genesis, this is relentlessness
In Helsinki blowin L’s stinky with them Finnish kids
Finish this sentences, anyone dope as the nigga spittin this?
I thought so, shut your liver lips
Your kingdom I diminish it, take your queen get in the bitch
And make her exit into where entrances is, I stay in some shit
Get it kid?”

I do – but almost wish I didn’t – that’s kind of disgusting. Then again the line “You’re the greatest of all time, so soon you’ll be dead as B.I.G.” may offend far more people. Reef and Guilty make absolutely no apologies for this song, and thanks to Small Pro on the boards, they really don’t need to. That’s not to say the non-rap songs don’t stomp hard too. The “Barefoot Gorilla Baboon Funk” features an unnamed female talking about how great sounds make you want to dance, followed by samples of Craig Mack and James Brown both wanting to hear the flavors in their ear get FONKY. Even “The Message” works its way into the splices over this booming yet spartan soundscape. Still it’s the rap songs that you’ll dig the most from coast to coast, such as Has-Lo’s “When the Last Leaf Falls” and Blueprint’s “Make Moves.”

There aren’t many downsides to Small Professor’s “Gigantic, Vol. 1” but if there is one it may be how LITERALLY small the album is. Even though there are 14 tracks, the entire thing is done in under 38 minutes, with only one song on the whole album longer than 200 seconds (Buff1’s “Can’t Be Scared”). Fortunately the Amazon price

for the digital release of this album is only $5.99, so it’s not a heavy price for a non-heavyweight joint. Then again if UFC fighters like Jose Aldo have proved anything, it’s not the size of the dog in the fight, and other such cliches. Pound for pound the size of Small Professor’s “Gigantic, Vol. 1” stacks up well to producers who have been around longer and are much better known. His future looks bright based on this album’s beats.