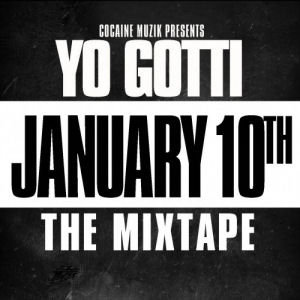 Simple title. Simple concept. Yo Gotti’s latest mixtape veers from his every popular “Cocaine Music” concept for more than a few reasons. The very first is marketing. Name the mixtape after its release date and advertise both with one short phrase. The second reason is the fact this date holds some significance to the Memphis emcee. His major label “debut” dropped on January 10, 2012 and this mixtape was meant to both undercut and advertise “Live From The Kitchen.” Like any rapper, Yo Gotti wants to sell records. Yet, with “Live From The Kitchen” Yo Gotti felt a little disrespected and for good reason. After being in limbo for over 5 years, Yo Gotti only learned of “Live From The Kitchen’s” release date when someone told him the album was up for pre-order on iTunes. Ouch. Yo Gotti rightfully calls himself one of the most popular rappers on the mixtape circuit and is unhappy with the unceremonious manner his album has been treated. “January 10th” serves both as a way for Yo Gotti to vent and clear up a few issues and drop some tracks which were left off the retail version of his album.

I’ve reduced mixtapes to a practical process. I listen. Repeat. Then throw out anything I don’t see myself listening to again. It’s a simple process with a plethora of factors that influence. Dope song with a DJ yelling every 30 seconds? Recycle Bin. 1st minute of a dope song? Recycle Bin. Rapper’s generic take on the beat of the week? Recycle Bin. The process frees up my hard drive and ears from unnecessary material. On this mixtape I found myself sparing 6 out of the 14 songs from the dreaded bin. The number is deceitful because out of the 14 tracks found on this mixtape, 6 are actually 1 minute interludes that consist of Yo Gotti speaking on a variety of issues. They are very informative and entertaining for the most part, but one listen was enough for me to get the idea. So out of the 8 actual songs on this mixtape, 6 were dope to me. The interludes find Yo Gotti telling us the story of how he found out about “Live From The Kitchen’s” release date, how much he loves his fans, how his label came about, etc. Great stuff.

The songs found on the mixtape are all original. The beats are all dope, even on the ones that didn’t make the cut. “I Got Dat Sack” and “Kill Dem Hoes” both have hard hitting bass and minimal, dark synths. It’s a generic but satisfying recipe for southern beats. Unfortunately the concept is pretty damn repetitive on “I Got Dat Sack” and “Kill Dem Hoes” is actually a song by some wack rapping chick named Sylver Karatz that only features Yo Gotti. For some, the remaining songs may be just as generic as Yo Gotti rarely ventures from relating tales of his life, both in the dope game and rap game. “Real Shit” sums up what he’s all about:

“I’m on my grown man flow, band up flow
Nigga, I just bought a Phantom off the showroom floor
See these niggas sub-leasing, but his fans don’t know
He’s a pussy and I exposed this nigga, I sell hope
In the streets niggas look up to Gotti and I understand why
Ain’t on that slick shit, nigga, I see eye to eye
Running round, talking down, playing games, niggas die
Young niggas, extended clips, black nines, number five
My brother back in jail, my songs leaking out
Lil rappers playing with me, trying to stop from clicking out
Did a show in Alabama, yeah my strap was sticking out
Security tried to arrest a nigga, but instead they kicked me out
I been going through a lot of shit, fucking with this model chick
Baby mama left a nigga now it’s hard just to see the kid
Record label can’t get it right, they pushed the date back
Ross hit a nigga up trying to put me on Maybach
Tip hit a nigga up trying to get me Grand Hustle
All these niggas is my niggas and I respect the hustle
Some of these niggas like my brothers they been real since day one
Realest nigga in it, I been real since day one
And a nigga keep saying I’m one song away
Fuck that, I’m five million dollars strong today”

Yo Gotti’s sense of honesty and reality shines through in every word and is emphasized by his thick, southern drawl. Lil’ Lody produces “Real Shit” and gives us a mellow mix of pianos and airy high pitched female vocals. “Live From The Kitchen” is a surprise here as the title track was actually left off the album. Lil’ Lody gives us another dope beat with synths dancing over the track while a majestic horns play in the background. For those unfamiliar with the concept, this songs about dope dealing. “Colors” is a buck party anthem about everything color related. Yo Gotti declares the “world black and white and I’m color blind, all I see is green and them dollar signs” while Juelz Santana tells us “I don’t see no colors, but I see you hating ass motherfuckers.” “Real Niggas” covers similar ground as “Real Shit” but this time finds Yo Gotti lamenting at the scarcity of realness in the game. “Hold Me Back” is both a depressing and uplifting song as Yo Gotti covers all his industry woes but still lets us know there’s no stopping his hustle. “Fire Dat Bitch” is really just a catchy song with a hype beat and hook. It’s actually a Zed Zilla song featuring Yo Gotti, but Gotti handles the hook.

I’m a Yo Gotti fan and I’ve been one since way back when he was still dropping albums independently. To the outsider he might be just another southern rapper talking that trap shit, but for those willing to give the man a chance you see he’s a talented rapper who just happens to keep his music grounded in his reality. For those who don’t like that reality, you’ll probably never be a Yo Gotti fan. Those who can dig music about the dope game, living the lifestyle, and hustling, it gets no better than Yo Gotti and “January 10th” happens to be one of his best mixtapes. It’s a shame his label woes have kept him from gaining the status he should have, but with mixtapes like this Yo Gotti should have no problem finding another label to give him the proper push.