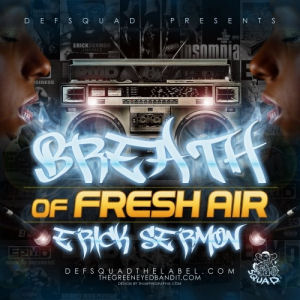 The news Erick Sermon suffered a heart attack last year hit me pretty hard, especially coming as it did just a few days after the passing of Heavy D. Nobody wants to lose two of their childhood idols and all-time hip-hop favorites in such short succession, but thankfully the Green Eyed Bandit pulled through. One could read “Breath of Fresh Air” as a celebration of his survival. Although the cover art looks like it’s inspired by marijuana and boombox mixtapes, there’s little doubt he had the air of life put back into his lungs at the hospital. You really can’t get fresher than that.

As an aside, I don’t normally like to get on a soapbox about health issues, but I’d like our readers and rap legends alike to take this shit more seriously. If you’re over 40, get a physical once a year. Take your vices in moderation. Nobody says you have to become a vegan hippie, but a little daily exercise isn’t a bad idea, and lifting the remote to watch TV doesn’t count. If anybody in music should be a caution to the dangers of drug abuse, let Whitney Houston be your example. Let’s hope that the pioneers of hip-hop live to a ripe old age so that we can celebrate their achievements, while at the same time receiving their guidance to continue this music and culture. I’m done.

“Breath of Fresh Air” makes me hope E Double will heed that advice, because eight years is too long to wait between solo albums. Yes – there was at least one EPMD album in the interim – but even though E and P squashed their beef I’ve gotten used to listening to Sermon solo over the years. It’s not as though he doesn’t have a competent crew of compadres to guest on songs with him, and virtually all of them seem to have shown up for “Breath of Fresh Air.” Songs like “Look” featuring Method Man and Redman sounds like a throwback to the halcyon days of Def Squad’s “El NiÃ±o” crossed with more recent “Blackout” steelo:

Redman: “Aiyyo I am hip-hop, look through the lens
My fitted cap got the gold sticker on the brim
I look like a 8, but I flow like a 10
The new jack that got G money on the stem
I started in nine-two, back in the 2G
Funk Doc teach ’em all, +How High+ the movie”

Method Man: “I’m like Selleck with the +Magnum+, without the +P.I.+
This grown folk B.I., llama tucked in my Levis
This Killa Bee, keep a honeybee in the beehive
The type that beat her seeds and bring you weed on the D.I.
I’m on that +Grand Hustle+ my dude, shout out to T.I.”

Erick Sermon: “Play with the King of Pop, I’m +Dangerous+
I shoot the Glock, but I prefer the stainless
I ain’t even deep, that’s Red and Meth I came with
Red and all blue, just them two, I bang with
I keep pursuin this, so don’t get angry
I’m +Unpredictable+, sometimes they call me Jamie – baby
So when see me comin be on your best behavior
Cause it’s too early for you to be meetin the savior”

Too early for you too as well E-Dub, and tracks like this one are the reason why. There’s no shortage of collaborations on this one. Keith Murray and 50 Cent work female double entendre for “Headgames,” with Sermon proudly proclaiming “Trick! Ain’t nuttin changed since +Gold Digger+.” East and West coast collide on “Commander N Chief” featuring Daz Dillinger, with a bouncing Cali beat he very well could have produced. (Unfortunately there are no liner notes to confirm that.) Sheek Louch represents for D-Block on the bangout song “Dodge This.” Wait a minute though – I’ve heard some of these guest appearances before. The song labelled “Like Me” is actualy “Buy U Some 2” from Too $hort’s “Pimpin’ Incorporated.”

Sermon: “Understand we back, rap mack, I’m Goldie
I’m an oldie but goodie, in jeans and hoodie
Outside is the Benz McLaren, the doors lift up
Next week the new Bentley Coupe I’ll pick up
A chick like Jessica Rabbit lays in back
Young Lloyd in the back serenadin the crack
Yup, ask my nigga X man, “I’m vanglorious”
Nigga they call me ex-land, dough before sex man
I spend cash when I want and you save
I’m a peeeimp, it say that on my Banner, ask Dave
My favorite color is blue, but I ain’t crippin
I like Too $hort too, but +I Ain’t Trippin+, uhh”

That makes me suspect other tracks like the KRS-One song “Clout” are reused from other sources, but at least with that song specifically I can’t find proof of it. There are definitely re-appropriated beats though – “Ain’t Me” featuring Rozey reloops the same samples as Junior M.A.F.I.A.’s famous “Get Money” remix. “Lil Nikki” with Twon Gabz borrows directly from “1-9-9-9” by Common & Sadat X, which I’ve included below simply because hearing it again made me catch flashbacks. Since “Breath of Fresh Air” is a free download, you can compare the two for yourself, but “ain’t no payola in freestyle.”

That’s the problem with jacking the same beats as hip-hop classics – you always run the danger of suffering in comparison to the original – and Twon Gabz is no Common or Sadat. Considering how renowned Erick Sermon is as a producer, I would not have expected his beat bites to be this obvious, but without liner notes I’m willing to give him the benefit of the doubt that this may not have been his work. What can’t be excused though is his desire to put third tier Def Squad proteges like Sam Bo and T.R.E. on this mixtape, the latter of whom in particular sounds like a lesser DMX rapping over one of Ja Rule’s better known instrumentals (“It’s Murda” which coincidentally features DMX). While I can appreciate his generosity to the new generation of emcees, it’s not them I came to hear, and they don’t impress me enough to want to hear them again.

I don’t intend to beat a dead horse here, because after the events of 2011 I’m happy to have Erick Sermon back in any shape or form. It may be that my expectations for “Breath of Fresh Air” are slightly high as a result, but again after 8 years there’s no reason that they SHOULDN’T be even if he hadn’t had a big health scare. When E Double is being E Double on this free LP, a great time can be had by all, but at times that comes at the expense of originality and at others at the expense of featuring rappers who don’t have as much personality and swag as hip-hop’s funk heavyweight. If this is just an announcement of his return and not the full dosage we can expect later this year, it is at least a promising start.