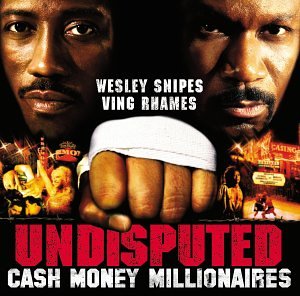 Another movie, another soundtrack. This time, the film starring Ving Rhames and Wesley Snipes is brought to you by the Cash Money Millionaires. They are the “Undisputed” primary force behind this Cash Money label release, as they appear on half of the CD.

The non-CMB artists who appear on this album are what shake it up and make it interesting. “Let Me Ride” by Trick Daddy and Rick Ross carries on a funk tradition started by George Clinton and continued by Dr. Dre. “Hungry” by Bubba Sparxxx is a track from the original Athens, GA release of “Dark Days, Bright Nights” before he linked up with Timbaland and picked up nationally. “Que La Cosa” is Petey Pablo at his North Carolina growling and shouting finest. The underrated Benzino raps over the Hangmen 3 produced “Go Hard.” There are also R&B tracks by Carl Thomas and Teena Marie (“How Did I” and “Shorty Down” respectively) if you’re into that sort of thing, but they’re momentary lulls on an album that’s decidely dominated by hip-hop.

Of the CMB tracks that fill the rest of this compilation, some are worthy of the exposure and others just sound like Mannie Fresh leftovers. The title track of “Undisputed” is one of the best, and other worthy tracks include “Real Talk” by Lil Wayne, Boo & Gotti with Baby on “Ride Together” (no Kelly and Hova this time) and the heavy Mel-Man-esque funk of “I Walk It” with Stone, Gilly & Lac. Skippable cuts include “We Drop It” by the Big Tymers, “Bout My Paper” by Baby and others (it’s the “and others” that sinks it) and singer TQ’s “Think About You (Looking Through the Window).”

If you ask me what any of the songs on this release actually have to do with the movie “Undisputed,” I couldn’t tell you. These days, most rap soundtracks don’t even bother with the pretentious “music inspired by the motion picture” title, and just give you what other than a movie tie-in would be a record label or group’s latest compilation album. It’s a safe bet that at least one of these songs may be in the movie SOMEWHERE, but does it really matter? Of course not. The more pressing concern is whether this album is worth $12-$18 at your local record store. In one sense, this album will please nobody – not enough Cash Money tracks for their fans, not enough non Cash Money tracks for those who aren’t. On the other hand, if you’re a broad-minded hip-hop fan you’ll appreciate the best non-CMB songs on this album as well as the CMB ones that best showcase their talent. For the latter group, “Undisputed” is meaningless as a movie tie-in, but good as a mixtape to bump in your ride through summer’s waning days.