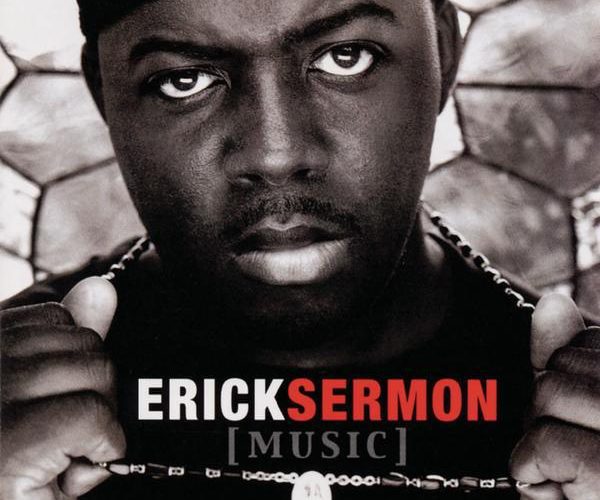 Erick Sermon’s been great since 1988 – and that’s not just a rhyme, that’s a statement of facts. As one half of the rap powerhouse duo EPMD, his slippery slurring raps and sonic funk earthquakes behind the boards produced hit after hip-hop hit. So revered was the duo of Erick and Parrish Makin’ Dollars that split in 1992 reached a level of disbelief comporable to when The Beatles split. It was simply incomprehensible – an impossibility to accept.

What has followed since has been a strange up and down journey for the self-dubbed Green Eyed Bandit. He recorded two solo albums: 1993’s “No Pressure” and 1995’s “Double or Nothing.” While both albums enjoyed more success on a solo level than ex-partner PMD’s solo ventures, neither one achieved EPMD’s previous heights. Erick kept busy though, producing beats for favorite rappers Redman and Keith Murray both as soloists and as members of his supergroup Def Squad. The workaholic Sermon even attempted a couple of EPMD reunion albums – the lukewarm “Back in Business” in 1997 and the unfortunately forgettable “Out of Business” in 1999 – the album whose ironic title permanently closed this chapter of rap history. He even created a new alter-ego and rapped as “Erick Onasis” on an album presented by Def Squad in 2000.

One way or another, Erick’s always had his finger on the pulse of hip-hop. It should come as no surprise then that after over a decade of making hits for himself and others, Erick scored one of his biggest hits yet with the song “Music.” Featuring beautiful vocals lifted from the late great Marvin Gaye and a funk track perfect for cruising or dancing, the song raced to the top of hip-hop and R&B charts all over. Sermon’s song appeared on the otherwise forgettable movie and soundtrack “What’s the Worst That Could Happen?” and those who compiled it should be eternally grateful to him for moving their units. This song was too big for one soundtrack though> It gave birth to the solo album of the same name, the first under his own name since 1995.

It’s been a strange year for Sermon – despite the success he already scored and what’s bound to be a big album he was in a car accident that was so severe his jaw had to be wired shut. At least, that’s the official story – the unofficial story is that he jumped out of a third story window to avoid a jealous boyfriend or attempt to commit suicide. Neither of these rumors seem credible – for one Sermon is pretty diesel in build and could easily go head up with any challenger; for another Sermon has little to be depressed about. Featuring the return of recently un-incarcerated Keith Murray on three tracks and Redman on two, “Music” gives his fellow Def Squad members shine without allowing them to overshadow the E. Clocking in at forty-seven minutes, this album longer than it might actually seem – lots of funk and little filler.

It’s possible that the Marvin Gaye connection might get tired though. Three of the songs on the album have Gaye spliced in: the original “Music”, a remix with Keith Murray and Redman, and the latest single “I’m Hot.” While all of these songs are good, this is a format that should be permanently retired after this LP. It’s the more surprising tracks like “Up Them Thangs” with Cadillac Tah and Keith Murray that will grab your attention; this one in particular is hard enough to be considered hard rock. Erick Sermon always manages to make even the most overused samples breathe new life – as witnessed on the Roger Troutman funk of Erick’s 2001 update of MC Breed’s “Ain’t No Future In Your Frontin’.” (Incidentally, where’s Breed these days? It would have been great to see him duet with Sermon on this track.)

Though there’s plenty to like, such as the humerous “Genius E Dub” that resurrects a funk beat not seen since the Furious 5, and the subtle vibe and introspection of the aptly named “The Sermon” with some tight R. Kelly samples, you can’t argue that it’s perfection. “Do-Re-Mi” with LL Cool J and Scarface should have been tight, but ultimately falls flat. “I’m That Nigga” is about as blase as it’s title would indicate, and guest rappers Khari and Daytona on “It’s Nuttin'” haven’t earned the right to rap on an E-Dub track. The naysayers will undoubtedly make the same comments they do on any Erick Sermon plate – the funky beats retread too much familiar ground, and Sermon’s not a mind-blowing rapper. Erick Sermon is the Too $hort of East coast rap though – he knows what works and he sticks to the script. What’s wrong with that? It may be a matter of taste for some, but if you’ve been down with the Green Eyed Bandit since he taught us how to do the “Steve Martin” dance, this album will be right up your alley.