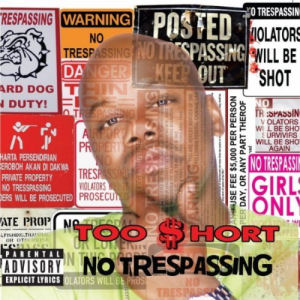 Too $hort :: No Trespassing

It’s not easy to start a Too $hort review at this point without a cliched explanation of his veteran status, an obvious acknowledgment of the size of his album catalogue, and an apology to the feminists reading for his misogynistic lyrics. Even though it’s dangerous to make assumptions, I’m going to break the fourth wall here and assume you know who Todd Shaw is, and exactly what he’s been about for the last 30 years+. If that turns out to not be the case, and you really need to be put on game, I recommend the following reviews from out large catalogue of coverage: “Born to Mack,” “Short Dog’s in the House” and “Married to the Game.”

Now let’s move on to “No Trespassing,” which is at least his 19th album, although there may be more if you count extended plays and compilations. Speaking of EP’s, “Respect the Pimpin’” was partially recycled for this release along with the album “Still Blowin’.” I can understand the motivation since those albums flew under the radar for some of his fans as digital-only releases. For the sake of full disclosure though you need to know that not everything on this album is brand new material. The title track of “Respect the Pimpin'” featuring Snoop Dogg is included, along with the freaktastic sex romp “Porno Bitch” from the album prior. Out of 17 tracks total that’s not overkill, but it still needed to be made clear.

One thing Mr. Shaw has clearly learned from his recent releases is that guest stars help keep him relevant to both long-term fans and brand new first-timers. He acknowledges fellow Oakland legend Richie Rich by revving engines with him on “Hog Ridin,” dips to Pomona to collaborate with Kokane on “Shut Up Nancy,” and for the album’s first (and reportedly only) official single we take a trip to Vallejo so long-time friend E-40 can bust a rap with him for “Money on the Floor”:

Too $hort: “All that sexy dancin
The hair and the dress is so romantic
It’s so sexual
Wiggle that body girl, let it go
It’s got me intoxicated
Like drugs, it’s got me faded
The visual is amazing
3D digital entertainment!”

E-40: “She don’t believe in wearin panties under her skirt
No bra under her shirt, I like the way she twerk
This your one right here baby, this your motivation
Make your cheeks applause like a standing ovation
Got my dick hard like incarceration
Let me buy you a drink – intoxstication, hello!!”

Too $hort isn’t just rolling with the veterans his age though. He’s also got the aptly named Rico Tha Kidd on “Cush Cologne,” a humorous track where women are attracted to his funk as well as his pimp. Rico and his friend DJ Upgrade also appear on the album’s final song “Ba Boom Cha,” which features a massive line-up that only has 210 seconds to get their licks in – DB Tha General, Prince Lefty and Yung Lott among others have to find their spot. I hate to disappoint them but it’s far easier to remember and identify Too $hort’s guests when there’s only one on a song, like Too $hort’s “The Magazine” featuring Chase Hattan. While he does his own version of T-Pain on the hook (not as good but it will suffice) the original Oakland mack talks about a woman who regrets her choices in life:

As an idea of women’s lib, Too $hort and Chase Hattan’s repeated refrain of “could’ve been a Playboy bunny” is an interesting interpretation. I have a feeling an ardent feminist would still argue that exploiting a woman for her physical assets to sell adult entertainment is just as misogynistic as the song’s male antagonist, but it shows that even after all these years there’s more to Todd Shaw’s psychology than his use of the word “bitch.” In fact observers would note Sir Too $hort has at times advocated a form of reverse pimping, where the women exploit men instead of the other way around, or at the very least give just as good as they get. If we had more time I could go deeper on this topic (pun possibly intended) but let’s just move on.

For the most part “No Trespassing” isn’t breaking new ground – and that’s fine given Too $hort fans don’t really expect him to. They’ll appreciate the booming bass and sexually explicit themes of “Playa Fo Life” featuring Beeda Weeda and Dom Kennedy, the guest appearances like 50 Cent, Devin the Dude and Twista on “I’m a Stop” and the classic Todd Shaw sound of “Boss” featuring Silk-E. If you expected Too $hort to reinvent the wheel, you picked the wrong rapper let alone the wrong album. If you’re fine with his pimpology and appreciate his Oakland swag, you picked the perfect album. It’s neither the best nor the worst version of Too $hort we’ve heard so far, it’s just the version 2012 found acceptable – and that’ll do.