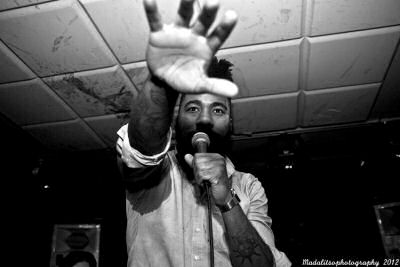 If you ever get the opportunity to see F.Stokes perform live, after he’s done, walk up to him and say hello. He is, by far, one of the most approachable artists in hip-hop, and the conversation that will ensue will likely be enjoyed by both parties. You see, F.Stokes doesn’t just dish out great insights in his music, he soaks them in, as well, and as a lover of people he truly enjoys these interactions.

With that in mind, it’s apropos that he titled his latest EP Love, Always. This week RapReviews caught up with F.Stokes to find out more about the album, his unique relationship with his fans, and how he grew from a tumultuous childhood that included a nomadic lifestyle and an incarcerated father, to be such a kind, well adjusted, individual. F.Stokes also revealed why he thinks some artists need to take a step back and see their true place in the world.

Adam Bernard: If people were to know only one thing about you what would you want it to be?

F.Stokes: That a good question. I guess (I’d want people to know) that I think the world is my stage. What you see just an extension of Rodney Lucas the human being. I don’t wake up and put on my rapper face, if that makes sense. I don’t grab the microphone and then become a rapper. That’s just me amplifying my thoughts through a different outlet, and whether I’m performing in front of my mother’s mirror with a brush in my hand, or on stage in front of 3,000 people in Europe, it’s still the same authenticity, it’s still the same passion, it’s still the same sense of deep commitment to conveying my message.

AB: What do you hope people say about you behind your back?

FS: You know, I really don’t care, positive or negative. Of course the positive energy is always welcome, and at times it serves as fuel for this makeshift of an engine I’ve put together, but I think it’s important that, as artists, we don’t forget that we’re not that fucking important, or that special. What makes this thing special is that I’m able to do something that’s so convincing on stage that you want to interview me and hopefully some kid is going to read this interview and be inspired to do something with his life. I’m just the vehicle. I’m not performing open heart surgery or curing cancer, and I think we have to keep that in perspective because too many artists feel they’re way too fucking important when really we’re the vehicle and you’re the guys helping us drive this thing.

AB: It’s interesting that you say everyone else is driving the vehicle, because you have a fairly incredible connection with your audience. They’re almost not just fans, but friends.

AB: How has that relationship developed for you over the years, and do you think you can maintain it as your fan base continues to grow?

FS: I think, honestly I don’t know how to maintain it when you get to a certain level, but I feel like there’s a basic recipe to making people feel special. Whether that’s answering as many personal messages as possible, or giving guys the opportunity to do features with me. I do know the bigger I get, the bigger the platform becomes, the more red tape, so to speak, there will be between me and my fans, and I think my fans are smart enough, and are wise enough, to understand that movement has to happen for me to be able to spread this message around the world. I think my fans genuinely want to see me be able to buy my mother a house, or be able to pay for my little brother’s lawyers, or to be able to pay for my father’s lawyers, because they understand my story. So once the next step comes in where I’m making enough money, or have a big enough stage to generate enough finances to actually put those things into perspective, I think it’s more my fans being proud of me as opposed to being pissed off that I can’t continue, or nurture, an intimate connection with most of them.

AB: Let’s talk about your story and your message. Tell me about your latest EP, Love, Always. What are you giving listeners this time around?

FS: This time around it’s interesting because I was able to record this EP in a number of different places. It’s ultimately a hybrid of pieces I’ve done over the past couple years. There was a song recorded in Paris, a song recorded in LA, Minneapolis, Chicago, and Madison, WI. I think that this is probably my most cohesive piece of work to date as all the songs form somewhat of a body of material as opposed to just random cool hip shit. I think the listener is gonna learn a bit more about me as a person. The song “Decades” is an extremely personal song. Parts of it were written at a time when I was around a lot of single white mothers, and they were single white mothers raising mixed babies of African-American descent, boys in particular. I saw these purebred, Wisconsin, white women raising these kids because the father was either in prison, or out of the life of the family, and I thought it was really fucking impressive how a white girl with possibly no background in the African-American aesthetic, besides the fact that she fucked a black dude and had a baby, had the balls, had the strength, and the willpower to raise a son that would face the same conditions that I faced as a child growing up. I think that’s really impressive, and I think that’s not talked about enough. It still goes back to the irresponsible actions of young African-American men and how it just doesn’t only affect the black family, but it also affects the white woman, as well. So when I hear V-Nasty use the word nigga, and I don’t agree with it whatsoever, and it should not happen, but it’s because she’s ultimately been through the same shit that black women have been through. She has a baby by a black dude, so (saying that word) comes from pain. That comes from the pain inflicted by the black man walking out of that family’s life, not being a father, so on that level she can exactly connect with my sister, with my aunt, with my mother, and I really hope this is making sense because I want people to get it.

AB: It is making sense. You seem to know a lot about people, and you have been touring a lot over the past few years. What have you learned about people from those travels? Is there a general statement you can give?

FS: Not at all. The beauty of it is that we all have our own individual stories. It’s like raising a family, you don’t use the same practices with one son as you do with another one. One may be a bit more needy than the other one. One may be a bit more depressive, the other one may be a bit more outgoing, etc. etc. I think people are extremely complex and different, and one of the great things about my job is I’m able to get on stage and somehow figure out a way to engage that crowd on a level that we all can connect on, because I feel like on a very basic, primitive level, we all go through the same shit. Even though the kid in Austria or Germany might have watched different cartoons than us growing up, the fact that his father is out of the house, or his mother’s addicted to a narcotic, or whatever have you, in a sense makes us brothers, make us equals.

AB: I know you didn’t have it easy growing up. You bounced from around a lot, your father was incarcerated. How did you come out of all of that so well adjusted?

FS: You know, that’s a good question. I had a really good mother. My mother’s like a genius. She doesn’t get enough credit for the values and sense of morale she instilled in me early on. I think my mother paid a bit more attention to me than she did my other siblings because she knew I was special, she knew I was a bit vulnerable, she knew that I had this streak of lavender in me, so to speak, and she did a really good job, her and the rest of my family, of preserving that, and defending that, and also protecting that. So even though I was in the ghetto, and I grew up in some of the harshest conditions known to mankind, I always had this sense of protection around me because my family knew there was something special about me, there was something global, there was something explorative about me, so I really have to give credit to my family. I love those guys, and it’s interesting because even in the ghetto the sun still shines. The sun is universal, and whether you live in the Upper East Side of Manhattan and your family is worth a billion dollars, or you live on the South Side of Chicago and you sleep with roaches and rats and it’s you and four of your siblings on the same bed, when the sun comes up it’s an equal opportunity type deal. You can still raise your head and see the sun, and I think that, metaphorically, is just so powerful. I was always able to see the light, see the positive, and create somewhat of an optimistic outlook on most things.

AB: Finally, staying with the positive, where has been the most interesting place music has taken you?

FS: I would love to say somewhere exotic like “I was in Australia one time and I had a show on a beach and it was wonderful and blah blah blah blah,” but I think the reality of it is that I always have a great time going back to one of my hometowns of Madison, WI, and performing at a place called The Majestic, which is right around the corner from the YWCA, which is a battered women’s shelter. My mother used to live in that same shelter, so to be able to perform in one of the bigger venues in the city that’s essentially across the street from where my mother ran to escape an abusive relationship always holds a special place in my heart. It shows our journey, it shows my journey, it shows victory, in a sense.