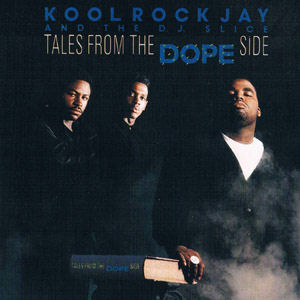 Kool Rock Jay and the DJ Slice :: Tales From the Dope Side

By 1990 Jive was a brand a rap fan could trust, the label’s roster including Whodini, Kool Moe Dee, Boogie Down Productions, Schoolly D – and Too $hort. The latter comes invariably to mind when listening to Kool Rock Jay, and that’s without getting treated to any ‘freaky tales’ whatsoever. Besides thanking the City of Oakland in the liner notes of “Tales From the Dope Side,” Kool Rock Jay explicitly says that he’s from “the Oakland town” and refers to Too $hort as his partner. Oakland promoter Lionel Bea (Bay Area Productions), who booked $hort’s early gigs, even gets an executive producer credit.

However, both the New York Times and Bay Area journalist Davey D located the duo in Fresno. There is definitely a connection to Fresno as not only the album was partially recorded there, but the two were part of electro outfit Matrix, who were signed to Fresno-based Jam City Records (which was also in some fashion involved in “Tales From the Dope Side”). Wherever they may have been originally from, Kool Rock Jay and DJ Slice sealed their partnership as early as 1986 with the single “Slice it Up” b/w “Check it Out.” After the stint with Matrix they were back to a duo, putting out a second single, “It’s About Time,” in ’88 independently before landing the deal with Jive and releasing the lead single “Notorious” the next year. “Notorious” was a relatively hard track, opening with a slow, sinister synth bassline and DJ Slice cutting up L.L. Cool J belting “I’m notorious!” As soon as the rapping begins, loud, cascading keys are cued in as Kool Rock Jay goes to war with a fairly standard arsenal of battle raps:

“Kool Rock Jay back in yo face
with a hit of the snare, a kick of the bass
So you better be cool and take a listen
‘fore I explode in your face like nitroglycerin
Suckers are saps, you don’t flatter me
You’re corrodin’, punk, like a battery
I track suckers down like a bad state trooper
Dig into your mind like Roto-Rooter
Came to explain Kool Rock Jay is the name
To rock a party all night will be my claim to fame
It’s either you or me, cause I’m a fresh MC
I’m not a sucker or sap or a wanna-be
I’m on a journey like Captain Kirk
So when I hear a beat I cold go berserk
Terrorizin’ punks all across the map
and make ’em keep in mind like a photograph
(I’m notorious)”

Dubbing himself “a hip-hop gangster” like Cool J four years prior, Kool Rock Jay didn’t make gangster rap in the now traditional sense of the word. But like other rappers before him, he used ‘gangsterish’ elements to add weight to his statements. “Suckers to the Side” effectively interpolates the horns from Henry Mancini’s ‘Peter Gunn’ theme, giving the track a distinctively criminal feel. Combined with Kool Rock’s cold delivery, it’s musically much more effective than lyrically.

Since Too $hort never even came near a gangster image and Kool Rock Jay was just a little bit of a player but certainly not a pimp, why the comparison? For one, the vocal tones are very similar and they rap in the same soft-spoken style. Secondly, they tackle the serious side of life in the same matter-of-fact manner. Especially the opening tracks of “Tales From the Dope Side” recall the Too $hort of “Life Is…” and “City of Dope.” On “It’s a Black Thing,” Jay drops stringent social commentary over a bluesy interpolation of the ivories from Barry White’s “I’m Gonna Love You Just a Little More Baby”:

“Just the other day I heard an old man say
somethin ’bout history that wasn’t okay
Talkin’ ’bout slaves and how we used to be
Somethin’ Kool Rock Jay refuse to be
Tell me ’bout somethin’ that I can handle
not about Nixon and the Watergate scandal
Tappin’ phones, watchin’ homes
Stand up for yours and you’re on your own
Time won’t stop, prices won’t drop
That’s the way it is, whether you like it or not
Farrakhan, Dr. King and Malcolm X
Stood up for blacks, so tell me who’s next?
[…]
I drop knowledge, but I never went to college
Problems in my path I smooth demolish
What’s up with that, cause I’m not the wack
My skin is brown, but my race is black
They say we rob and steal, they say we shoot and kill
I’m sellin’ records makin’ dollars, so get for real
They try to front, because they don’t know what time it is
Black is beautiful, that’s how fine it is
Come on everybody, please pay attention
Tryina play dumb with no comprehension…”

Set to a hypnotizing combo of synths and pianos and lots of low-end, “Too High” talks sense to drug dealers but may be short of one verse to be a truly compelling cautionary tale. The title track only narrates how ‘dope’ the Rock is, but “All About Money” succeeds as a song thanks to structured verses from different perspectives.

For the rest of the record he sticks to battling interspersed with bragging. Boasting to be “compatible with any beat, pace or metronome,” he’s actually an adept rapper who even has a playful side, as shown over the sparse swing of “Easy as 1, 2, 3” – which also reminds us of the Bay’s flair for slang: “Now some say it’s beatin’ and others say it’s slammin’ / Mix ’em up both and say it’s blammin’.” “Servin’ Em Well” is the second song to sample Cool J as his near namesake raps, “Hip-Hop’s my home, if you couldn’t tell / I’m Kool Rock Jay – and I’m servin’ ’em well.” “Jay and the Boys” borrows heavily from “Mothership Connection” and curiously states that “Kool Rock’s discussed over coffee and tea” – because he’s a “dope MC.” Talk about mainstream appeal there…

The 21-year-old never depicts himself as more than a MC and doesn’t hesitate to surrender the spotlight to DJ Slice, who cuts up a variety of rap samples on nearly every song. Lyrically, however, he’s as basic as it gets as far as still coherent rapping goes. That does lead to some compelling couplets (“Bullets flyin’ / brothers dyin’ / mamas cryin’ / and I ain’t lyin'”), but highlights like “My neighborhood was torn, black knowledge scorned / It still didn’t stop me, word is bond” are few and far between.

He also lacks Too $hort’s sense of humor, the wit and irony that the latter regularly displayed. To say that Kool Rock Jay would have been the outcome if Too $hort never discovered the popularity of ‘dirty raps’ would be grossly underestimating Todd Shaw’s rapmanship. Still, and even though Fresno may have played some part in Kool Rock Jay and DJ Slice’s musical conditioning, “Tales From the Dope Side” gives off a strong old school Bay Area flavor, not only because of the general similarities in $hort’s and Jay’s rap style, but also because it confindently balances samples (drum breaks incl.) with synthesizers, last but not least with the help of Dangerous Crew collaborator Al Eaton.

Kool Rock Jay and the DJ Slice :: Tales From the Dope Side
5.5Overall Score
Music6.5
Lyrics4.5