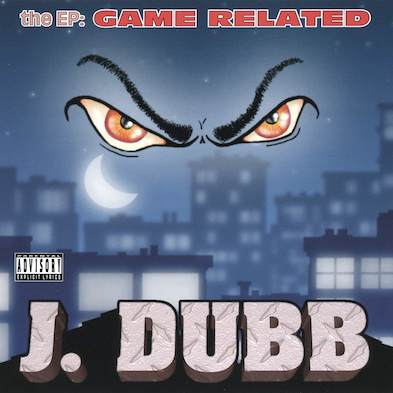 Not to create the impression that I’m cyber-stalking dude, but this is my third review of the same rapper in as many weeks. An artist who has lingered in the shadows of local rap for decades and who personally might not see the point in receiving lukewarm reviews years after the fact. Well, such is RapReviews.com. We take rap seriously like that.

The rapper formerly known as Kool Rock Jay made a re-entry into the game in 1995 as J. Dubb. High profile appearances were still ahead of him (on several Ant Banks compilations and the “Straight Outta Compton – 10th Anniversary Tribute”), but the “Game Related” EP sported some prominent cameos itself. Spice 1 and Too $hort join Jay on the opening “Trouble,” which is notable for $hort’s verse that catches him in the middle of a quarrel with the Luniz and Dru Down. Short Dog’s also on the hook to “I’m a Player,” which sounds a lot like Ant Banks but is actually by fellow Oakland producer Terry T. Ant Banks is still a key figure here as he mixed the entire EP at Oakland City Studios in – Atlanta, GA, at the time Too $hort’s adopted home.

Without going much into detail, J. Dubb himself clears up any doubts about where exactly he’s from on “Where it’s At”:

“I got a boatload of hoes on my tip
They fetchin’ a fit because a brother’s gettin’ a grip
But I don’t trip because I know where they stand
I got the upper hand and a plan for a blackman
Peace out trick, I’m sideways to the next light
Waitin’ for the day that I can blow up the next mic
Ridin’ a drop-top on the Bay Bridge
Dreamin’ of livin this way since I was a kid
An East Bay player raised in the Oaktown
Moved to the No-Town and things just slowed down
You have to adapt to the rap that I’m kickin’
The 209’s a little smaller but still it’s the same old game
of hustlin’, strugglin’, smugglin’, tusslin’
with them white folks who abuse they authority
and try to keep them shackles on us young black minorities”

Despite having been around (notably to Fresno), J. Dubb continued to call Oakland his musical home. On “Where it’s At” him and Father Dom mellow out to a smooth groove laid down by a backing band that includes Oakland saxophonist J. Spencer, who released a couple of hip-hop influenced jazz albums on Motown. Omitting further musical guests, the rest of the beats are rather average, monotone funk tracks.

Artists have the right to reinvent themselves. During the time of “Tales From the Dope Side,” Jay’s vocals evoked comparisons to Too $hort, five years later the similarities were gone. On “Street Life,” he observed said life from what looked like a safe distance, on “Game Related” he didn’t feel too safe himself (see “Foreal” and “Game Related”). His message however remained remarkably consistent, right down to the – faint – political undertones.

Still Leo Ramsey largely went with the flow throughout his rap career. There’s no reason to assume he wanted to keep his past as Kool Rock Jay a secret, he may have simply felt it was time for a name change. The rest of the modifications came probably automatically. Rap changes, and so do rappers. BUT – the most successful rap artists at least at one point go against the grain and they build their brand over an extended period of time. The vast majority, among them J. Dubb a/k/a Kool Rock Jay, place as also-rans.