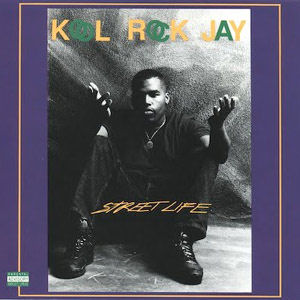 In 1991 a young Bay Area rapper by the name of Spice 1 released his debut EP on Oakland-based Triad Records. The buzz it generated led to him being signed by Jive Records, where he became one of the West Coast’s premier MC’s. As Spice was releasing his first full-length in 1992, his former label put out an EP by Kool Rock Jay, who had just come off a deal with – Jive Records. After his LP with DJ Slice, the Rock continued independently and solo. Slice and unofficial third member Nate the Great are shouted out in the liner notes but seem to have given no musical input. Engineers Al Eaton and Chip Harris were still on board, so it wasn’t a complete break with the past.

For the most part Kool Rock Jay stayed true to the persona he established on “Tales From the Dope Side” – but there were some adjustments. The title track is a typical cautionary song but highly listenable largely thanks to the Barry White sample and the background singers’ surprising Crusaders interpolation. Verses two and three work well as Jay tells a teen mom to “wake up and smell the orange juice / because you know you shouldn’ta been so loose,” while a knucklehead is told, “Brother, you pulled the trigger all by yourself.” But verse one makes little sense when fourteen bars detail a drug dealer’s lavish lifestyle and then the last two suddenly state, “Next time you better think twice / because it’s hard in that street life.”

Then there’s “Bitches in the 90’s,” which isn’t exactly out of line in ’90s rap music and even promotes safe sex (“I almost forgot my contraceptive / It’s the ’90s and it’s time to get sceptic / So if you forgot your protection / skip that affection and keep that erection”), but as a whole is really below the character Kool Rock Jay presented previously. In typical contradictory fashion, he will talk about “African queens” a few songs later. And on a wanna-be humorous song that is not really all that funny he comes across merely unintentionally funny when he disses a female and then offers, “You got upset / But don’t leave now – we ain’t fucked yet”…

“Break Yourself” features a rare appearance by rapper Seagram and is the only song here where Jay uses the n word. He essentially indulges in gangster fantasies and it’s up to Seag to bring some relevance to the track. There is some speculation about Kool Rock Jay’s ties to Oakland, but Seagram is the type of rapper to let you instantly know where he’s coming from, rhyming, “My Magnum still bustin’ like a cannon / steady sendin’ suckers and busters to C.P. Bannon / That’s a funeral home / for those who don’t roam in the O.”

Sampling “Superman Lover” isn’t particularly inventive, but it works for the purposely stealthy “Break Yourself.” Other musical decisions are more questionable. Take “Mr. Slow Flow.” It’s one thing to lift a loop from another rap track (EPMD’s “So Wat Cha Sayin'”) for your own beat, but to simultaneously jack an alias from the same artist (PMD already dubbed himself Mr. Slow Flow in the ’80s) is not the hip-hop thing to do. What’s more, “Mr. Slow Flow” is an uptempo track in comparison to the rest of his material. Evidence had at least the sense to f/l/o/w s/l/o/w on his track with the same name from ’07. The commendable thing about “Mr. Slow Flow” and the following “Brothers Gotta Get a Grip” and “You Don’t Hear Me Doe!” is that they contain explicitly positive messages. Still the songwriting remains a weak spot and the recycling of samples doesn’t help either. “Street Life” was supposed to be the prelude to an album named “Concrete Jungle,” but with his old fashioned style Kool Rock Jay got lost in the shuffle as West Coast rap continued to expand in all kinds of directions.