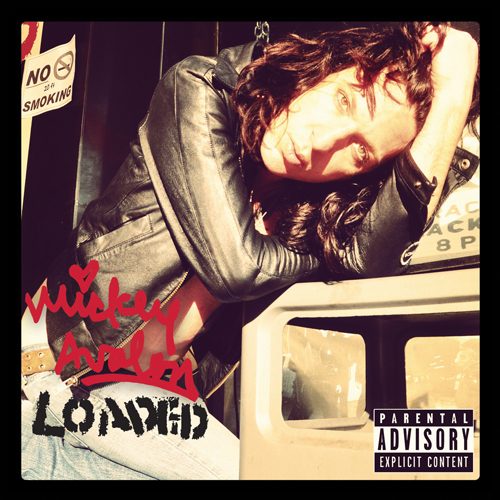 I want to throw out a shout to Mickey Avalon right at the start for doing an interview for RapReviews with Adam B. He could just as easily have told us where to go given this site absolutely SAVAGED his self-titled debut. Now I’m not telling you to read our last review – that’s up to you – but when Arthur Gailes described him as having only “the slightest hint of personality” and “among the worst production ever put on record” his hip-hop career was to me an open and shut case. It was the fact he was open-minded enough to talk to us after such a scathing critique that in turn made me open-minded enough to give his new album a spin. Other factors working in his favor: 1.) five years is a long enough time for even someone wretched to become a decent artist and 2.) SubNoize probably wouldn’t sign someone to a deal they think would put out an unlistenable album. Let’s start with the first single off “Loaded” then entitled “More Junk.”

“Bitch was THICK! Thirty-six in the hips
with teardrop tits and some dick-suckin party lips
Pardon me miss – is this seat taken?
I’ve been watchin from ‘cross the room you shakin it
For Christ sakes, with a face like that
hows your daddy ever hold you back?
I’ve got the big white Caddy and it’s parked in your lot
I’ma drive you ’round and ’round the block
Lock the doors, sit back, recline
and tell the Av’ what’s on your mind
It starts ‘tween the legs and crawls up your spine
Pet that kitty, turn the cat into a lion”

Now the snarky among the readership might find this lyricism unimpressive, and I’m not here to impress upon you that Avalon has suddenly turned into Shakespeare. What I do find though is that the press release for his album was entirely accurate about this song – it has both “sleek electro-synth beats” and “playfully spit” rhymes. This is not the music of a revolution, and Avalon is certainly not part of the 99%. The theme of “Loaded” is the 1%. I’m not sure if Avalon was living this lifestyle before he became (in)famous, but I’d bet that an Interscope contract and touring with the likes of Red Hot Chili Peppers led to songs like “Drugs.” Mickey revels in excessive hedonism to the point it’s almost self-parody, reaching a Jon LaJoie grandeur with these words:

“Class clown, but nobody laughin
Avalon, put it on the plastic
Corny bastards caught in traffic
I take Fontaine and get there faster
while a black crackhead tranny licks my ass-crack
in a black Trans Am with a crack tranny, black!
Your shit is whack”

There’s no chance Avalon can’t be in on his own joke here, particularly when he calls himself “the white Jay-Z” just moments later. That suggests Mickey is in fact worthy of a second chance. The duality of the music is striking – he could be mocking and living a Ke$ha lifestyle at the same time. One can never be entirely sure which at any time. “Ca Crack Cocaine” may say it all: “I’m living the American dream/I got the shit that’ll make you scream.” You don’t have to look long and hard to draw a comparison to Beastie Boys era “Licensed to Ill” style music – white boys who liked to party just as much as they liked to rap.

Now in the interest of being fair, I’ve given Mickey Avalon some props on being the master of his own domain – and in that domain “Loaded” works. In the larger context of making music which can be considered art, I have to be a little less forgiving. Since this is a pre-release copy I don’t have production liner notes, but the music is hit and miss. The very fact SOME of it is “hit” makes it better than his last CD. Among the tracks I could enjoy listening to as instrumentals alone are the keyboard laced “Funeral,” the trashy rock guitar vibe of “Take Me Home,” the crunk “Tight Blue Jeans” and the two different mixes of “Girlfriend” (the latter having a vaguely Carribean feel). In the more mediocre department are tracks like “Mr. Brown Stone,” which is a drumbeat and not much else. “Mickey’s Girl” is a little too white trash blues for my taste, “Making Love” becomes a victim of its own joke by having no headnod factor, and “Party in My Pants” sounds like it should have been left in the 1980’s.

If you judge both by the entirety of this album and by Adam B’s interview, there’s more to Mickey Avalon than meets the eye or than seemed possible five years ago. There’s definitely an intelligent spark behind these raps, but a flow that sounds like a stoned Asher Roth may for some listeners be a turn-off. Others will attribute that sound to his gimmick, which is to live the title of his album as much as possible, and I’ll give him credit for taking that theme and running with it. Do I give him credit as being a great rapper? There I must draw the line. I’ll credit him as an interesting rapper, which is far more than we ever said about him before. If the clock hasn’t run out on his 15 minutes, I’d like to see what he has in store next. If it’s more mental (and otherwise) masturbation I may not be interested – then again there’s nothing truly offensive about “Loaded.” Even if he’s saying nothing important, for the most part it qualifies as good party music.