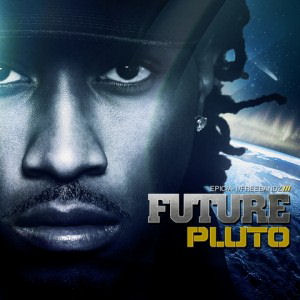 One thing can be said for certain about “Pluto” – it’s the most anticipated album coming out on April 17th, 2012. It’s conceivable that it’s the most anticipated hip-hop album for the whole month of April. And given that the release date was postponed for several months, I’ll even concede that “Pluto” is among the most anticipated records of the year so far. Future is definitely that guy right now when it comes to crossing over from the underground to the mainstream. The Decatur rapper and Dungeon Family affiliate has found that right mix of what’s in right now for his hit songs, like the K.E. On the Track produced “Magic,” which only got bigger when T.I. appeared on the remix. That version is on this new CD.

T.I.: “Tell you off the top, I’m bossed up
Yee ain’t talkin money, don’t talk us
I’m steady stackin that guap up
Ball harder than you when I’m locked up
You the type a nigga just popped up
when nigga rollin that kush, huh?
Got mine growin like grapevines
in the backyward, come look, brah
I pull up, hop out
Bad hoes just pop out
Hatin niggaz better watch out
Still ridin with that glock out”

Future: “On my way to Aspen, I forgot to do my taxes
Call on my accountant, he gon’ make it do magic
Had to get a driver just to drop me at the airport (For what?)
Way I smoke the blunts, man, I burn ’em up like Newports
Fif’ thou in Auto Zone, superstar attire
K.E. and Young Future bringin ’em fire
All this damn cash make a bitch wanna retire (Turn it up)
Gotta drop a half a brick, you wanna put me on the flyer (Future)
Excuse me but my name go crazy, see these diamonds, ain’t none of ’em fugazi
Two bad bitches wanna fuck me the greatest, a O.G. and a brand new Mercedes
Turned out a lot, I’ma do a 180, for the haters I’ma gon’ ‘head and do a 360
Trickin on the Sprite, got lean all in it
I’m an astronaut nigga, better church my pimpin”

So what’s the secret to Future’s success? It can in large part be attributed to his flow, which I will divide like a pie into four slices. 25% is his sing-song delivery, which falls somewhere between monotonous and hypnotizing. 25% is the use of AutoTune to manipulate his vocals, turning him into a cross between T-Pain and Gucci Mane. 25% is the fact he’s very well connected in the game. He’s got Drake on the Will-A-Fool produced “Tony Montana,” Snoop Dogg on the Jon Boi produced “Homicide” and Juicy J on the DJ Spinz produced “I’m Trippin'” and R. Kelly on the DJ Pharris & John Blu produced “Parachute” just to name a few. The other 25% is in fact production – Future has all the right beats. Will-A-Fool’s production on songs like “Astronaut Chick” sounds grandoise and epic. Mike Will is the ideal slow ride on instrumentals for “Truth Gonna Hurt You” and “Neva End.” One of the album’s best is the C-N.O.T.E. laced “Long Live the Pimp” featuring Trae. These beats will knock in your car, guaranteed.

In the grand scheme I can respect Future’s hustle greatly. He’s well connected, he’s well promoted, he’s making the kind of music that’s hot right now, and this album is undoubtedly going to push all kinds of units at retail. I’m certainly not being your stereotypical “hater” when I say a lot of the time this album doesn’t work for me. The lyrics are so-so, but would probably be better if he could enunciate and articulate what he’s saying with more clarity. The singing and AutoTuning don’t help matters on that score – they exacerbate the inherent problems he has. Good beats can take you a long way, but having something to say can too. Much like another album I reviewed today, Future’s whole point seems to be partying and living lavishly, only I don’t sense any possibility that he’s anything other than 100% sincere about it. It seems this is his whole life. “Permanent Scar” could have been a metaphor, but instead it’s a statement that he’s something you’ll never forget. That’s irony. He’s well-produced, well-connected, and well-forgettable. He sounds like everybody else on Shade 45 in 2012, so it’s going to work, but it’s only going to leave the faintest impression on me.