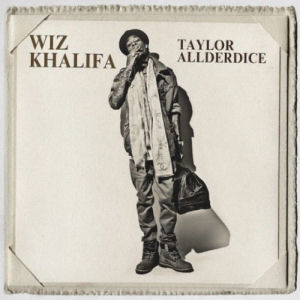 This mixtape is all about being unapologetic. There’s no justification for the lack of width in the content (smoking weed, being rich as fuck, hanging out with hella hoes), the heavy hands on the drum machine, and the interludes where Wiz speaks braggadocio in a blunted voice. If “Taylor Allderdice” represents the next step in Wiz Khalifa’s development as an artist, it’s a solidification of his status as an unrepentant successful man-child of the 21st Century. Wiz Khalifa represents how most dudes of our generation would act if they made it. Who wouldn’t want to smoke inordinate amounts of weed, show off all the new cars and clothes, and kick it with other established celebrities like Juicy J or Rick Ross? Shit, I would.

“Taylor Allderdice” is almost “Grindhouse”-esque in how over-the-top it is, and like “Grindhouse”, it’s entertaining if you don’t put any elevated expectations on it. This mixtape is half-kickback in your homie’s apartment and half-night out in Vegas while dropping $30K, and a complete expression of the artist Wiz Khalifa wants to be known as. If Drake is the flagship artist for pimpin’ with a sensitive side, and J. Cole is a symbol for young ambition mixed with girl problems, then Wiz Khalifa builds his throne as a ganja addict who loves to brag about his good life.

The highlight of this mixtape is the production; hell, I dare say Wiz can win plaudits with his ability to pick beats alone. All the producers bring fire with them, attaching weighty drum tracks to scaffold anything from the jazzy pianos of “Mia Wallace”, the techno-organic synth and guitar combo of “The Grinder”, and the big band sounds of “Number 16.”

But the best beat on this mixtape belongs to “Never Been Part II” featuring Rick Ross and Wiz’s fiancÃ©e Amber Rose, with a prodigiously simple cut-and-paste job done by Sledgren. The beat is lifted straight from the classic 16-bit RPG “Chrono Trigger” and attached with some stomping bass drums and backhanding clap snares. I’m going to go out on a limb and declare this the best video game sample done in any hip-hop song ever. It almost seems like the beat was made for a contemplative rapper about to drop philosophical bombs, but Wiz does the beat right with some simple good-life lyrics.

“I stay on my job so you can see I’m up next
Dawg I be going so hard, some say I’m needing some rest
Got so much smoke in my lungs, it ain’t supposed to be on my chest
And niggas talk but don’t even be on them jets
Man they don’t even seeing them checks
But you can tell, by how I, spit it, nigga, I be, gettin’ dough
Take her, all the, places, that she, never been, befo'”

There’s a lot of Juicy J influence in this mixtape too, which fits with the feel of the mixtape given the years of drug laden party lifestyle spit by Juicy J and Three-6. Juicy J was never known for lyrical complexity or depth of content, but then again Wiz never attempts to break barriers in this mixtape either. Take “T.A.P.” for instance, produced by the aptly named Spaceghostpurp. The song is a low-tempo methodical declaration about weed smoke, shining jewelry, a bunch of hoes, and the party life. Both Juicy J and Wiz are deliberate in their delivery, they spit in the same mode as street rappers describing how they’re about to roll on an enemy, but the verses detail how stubborn both artists are in their desire to have as much expensive fun as possible.

Wiz: “Nothin but gin in my trippy cup, pouring more, I can’t get enough
Young Khalifa on that hippie stuff, I break it down and it lifts me up
So much shining, so much diamonds, all that there comes from so much grindin
So much weed up in my lungs, I’m in the air, I’m somewhere flyin
In your town I cop me a pound, show me one and I’ll roll one
All my niggas straight drug addicts cause it takes one for you to know one
Bake somethin and never hold none, young niggas with some old lungs
Catch me out at your college campus, weed rolled with a cold one”

Juicy J: “Got from my bitch and she get from her mama
Talking like this, I be walking like this
Sold a few hoes and I bought a new bitch
Taylor Gang niggas the number one chieffas
Smokin’ on gas prolly louder than speakers
Mix with the hash, dip in the lean blue dream, I’m a fucking fiend
Standing on Fairfax getting smoked out with them niggas from Supreme
Trippy sticks, bong rips, blunt dip, I’m down to do whatever
She wanna pop a molly man, Juicy J gon’ fuckin let her”

Some other highlights of the mixtape include electric guitar-infused high-speed jam “The Code” with Juicy J, Lola Monroe, and Chevy Woods, the loungy kickback raps and music on “Nameless” with Chevy Woods, and the concluding track “Blindfolds” with Juicy J. While the lyrics might ring hollow to some, Wiz Khalifa is has enough demonstrated talent to sound smooth on any beat, he’s clever enough to make the simple subject matter jump out with well-timed lines, and he does a damn good job of picking production for the mixtape. “Taylor Allderdice” is simply a good time, and when you think of it like that, you can’t help but have fun with it yourself.