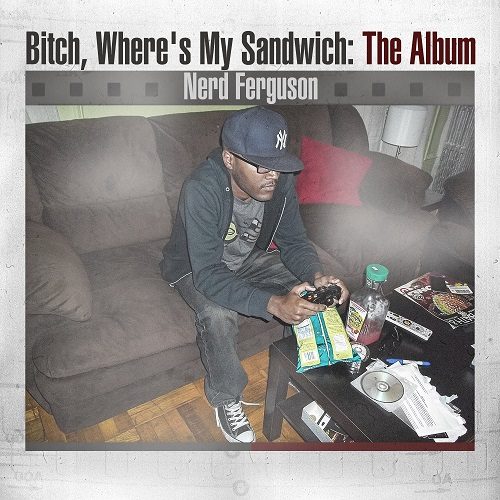 I can’t help but crack a smile listening to the opening of “Warning: Don’t Sign Me,” and it’s not because of the self-effacing song title. The joy I feel is from the extended instrumental sampling of Bob James’ “Nautilus,” one of the best breaks of all time, used liberally in hip-hop classics ranging from Eric B. & Rakim’s “Let the Rhythm Hit ‘Em” to Ghostface Killah’s “Daytona 500.” (It gets a little overshadowed by Commodores and Pleasure samples in the former, but you can still hear it clear as bell on every wordless chorus.) Nerd Ferg may be a young cat, but he’s got an old soul.

“Uhh! Here we go again
Mr. Nerd Ferguson, everywhere I go I win
And even if I lose, I’m a winner in the end
Like even if a chick says no, I’m in her in the end
Yeah! Niggaz can pretend all they want and all they wish
that I ain’t what I is, which is the illest in this bitch
Give you agony of +da feet+, Curt Schilling in this bitch
Get a load of me, it’s just Curt chillin in this bitch”

He’s definitely got an old school flair for braggadocio on the song too, and there’s another reason to smile – he IS a comedian on the bars. He manages to mock both Rick Ross (“I’m not a star? Somebody lied”) and pop music (“Remember me like Teairra Mari or Ciara’s career”) and call out fellow rappers from his city (“And that wasn’t subliminal, but just in case you thought it was/Papoose chill with all that shit you talkin cuz”) without fear. He spits over-the-top absurd notions about wasting advance money from any label that’s crazy enough to give him a deal, and then says “Who knew a nerd could be so grimy?” I like this kid.

Even though Nerd Ferguson opens “Bitch, Where’s My Sandwich: The Album” with the warning this is NOT a mixtape, one could be understandably confused given my copy of the CD came in the prototypical slim-line case, and if you buy it as a digital download you only have to invest 99 cents to get it (though you can pay more), and by the 2:53 mark of “We Coulda Had It All” you’ll hear the repeated staccato of an air horn blast familiar on so MANY mixtape releases, sans a deejay shouting his name or his peers over and over again. (If you have no idea what I’m talking about listen to Shade 45 XM any night of the week and you’ll get the idea pretty quick.) It’s also possible many of the samples on this CD would never get cleared if done at a larger than independent retail level, but songs like “Doing Lines With Oprah” are so comical that I really don’t give a shit.

“She my baby and I love her to death (uh)
I’ma love her ’til nuttin is left (uh)
If she want then I’m spendin the loot
Anything to make sure she don’t give me the boot (uh)
She tell me ‘Jump’ I just ask for the height
Jump off of a bridge; sheeit, if she asked me I might (uh)
Niggaz sayin ‘Nerd you crazy as fuck’
But you don’t hear me though, yo, I’m just crazy in love
‘How crazy?’ Crazy like a sleepover
but nobody’s sleeping cause we too smoked up
Sippin so many cups of rum & cokes up
that we too drunk to remember what we smoked up
The-the-then the cops came and the party got woke up
Fights broke out and some jokers got yoked up
and TMZ came and some pictures got post up
of DMX and Kat Stacks doin lines with Oprah (that’s crazy!)”

Despite having a name which might make you think he rolls with either Pharrell on some skateboard shit or MC Lars on some Herman Melville shit, Nerd Ferguson is a comfortably middle of the hip-hop pack rapper who likes to talk about drinking, smoking and having sex, but injects his own sense of wit into it to separate himself from said pack. You should get the pun behind “Kim’s Car Dash (She In)” but if you don’t then you probably don’t know who Khloe or Kourtney are either (and I see you hitting Google furiously). He loves double entendre too, as evidenced by songs like “Lesbi-Honest” featuring DeFakto. He’s also not afraid to visit “Cougar Town” even though he admits “I’m with a chick old enough to be my mom.” There’s a lot to ingest on “Where’s My Sandwich” with over an hour of material, which means not every slice is deli, but for the most part I think labels WOULD be interested in signing him – that is if he didn’t promise to spend the money on sneakers and Hummers and disappear for the summer.