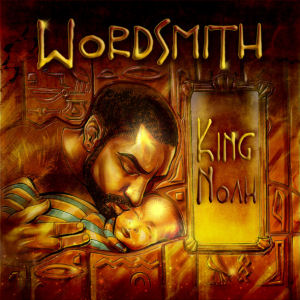 This album is literally a dedication to Wordsmith’s recently born son Kingston Noah, with an intro before the title track explaining that numerological coincidences abounded when he was brought forth on the Earth. Even without those coincidences, any father will tell you that bringing a son or daughter into the world is a life changing event, putting all of your priorities into a totally different focus. It hasn’t changed Wordsmith’s focus on being a musician though – it just enhanced it. Wordsmith is already an unconventional emcee who purposefully decided to ignore modern day trends, “Bridging the Gap” to days gone by to record an album with hip-hop legend Chubb Rock. There’s nothing nihilistic or excessively indulgent about Wordsmith – he’s all about the “Essence of Life”:

“Walkin a path that only I see
Knowin that my spirit is free, forget a fantasy
As real as it gets
It never seemed like a movie script, flip the bad flake
on a constant race without a true goal
Only if you’re sellin your soul to get the short road
Really think – what you livin for?
You got a life that you should explore, there’s so much more”

Wordsmith’s mission is not just to elevate hip-hop for himself and his son, but to connect with like-minded artists so they can ALL lead the movement. “This is a revolution in music right now – all that garbage that’s out there is about to be abolished” quips Wordsmith on “Generation X,” before turning the mic over to peers Substantial, K. Sparks, CuzOH! Black and J The S. Other quality collaborations are not hard to find – Gods’illa and Junclassic are on the “Rhymesayer Revival Remix,” Kontact joins CuzOH! Black for “Globetrotters” and “Voice of the World,” and Phil Ade and Steven Drakes have an “Eye for the Spotlight” among other collaborations. All of the features are independent, underground, hard working artists who deserve more of said spotlight – we’re not looking at limos and bottle popping here. This isn’t music for flossing – it’s “Music for the Masses”:

“Life is a hurry at times, it’s hella blurry
You clean but lookin dirty, you good but never worthy
Now here the reason that Devil is a joker
Play you like it’s poker, the illest roller coaster
full of ups and downs, never no sequence
So I got these words for y’all called the treatments”

I would be remiss if I didn’t mention at least once in this album review that Wordsmith is a spiritual man, and by spiritual I mean Christian. He doesn’t beat you over the head with Bible chapter and verse in each song, but he does mention God and prayer more than you’ll typically hear on a rap album. In one of the many messages recorded for his son before each track, he explains that he’s been two different men in his life as an emcee, and grew away from the negativity and misogyny of his early career to someone his son can be proud of growing up.

There’s no doubt that the namesake of “King Noah” will be proud of his pops growing up, but he may also be slightly embarrassed that each song has his father personally speaking to him. It’s difficult to criticize this facet of the album, because I appreciate the heartfelt sentiment shown here, and as Edo.G said so many years ago we need more men to be a father to their child. On the other hand, it would have been so much nicer if the messages had been separated out into individual tracks/skits instead of taking the first minute or two of each song, so that once you had heard them the first time you could easily skip over them to get back to the music. There’s not much else I can say negative about Wordsmith though, and that’s because he manages to stay positive without being cornball or spitting overly simplistic rhymes. When you need a break from bling and bitches for a while, give “King Noah” a try.