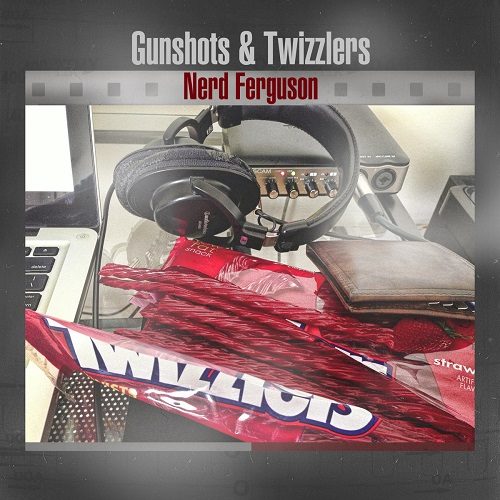 Nerd Ferguson’s “Bitch, Where’s My Sandwich: The Album” was a pleasant surprise last year. “Gunshots & Twizzlers” is the follow-up album and as both the artist and album name suggest, it’s a precise balance between intelligence and thuggery. He wastes no time jumping right into the thick of things on the self-produced “How Many Mics.” There are no pretentious skits or interludes to keep you waiting, and no questions that he’s cocky about his skills:

“Booyaka! You niggaz hit the stage and they boo your shit
Your girl sendin texts sayin she love me I’m like ‘Who is this?’
No time for foolishness; ride for the kids
who got picked on by the cooler kids – holla if you fool with this”

As with his last album he’s offering this digital release with the “name your own price” option starting at 99 cents, and in my humble opinion if you only pay a dollar you do everybody involved a disservice. This is a professional and polished album in every way other than coming to you shrinkwrapped for sale at retail brick and mortar stores. Nerd splits the production duties with Lee Treble, and he deserves his fair share of both the credit and the price the consumer pays for it. He showcases a pleasant variety of styles – an uptempo minimalism and slick chorus on “Breaking Bad,” a super over-the-top South Florida sound parody on “Hyundai Elantra Music,” and some slinky sex funk for “I Miss My Jumpoff.”

I’d be lying if I said I recognized any of the guests on Nerd Ferg’s album other than Defakto, and that’s only because he was on the last album. That’s alright though because Ferg is a near 50% average of completely solo songs, which doesn’t sound that high at first, until you remember a .300 batting average makes you a star and that’s LESS than half. Even on the songs he shares Nerd Ferguson is clearly the man, and the ones he holds down on his own like “Dark” (produced by Justyn Waves) have just as much swagger as a man signed to a major label.

“Doin my God damn thing, dog; and niggaz sit around
knowin God damn well that they can’t do a God damn thing, dog
E’rybody talk about NY rap
Waitin on a nigga that’ll bring NY back
Say there! Want a savior? Play my shit
Everything that you fuckin need’s in my raps!”

The funny thing is that even though Nerd Ferguson has a self-effacing name, he’s actually not that nerdy. Sure he’ll drop a “Game of Thrones” reference here and there, but that’s so pop culture at this point thanks to HBO one can hardly call it nerdy. Neither is playing video games when everybody has a console and a copy of Call of Duty or Gears of War, but don’t spend a lot of time looking for gamer raps here. You’d be better off calling on MC Frontalot or Richie Branson if you want something that’s #Nerdcore because that’s not what Nerd Ferg is for. He’s more like that dude you know who acts like he’s shy and not so cool that it turns out is a real pimp with the ladies.