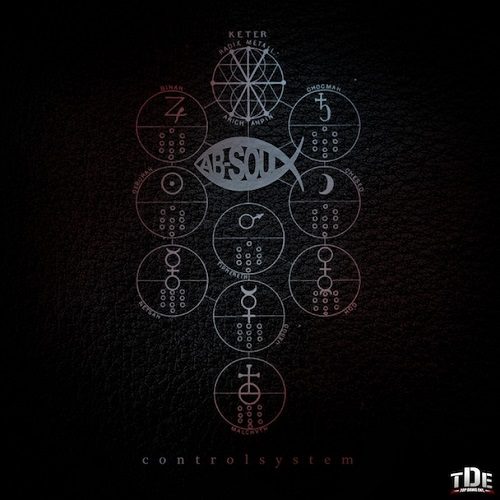 “I guess the Mayans wasn’t lying
2012 my world ended
You used to say that I could see the future
You was wrong, cuz you was in it
And I was just with you the day before
You said you loved me, I said I loved you more
And as much I wanna cower and bid the mic adieu
And fall off a fucking tower tryna find you
I gotta stay cuz I remember that day
I looked you in the face and told you nothing can stop me
Not even you”

Ab-Soul has had quite a year. The previous rhyme is an excerpt from “The Book of Soul,” which was dedicated to his long time girlfriend Alori Joh, whom committed suicide back in February. In March, he and his Black Hippy crew (which consists of Soul, Jay Rock, Schoolboy Q, and Kendrick Lamar) signed a deal with Aftermath/Interscope. And in May, Ab-Soul released his second independent album through Top Dawg Entertainment, “Control System.”

Ab-Soul is definitely the most unique emcee out of the Californian quartet, as his style is very lyrical and introspective. “Control System” has a very dark feel, thanks to in-house production provided by various members of the Digi+Phonics production crew. The Danny Brown assisted, “Terrorist Threats” is a very paranoid track where the two up-and-coming lyricists trade verses speaking on government conspiracy theories: “I seen images of Hitler in the picture when the Twin Towers dropped.” Another one of the album’s many gems is “Double Standards,” in which Ab-Soul raps about the double standard of male/female relationships:

“She with the girls, she with the girls
Hair done, nails done, no care in the world
She with the girls, she with the girls
They all wifey material, yes sir
She want a boyfriend, she been missing out
On love making and making out
But she ain’t having the best luck
Everybody who chop it up only want a cut
One of her girlfriends got one
She been jealous of the relationship since day one
But last week he made a pass at her
She knew she had him, her ass a little fatter
Unbutton his jeans and then she fell to her knees
She finally found company for her misery
He hesitated, and she say “Why you push me?
If you don’t get this pussy, then you a pussy”

“Control System” isn’t an entirely bleak affair however. There are many less serious tracks that perfectly balance out the album and show that Ab-Soul, while not as versatile as say Kendrick, is a pretty well-balanced emcee. “Bohemian Grove” is a nice smooth party track, in which he displays his intricate lyricism over a pretty lighthearted track. “Lust Demons” is another example of Ab-Soul’s versatility, as he can make a sexual song, which features Jay Rock and BJ the Chicago Kid’s best Marvin Gaye impression (and frankly he nails it), while still being able to make a song as deep and analytical as “Double Standards.” He holds his own against one of hip hop’s brightest young stars in Kendrick Lamar on “Illuminate” and the drugged out “Mixed Emotions” is equally phenomenal.

“Control System” is maybe two or three songs away from being among the best albums of 2012. The album clocks in at just over 70 minutes, and doesn’t really drag too much. But tracks like the Schoolboy featured, “SOPA” and “Showin’ Love” are pretty average tracks that keep “Control System” a notch below the year’s best albums (Killer Mike, El-P, and Nas).

While Ab-Soul’s strength is obviously his lyrical presence, on tracks like “A Rebellion” and “Empathy,” he knows when to step aside and let the amazing production take center stage. “A Rebellion” features the famous drums of Paul Simon’s “50 Ways to Leave Your Lover” and he even gives a little stab at singing along with his late girlfriend, Alori Joh, on the very soothing track. “Beautiful Death” is yet another brilliant track, which samples OutKast’s “You May Die (Into).” The track also features a excellent performance from Ashtrobot (who you may remember from Kendrick’s “Keisha’s Song (Her Pain)” as well as some of Ab-Soul’s best lyrical offerings from his young career:

“All I see is confusion and chaos
Blatant disorder, authorities pickin’ on the minorities
Unfortunately, the land of the free has little to offer me
And got me awfully thinkin’ about offin’ me
I wake up in the morning and I ask myself
Is life worth living, should I blast myself?
I’m tired of being broke and even worse
The upper class acts like they want me off this earth
(This life will drive you crazy)
Only if you allow it
That’s only if you a coward and you’re sure to get devoured
To no avail, tuck your tail, and all you do is give them power
Who’s gonna take a stand, who’s gonna be a man?
Who do you work for? Please help me understand
You could be the victor in a situation”

Yes 2012 was indeed a tragic, yet triumphant year for the West Coast wordsmith. But with Kendrick Lamar’s major label debut set to drop in October, we haven’t even begun to tap into the potential the Black Hippy crew has to offer.