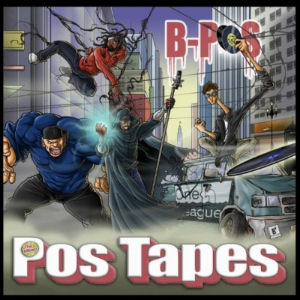 Conscious rap has played an important element of hip-hop culture since the early 1980’s. Grandmaster Flash and the Furious Five’s “The Message” was the first conscious rap single to propel the genre into the radio waves and TV screens of mainstream America. “The Message” was able to accurately depict the bleak social conditions of poverty, violence and alienation experienced by many living in the ghetto. This track fundamentally shifted rap music from the hands of deejays who dominated the scene with their scratching and blending techniques to emcees with the ability to express their own rhymes creatively and report what was occurring in their respective communities. San Francisco based rap group, B-Pos (short for Be Positive), has contributed to conscious rap independently throughout the years with the release of several mixtapes and albums. The rap collective consists of emcees D-Wiz, Goodword and Khafre along with DJ Johnny Venetti. Their latest record, “Pos Tapes- The Album,” is said to be a “best-of” compilation of their trilogy of mixtapes, “Pos Tapes Vol. 1-3,” which were released over the past two years.

As a group, B-Pos is able to carry on the tradition of golden era hip-hop at times with a decent combination of consciousness and ability to showcase their technical rhyming ability. “122112” featuring SoundEarth is a moody and atmospheric milieu where the emcees question, “What would you do if the world was gonna end?” D-Wiz and Goodword take a stand on this joint and blame the greed of mankind for corrupt governments, global warming and cancer. The mellow “I’m High” featuring Tess takes a hopeful point of view with messages promoting the value of all life, equality along with mentioning that “It’s time to open up the blinds to find a panoramic view.” The highlight track of the record is the aptly titled “Dope.” This positive boom-bap track features record scratches and a nice jazzy backdrop, while detailing the group’s idea of improving society:

Goodword: “I wanna open up your mind to skill of the raps
Try not to get your wig cracked ’cause when we’re peeling it back
I’m gonna show you why you supposed to try to keep it intact
D-Wiz: Stop preaching deacon
Goodword: I’m just speaking the facts
It would be dope to fully focus on the motivated unity
Those that will oppose it are known to break communities apart
They take away art by taking out the teachers
I be creeping through the streets bleeding teacher from the speaker”

While this compilation album does work on a traditional rap level at times, it flounders musically and conceptually quite often. “Super Hero Pool Party” is a self indulgent tune by the group and guest rappers Z-Man, Pep Love, Melina Jones, Dublin and Pheonix. Boasting about your rap skill is one thing but this track illustrates each emcee coming across as a parody of an Avengers’ character. “Daddy’s Gotta Fly” illustrates the California rappers portraying their corny superhero personas again while mentioning that they have to leave their girls to fight crime. “On Hold” featuring SoundEarth discusses the interesting subject of a couple’s rocky relationship. However, this song should have never made it past the cutting room floor as the off-beat rhyming and singing make it sound like a complete mess. “Give Us Props” is another lackluster track as it contains a generic piano and boom-bap beat where the group complains about not receiving enough recognition from fellow rappers and the media.

As a compilation record “Pos Tapes – The Album” works to a degree on a fundamental rap level with its socially conscious themes and emphasis on lyrics. Unfortunately B-Pos doesn’t feature an original sound or voice to distinguish the collective from other artists or groups. A few tracks on “Pos Tapes- The Album” should have been scrapped from the record altogether and others are in serious need of refinement. In the future, B-Pos should put more emphasis on expanding thematically and musically since this record will have trouble garnering the group a larger fan base outside of the local Bay Area community.