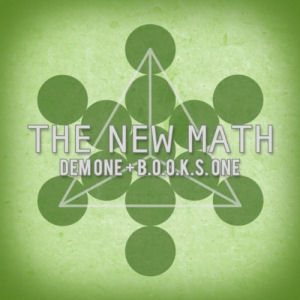 “I’m a blast from the past, I’m the forthcoming present
Not will like i.am, causeI Am Legend
Dem One, demigod, allow me to demonstrate
Demolition Man, do damage on the demo tape
Dem democratic, Dem a man of the people
But he spits like a demon, you would think that he was evil!
He’s one with the universe, he’s one tough cookie
One kid from a one to run up on your rookies”

For the past few months the rapper/producer team of Dem One and B.O.O.K.S. One have been hitting me up with promo videos and information to throw up on the RapReviews newsfeed. Now if I can “shoot” as the wrestlers say for a minute with you the reader, I get so many of these things that I often just regurgitate whatever gets sent my way without having the time to check out or appreciate the value of what I get sent. It’s the curse of being self-employed with a large website and an inbox that’s constantly flooded with people looking for attention or a review – you have to just keep shit moving before the next 100 e-mails comes in. Somewhere along the way though, I actually stopped to check out a video from The New Math though, and to my surprise they won me over right away.

Personality makes a huge difference when you’re trying to stand out from an overcrowded genre, and clearly Dem and B.O.O.K.S. had plenty. It probably didn’t hurt that I was also amused by the title of their record label – Low Self Discipline. A sense of humor also helps to make you stand out from the crowd, and as emcees go Dem One is definitely wittier than the average. He’s got more math in the book than just comedy though – he’s got a strong braggadocious style I can get down with due to his confidence on “Vapor”:

“Rhymes so dope I don’t put ’em on paper
Legend in the mind right now ’til I’m vapor
Vapor, blessed by the will of the creator
I’m damn good now and I’m only getting greater, wait up
[…] toot my own horn, conclusion foregone
Your choice either me or the morons
But y’all gon’ learn before long
I spit out chrome bars of reinforced steel, I go hard”

As an 8 song EP that’s only 22 minutes and change long, I wish I had more to say about “The New Math” than I do, because I really like the potential of what I hear here. Even the instrumental only tracks like “Red Pill/Blue Pill” are type nice, and the mellow vibes and distorted vocals of “Try” remind me of the earliest days of Illadelph hip-hop legends The Roots. It would be a gross overstatement to hail a team as classics this early in their career when I’m only just getting to know them and they don’t even have a full album out, but I’ll go out on a limb and say this could be theSTART of a classic career if they continue to build from this strong foundation.