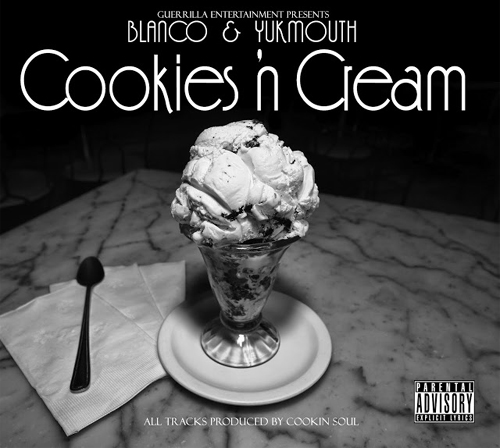 The more things change, the more they stay the same. In 1995 Yukmouth scored the biggest crossover weed anthem ever with his partner Numskull, “I Got 5 on It.” The song yielded a legendary ‘Bay Ballas Remix’ that featured a near-complete Bay Area all-star line-up. Fast forward to 2012 and Smoke-A-Lot still serenades Mary Jane, sharing the spliff once more with fellow Bay Ballas Dru Down and Richie Rich (completed by E-40 stand-in B-Legit). This time the smokefest is called “Airheads,” the first song on “Cookies ‘n Cream,” the Oakland rep’s collaboration project with Blanco and Cookin’ Soul.

Unlike Yukmouth himself the latter may need an introduction. Cookin’ Soul are a production team from Spain whose beats get picked by a variety of US rappers, from Harlem’s 40 Cal in ’07 to Hollygrove’s Fiend in ’12. Blanco is a Berkeley, CA rapper who has been putting out mixtapes since ’08, notably the Cookin’ Soul-scored “Portrait of a Serial Killer” last year. It’s certainly an interesting set-up – a rookie and a vet from the West Coast on the mic with Europeans behind the boards. The outcome, however, is fairly conventional. That’s not to say that everything is business as usual. Even in an age where the topic of smoking is more popular than ever with rappers, “Airheads” is an exceptional piece, an epic 8-minute soul suite with five inspired rappers celebrating the virtues of dank and drank. It’s evidently a wrap for Yuk (“Coughee Brotha like Devin / Veteran, you niggas get yo weed from dispensaries / I know the grower with the tree, he let me pick the weed / Boss shit, I’m right there when they clip the weed”), but with his crawling, croaky delivery Blanco gets away with claming “I’m the fuckin’ weed king” in the presence of MC’s with a long history of smoking mics and marihuana.

Elsewhere the EP’s initiator has more trouble keeping up. He’s not solely to blame for the failure that is track number 2. Titled “Warheads,” it’s supposed to set a counterpoint to “Airheads,” but Cookin’ Soul’s anemic imitation of ’90s East Coast hip-hop (complete with Nas sample) just makes it obvious that most West Coast rappers don’t last on Boot Camp Clik territory, even if they’re named Phil Da Agony or Mistah FAB. Which brings us to another problem – on only 7 tracks the guests are so numerous and dominant that Blanco & Yukmouth never emerge as co-headliners. The weededed Blanco manages to get his shit together on “Rocky Road” and “Whoppers,” but even there the spotlight naturally belongs to livelier vocalists like Yukmouth, The Jacka and Stevie Joe.

As for Cookin’ Soul, “Warheads” is the only time they really mess up. They usually hit the right notes, whether it’s with the hard-edged “Whoppers,” the crunked out “Pop Rocks” or the playful “Hot Tamales.” They continue to establish themselves as a reliable source of contemporary beats, nothing more, nothing less. So do not expect anything else than the same old from “Cookies ‘n Cream,” albeit nicely packaged and professionally produced.