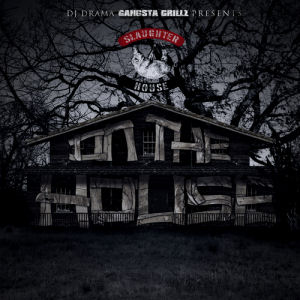 Slaughterhouse :: On the House Mixtape

With “Their 2009 debut album put the world on notice that the concept of hip-hop supergroups was not dead. Each of the individual artists involved had been a success to some degree, particularly Joe Budden and Royce Da 5’9”, but combining with Crooked I and Joell Ortiz elevated all four to a level they had never seen before. Their collaboration resulted in an informal rap game of “top this 16” in each song, and instead of causing consternation it created camraderie as the crew crafted memorably humorous raps over hella bangin’ beats. Critical acclaim soon followed.

There’s little doubt a new full length album from Slaughterhouse is heavily anticipated by hip-hop heads. The best case scenario for “On the House” then would be that all of these songs are original, previously unheard, dope material somehow not good enough for the final album.DatPiff tags each song as an EXCLUSIVE in their description, and since the song titles don’t seem to duplicate the Amazon MP3 tracklisting

we will have to take their word for it. Just to be sure though I cross-refenced leaked songs that have been transcripted and didn’t see “Hammer Dance” or “My Life” among others out of these 13 songs. So with NO repeats that begets a far more important question – why not save this material for a double disc, or use them as bonus tracks for an in-store exclusive? No one will turn down free Slaughterhouse songs, but for a group as admired and respected as they are, it’s not like selling these songs would be that hard.

Crooked I: “Ever since I started hangin with Slim Shady it’s makin the pigs hate me
They racist as Dick Cheney, scared to shake my hand
like maybe they’d get rabies, they angry the shit’s crazy
So I’m fuckin they hoes, they ladies get mixed babies
I live mainly like a role in the script
written for somebody who holdin his dick
That mean I never let a bitch play me – ay me? I’m off beat?
Stop it young buck, you not hip to the flow
fallin in awkward pockets, like the small one in your top hip
Dumb fuck!! … (Crook keep goin…)
Teach a class while the speakers blast
New niggaz out are eatin ass, bottoms up like a drinking glass”

The layered R&B samples and pounding bass of the title track suggest the typical high quality level of Slaughterhouse production, but as is the case with most internet mixtapes there’s no liner notes for who did what. Officially the mixtape is credited to DJ Drama, but to me that suggests he’s the promoter who sponsored it for DatPiff and beyond, not the man who is actually mixing this music. From this point on though the beats are far more variable than the rhymes. “See Dead People” is well mastered and has a sinister horror movie soundscape that befits the group’s bloody name. If you predicted an Eminem sample for the hook “Juggernauts” you were on the right path, but I doubt you predicted The Alan Parsons Project beat in the background. This one at least I can understand being on a free mixtape – it probably would have been much too expensive to clear for a CD.

Other standouts include “Coming Home” and “Gone” featuring K-Young (which would be even better without the GANGSTA GRIZILL shouts). None of them can lift up the average set by songs like “Weight Scale” though. It’s all beat and built off a scratch of Biggie saying “today’s agenda” but is so barebones that it’s all lyrical masturbation and could have been done as an acapella. “Ya Talkin” tried to set a somber reflective backdrop like so many of Joe Budden’s classics, but the music is undermixed and the volume level is way down compared to the other tracks to boot. When you have to constantly turn your speakers up or down from one song to the next, that’s a sign of a badly mixed album – free or not. Some people will appreciate “Where Sinners Dwell,” but the electronic beat feels repetitive to my ears and no amount of thumping bass or chainsaw samples salvage it.

There are more hits than misses overall, and even when a song like “Who I Am” blatantly jacks Jay-Z’s “Dead Presidents” I can be forgiving, because all in all it’s fun to hear lyrical maestros like Joell Ortiz and Royce Da 5’9″ flow even over mediocre beats. Thus in many ways while “On the House” can get a pass, it does have the effect of setting the bar for “Welcome To: Our House

” that much higher come next Tuesday. We’ll see if it holds up to their 2009 debut.