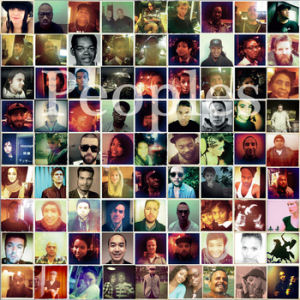 Chin Injeti is a man of many hats – he’s an A&R for Universal Music Canada, he played bass and guitar on Eminem’s “Recovery,” he’s a founding member of Juno award winning R&B group Bass Is Base and has produced everything from hard rock to country. Apparently there’s nothing Injeti can’t do, so why not add a hip-hop mixtape to that resume?

The line-up of Injeti’s “Peoples Mixtape” is decidedly eclectic, although it’s not a surprise that Wandering Worx affiliates like Jasiri X and Sonreal are featured contributors. Still the real feature here is Injeti’s deft touch behind the boards, bringing a variety of different sounds to a hodgepodge of artists and musicians. He crafts the music to meet their needs, such as providing over-the-top organs and clapping drums for David Banner on “Peoples 2.” Banner clearly relishes the beat because he jokes around and has fun, rapping “I love big butts like Sir Mix-A-Lot” and “I stay gettin paid like walkin in AIG with a hand grenade.”

Then there’s Omar Khan, a very quiet and soft-spoken AutoTuned singer, who Injeti carefully works around so as to not drown out his vocals on “What Am I Gonna Do Now?” Khan doesn’t strike me as being that exceptional of a talent – in fact he’s mediocre at best – but Injeti manages to work with what little he’s given and make the song interesting. That’s a tremendous feat. He doesn’t need that kind of help for The New Royales though, who would have been a compelling female croon even without Talib Kweli’s cameo or the slinky and seductive beat he provides for “Walking Around My Dreams.”

Injeti’s “Peoples Mixtape” has two things going for it – one is that it’s free and the other is that Injeti is that rare breed of producer who doesn’t just make dope beats and sell them to the highest bidder. He clearly believes in customizing his presentation to the needs of the artist, and that attention to detail makes him someone to pay attention to. He’s already been part of Juno and Grammy award winning albums, so who knows what’s next for Injeti?