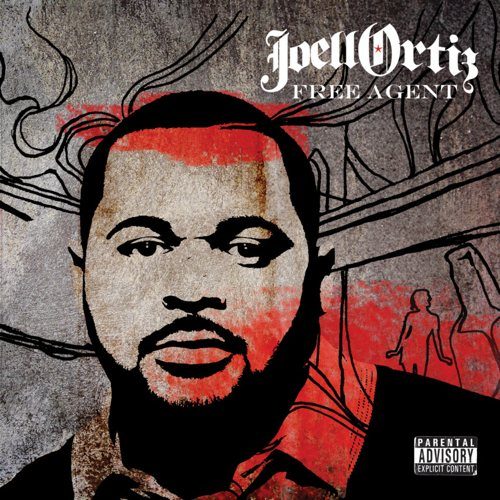 “Pro, go wild on my bass
These motherfuckers gotta know
I’m crack cocaine in the 80’s, I got a flow
I rap so crazy, you play with me – adios
Homey, I’m the second coming
This ain’t the first time I’ve been on a record buggin
Sho’ nuff won’t be the last, I’m just gettin started
You hollow, no furniture in a big apartment
I ain’t a rap nigga, I’m a nigga that rap
And I can scrap nigga, don’t get your ligaments cracked”

There’s something EXTRA about Joell Ortiz rapping over a Large Professor beat – it’s the musically hard hitting equivalent of a a brick to the face. “Oh!” from “Free Agent” is a game changer. Ortiz sounds like a fat man who hasn’t had anything to eat in days – hungry and pissed off about it. The lines are snarled with a vicious aggressiveness: “Say my name and I’ma put you in your place/no not a song – I’ma come see you and punch you in your face!” This is Joell Ortiz 2.0.

“Free Agent” is a one-two combo that leaves your head woozy, blood leaking out your nostrils, asking your friends if they got the license plate number of that truck. It’s been true since day one for the Brooklynite Ortiz that he’s critically acclaimed, and he’s well regarded as a member of the Slaughterhouse clique, but he didn’t necessarily get that rep as the rapper who would body you. Well if anybody was doubting Ortiz, this album is one hell of a late pass. Just listen to him boxing beats on Kenny Dope’s “Finish What You Start”:

“If I’m in there, the whole place full up
I’ll use your lil’ bars to do a pull-up
Use your whack-ass tracks as target practice
and tell the baddest broads to arch you backwards
For years I wore the same Starter jacket
and beat up tees with the scars to match it
Jeans with the holes, sneakers with no sole
When Genesis dropped, my Nintendo was so old
Oh no, couldn’t have that
I put the pen where the pad at – VOILA! Magic
I disappear in the booth, reappear Messiah
When I write, call it a night, vampire”

As hard as Joell Ortiz is bringing it on “Free Agent,” there is a more sensitive side to this serious spitter, which you can hear on the early leaked single “Call Me (She Said)” featuring (and produced by) Novel.

“She had that perfume with the only smell
Hair scrungied up in a pony tail
Gold hoop earrings with her name of ’em
I had the colliseum fronts with the fangs on ’em
OOOOH!!!! Thinnest waist with the fat ass
Had me all happy to go to math class
Yeah! I had to go for it baby
Sent the letter over circle yes, no or maybe
UH!!!! And she looked back with a cool blush
Showin me the results of a nice toothbrush
Yeah! We rode home on the same school bus
Confident consistant I’m crushin these new Pumas
Yeah! and she told me she from the southside
Told her I’m from Cooper she looked at me with her mouth wide
Like, I got fam out there
I gave her the number now you got a fan out there”

For the most part though this album is pure fire, even on songs you might mistake for crossover joints just by their nomenclature. If you thought Ortiz was extra nice spitting to beats from Large Pro, just wait until you hear his flow on DJ Premier’s “Sing Like Bilal.”

“New York, if you feelin like me then you tired
of listenin to liars, wishin it was fire
But none of them is hot not the flicker of a lighter
I’m about to blow up in they face Richard Pryor
Your industry buzz ain’t valid on the streets loser
We don’t care about them mags and them weak rumors
Your secret wack parties with free hookah
Ev’rybody walkin ’round tryin to be cooler
Nah! See I be where they keep rugers
You ain’t got to be in beefs the police shoot ya
The ox will give ya a ill buck fifty
New rappers is cool but we still bump Biggie”

“Free Agent” is the sound of a hard hitting hispanic causing panic with his non-stop lyrical onslaught. This isn’t a man who has time to rest on his laurels and enjoy being the best rapper nobody remembers by name, this is a man who is gonna DAMN SURE make you remember who he is the next time he drops 16 on someone’s shit. Even when he gets smooth he’s still hard – “Checkin For You” with Frank Dukes beats and Sebastian Rios cameo is like a shot of Maker’s Mark – some smoothness that will fuck you up. “Cocaine” on the other hand is the unapologetic DJ Khalil white powder in your face – it’s lethal and you’ll get high on it instantly. No matter where you turn this “Free Agent” is determined to show you he’s top dollar on any roster – they’ll have to shell out Carmelo Anthony money to sign him.