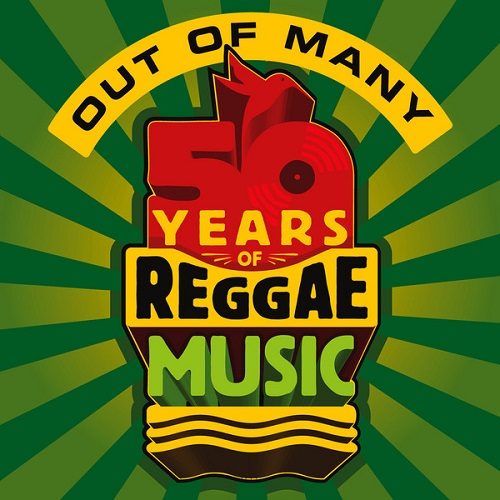 Various Artists :: Out of Many: 50 Years of Reggae Music

Reggae has been synonymous with Jamaica almost since the island nation gained its independence in 1962. This box set shows the evolution of Jamaica’s music over the past five decades, from ska to reggae to roots to dancehall.

The set is arranged into three discs, all arranged chronologically. The first disc begins with the bouncy “Independent Jamaica” by Lord Creator. It shows a nation full of youthful enthusiasm and optimism for the future. The optimism continues into the ska-infused sixties, represented here by the Skatalites effusive “Malcom X.” Hopeton Lewis’ “Take It Easy” shows the transition from hyper ska to smoother rocksteady. Some of the most soulful singers of the rocksteady and early reggae era are represented here, including Nicky Thomas, Alton Ellis, and Dennis Brown.

As the sixties grew to a close, Jamaicans came to realize that the new government brought almost as many problems as the old. There was still widespread poverty and corruption, and more and more Jamaicans turned to Rastafarianism to guide them. The music turned more spiritual as well, culminating in skanking roots reggae.Junior Byles’ “Not Fade Away” and Culture’s fiery “Two Sevens Clash” are both prime example of roots reggae at its dreadest.

Disc two sees reggae’s transition to dancehall. Wayne Smith’s “Under Me Sleng Teng” is the song that changed everything. The riddim was recorded not by a group of skilled musicians, but by using a pre-set of Eddie Cochran’s “Something Else” on a crappy Casio keyboard. Producer King Jammy tinkered with that beat a little to give it the reggae one-drop lilt, added some sung/spoken lyrics about, and voila, smash hit! Cue hundreds of session musicians lining up for unemployment, and a million kids with keyboards trying their hand at being the next reggae superstar. It’s not unlike what happened a few years earlier in New York when Roland 808’s replaced Motown’s house band as the sound of Black America. There is something a little sad about hearing the masterful musicianship of the 70s be thrown aside for the tinny amateurness of the dancehall era. No more heavy bass, no more gorgeous singing. Instead there are digital beats and young men chatting about getting high, getting laid, and taking out rivals. And yet it’s hard not to love a song like Eek-A-Mouse’s “Wa-Do-Dem,” despite the fact that he has a bizarre voice and the beat is very simple. Other artist who make a convincing case for dancehall on the comp include Yellowman, Ranking Dread, and Tippa Irie.

As the 80s wore on the rhymes got rougher, in much the same way that gangsta rap overtook hip-hop in the U.S. The correlations is clearest on “Who Am I” by Beenie Man, which starts off disc three. If it sounds familiar, it’s because it was sampled and referenced in several hip-hop tracks including Redman’s “I’ll Bee Dat!” “Seem Seema/Who’s got the keys to my beema?” is a far cry from the love songs and protest songs of earlier decades. To balance out all the roughness and testosterone, disc three also contains songs by Beres Hammond, I Wayne, Gyptian, and Etana, all of whom prove that lovers rock and roots reggae didn’t die out in the 70s.

While this compilation gives a nice overview of Jamaican music, it is far from complete. There is only one dub track, and Lee Perry, Big Youth, I-Roy, Sugar Minott, Junior Murvin, Horace Andy, Desmond Dekker, and Toots and the Maytals are all missing. The most notable absence is Bob Marley, the patron saint of reggae. That’s a little like an overview of sixties British rock not having any music by the Beatles or the Rolling Stones. Then again, the absence of Marley allows more space for other, less well-known artists. And really, who doesn’t already have “No Woman, No Cry” in some form or other?

Those looking to dig deep into reggae’s history might find “Out of Many” too cursory for their liking. However, given the bargain price and number of great songs, this compilation is definitely worth picking up. It shows that as much as Jamaica has changed in the past 50 years, it has always produced great music.