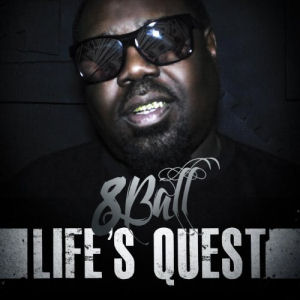 8Ball’s a regional hero and an underground legend, a veteran of two decades and a Southern innovator responsible for putting Memphis on the hip hop map. After three albums on Suave House Records in the mid-1990s, Ball and his partner-in-rhyme MJG elected to try their hand on the solo tip, and 8Ball’s 1998 solo debut “Lost,” a double-disc blockbuster on Suave House, became something of a cult classic. As a solo artist, though, he’s never quite been in the right place at the right time. Amid the southern rap explosion at the turn of the century, the follow-up was the too-ironically titled “Almost Famous” in 2001, a major label effort that poised the Fat Mac for his solo breakthrough, with guests from Diddy, Ludacris, and Carl Thomas. Sales were slow, and before long distributor JCOR closed up shop, dooming the album to premature out-of-print scarcity. Although he and MJG continued to record successfully as a duo, including two albums with Bad Boy and one on T.I.’s Grand Hustle imprint as well as a crossover smash with their contribution to fellow M-Town vets Three 6 Mafia’s hit “Stay Fly” in 2005, his solo catalog has been hampered by a few unauthorized releases and others that straddled the line between mixtape and album a little too closely. Make no mistake, though, that “Life’s Quest” is a full-blown affair, a true return to the solo realm for the River City don.

Countless seasoned emcees have gone the independent route in the aftermath of their commercial heydays, and in addition to being plagued by suspect production and low budgets, it’s easy for many to go on autopilot, especially as the need for a check eclipses the incentive to preserve one’s legacy. Fortunately, this is far from the case on “Life’s Quest,” a well-conceived outing from start to finish. Production is consistently slick, including tracks from the appropriately in-demand Big K.R.I.T. and hometown hero Drumma Boy, and while there’s a deal more autotune than this reviewer would prefer, it’s stylish and contemporary without sounding forced. Frequent hooks from an array of R&B crooners and songstresses enhance the epic, dramatic feel of many tracks, such as opener “Indestructible,” a piano-laced “Dead Presidents” soundalike with Keelyn Ellis. Ball’s gruff, syrupy vocals simmer over the twinkling music, pledging resilience in the face of temptation:

“God talk to me, I’ll just listen and try to live
Hold tight when the world try to loosen my grip
Money call me, I run to it, easy to earn
Run through it ‘fore I know it, ’cause it’s easy to burn
Dream about dead friends that I laid to rest
Still wake up every day and say I’m made for this
Battleground, everybody want a dollar to spend
The world cold when you ain’t got a dollar to spend
Got fam lookin’ to me just to fill their plates
Young’ns lookin’ up to me ’cause I’m one of the greats
Tryin’ to make it to today I made a hundred mistakes
Sometimes forget to thank God when I wake
Made peace with the fact that I might die in the streets
Pray that this premonition never come to be
‘Cause it’s real, harder than bricks like steel
Like diamonds, I’m indestructible”

The heavy, heartfelt quality of Ball’s lyrics is by no means exclusive to the leadoff track, but he’s wise to vary the tempo. “This That” has a thumping bassline, pulsating drums, and bright horns and keyboards, and it’s followed by K.R.I.T.’s production “We Buy Gold,” which also features a verse from old compadre MJG. The track shines as a premium example of Krizzle’s now-standard production style, a sparkling gem rooted in old soul. Drumma Boy’s “Don’t Bring Me Down” with 2 Chainz is also a resounding success, cleverly reminiscent of a classic Ball & G track despite Drumma’s signature blueprint.

The second half is far more contemplative, beginning with “The Price” featuring Ebony Love, an analysis of risks and chances taken in street life, and the Angie Stone-aided title track. Slim of 112 appears on the closer “Good Days,” on which Ball takes the time to pay respects to lost loved ones. As far as missteps, “Good Girl Bad Girl” was an unfortunate choice for a single, an abrasive stab at a club banger, and the derivative “GoThatAWay” also qualifies as skip material.

The standout is “Lucky’s Theme Song,” which Ball says is inspired by the experiences of an uncle. Over a deliciously anxious track, he spins a thrilling yarn of a home invasion:

“I told myself I wasn’t go’n die tonight
Even though that’s what the shit was lookin’ like
This nigga that I’m doin’ business with
He got a short pack and now he think I’m with this shit
That’s why these niggas runnin’ through my crib
I guess I’m witnessin’ you really get it how you live
Damn, now they lookin’ for my car keys
Now I’m feelin’ like I can’t breathe
They put the loot inside my girl’s car
That’s when the bullshit got started
Man, this fuckin’ shit we live ain’t got no rules
As I heard my girl screamin’ from the bedroom”

8Ball is a compelling character as the elder statesman, delivering wisdom acquired through experience rather than simply rehashing the familiar space-age pimpery of decades past. A mature performance over sleek, fresh production makes “Life’s Quest” a pleasure.