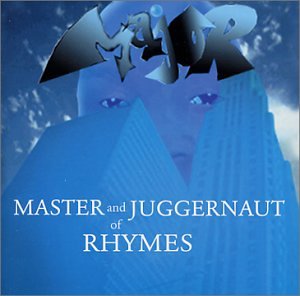 M.A.J.O.R. :: Master and Juggernaut of Rhymes

The purpose of a demotape is to display all your talents, hoping that someone will find potential in some of your skills and tell you what to build on. But nowadays people release CDs in demotape quality that probably not even their boys would want to be caught bumping. If “Master and Juggernaut of Rhymes” were a demotape, I’d tell its author to shut himself off into that zone of his own he’s speaking to us from in “Zone of My Own”, free himself from all the mental chains listening to rap music has put him in and let his imagination run wild. Then come back, tell his man Lyle ‘The Teknician’ Muse to keep his hands off that cheap music software, get some decent beats and then start all over again.

But if you roll up with what looks like a professional effort, it’s going to be judged like a professional effort, regardless if it sounds like one or not. Because what we have here is a punchline-ladden array of battle rhymes (“Don’t Fuck Wit Us”) and club joints (“Bustin’ Loose”) that’s not going anywhere. No wait, occasionally he’s going the Fabolous route (“Too Hott”), except that I’d much rather listen to Fabolous in this case. MAJOR retains a playful stance throughout his performance, but only occasionally is his forte getting proper shine.

By miles the best effort is “It’z Me” which a) relies on a solid sample and b) features the best concept and delivery. MAJOR uses the titles of movies and TV series to write this resume:

“I bring the drama, like Mr. Ripley
I’m Talented, you need a whole Platoon to come get me
I Clash with the Titans that ain’t never seen style
Eyes Wide Shut tryin’ to Walk a Green Mile
Skip the Full Metal Jacket, I’m my own Protector
Mo’ Better Blues served by the Bone Collector
I bring Heat, in this Casino we play Big
The Best Man drop lines that take digs
I’m about to Blowback
Light it up, till my eyes Meet Joe Black
Look, I’m Above the Rim and above your brain
More Eppic than Omar, For The Love Of The Game
See, The World Is Not Enough, Tomorrow Never Dies
Hush, I can’t stand Gossip and White Lies
So I’ma Do The Right Thing and Get On The Bus
Cause I’m Trapped inside this Net, so who can I Trust?”

Another conceptual joint is “Liquidda”, which combines the chorus of Quest’s “Bonita Applebum” with a metaphorical ode to alcoholic beverages. Here the producer’s uncertainty about constructing tracks resulted in a dope jam for a change: the barrage of basslines that repeatedly pause for several bars is surprising enough to take the entire track to another level. But elsewhere it’s a variety of instrumental parts that have a hard time coming together like two one-night-standers. “Generals Daughter” runs down an interesting crime story involving a chick that lets the men do the dirty work. But battle rhymes make up the majority on this album, of which “Don’t Fuck Wit Us” clearly is the most potent. “What More Can I Say” fails to recapture the energy of the Audio 2 original (“Top Billin'”). While having just enough twang to make it stand out, MAJOR’s voice often lacks the sharpness to sustain a whole track. Maybe a partner in rhyme would be advised.

But what he’s in need of the most are beats. Most cuts here suffer from awful musical backdrops. Ironically, the ones that aim to get some play at clubs are the worst. I mean when you get into detail describing how hot a girl’s dance moves are and the track you’re rapping to is just the dullest dud to ever come out of a recording session (“Doin Yo Thang”), that’s just not very credible. Another cut that has me tripping is “U Know da Name”, which takes the marriage of wack tracks and lame hooks to new heights as the drum programming drags down the precise “Rock Creek Park” guitar sample, while the chorus consists of MAJOR chanting: “Say ola, ola, ola / say M-A-J-O-R” and a rather unmotivated crowd answering his calls.

Throughout “Master and Juggernaut of Rhymes” this Chicago representative shows signs of mass appeal. An appeal that has yet to be fully unearthed, whether he wants to succeed under or above ground. The closing “I” has him proclaming that he’s a grown man and that you can’t tell him a damn thang, but – in true demotape spirit – I just had to tell him this.