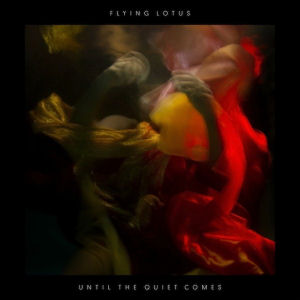 Stephen Ellison, AKA Flying Lotus has been deconstructing and embellishing instrumental hip-hop since his 2006 debut, “1983.” His 2010 album “Cosmogramma” was his most fully-realized work yet. Each track was full to the brim with ideas and sounds, and Flying Lotus was channeling avant-garde jazz more than hip-hop. For his follow up, he has taken it down a notch, moving away from the noisier moments of his earlier work and instead going in a subtler and more subdued direction.

Like “Cosmogramma,” “Until The Quiet Comes” feels more like a unified composition than a collection of songs. There are eighteen tracks here, but they all blend together to an extent. Sounds and themes repeat through the album, and some tracks glide into others. If “Cosmogramma” didn’t manage to distance Flying Lotus from being labeled a hip-hop producer, “Until The Quiet Comes” will. There’s very little here that reads hip-hop except for the occasional head-nodding beat. Flying Lotus has left the orbit of hip-hop and gone off to different dimensions.. The dubstep and house influences that showed up on “Cosmogramma” are gone. There are several guest vocalists, including Radiohead’s Thom Yorke, Erykah Badu, Laura Darlington, Thundercat, and Niki Randa. Their voices are used as instruments rather than centerpieces. They fade in and out of the music, never becoming the focal point. They aren’t backed by Flying Lotus’s production, they are part of it.

What’s left are Flying Lotus’s intricate compositions. Take “Tiny Tortures” for example: he weaves together a complex beat with a multitude of small, precise sounds to create a beautiful, haunting song. “All The Secrets” pieces together a fractured melody over handclap beats. “The Nighcrawler” mixes 80s syths with a slightly off-kilter beat. “Only If You Wanna” sounds like a jazz trio playing in space.

Like the best electronic musicians, Flying Lotus is an incredible composer. Listening to “Until The Quiet Comes,” you can hear how carefully and thoughtfully his pieces are arranged. He’s not some kid smoking blunts and playing around with Fruity Loops. He’s a musician whose work is steeped in jazz, hip-hop, the blues, and electronic music. “Until The Quiet Comes” is another excellent album by one of the most interesting producers out there.