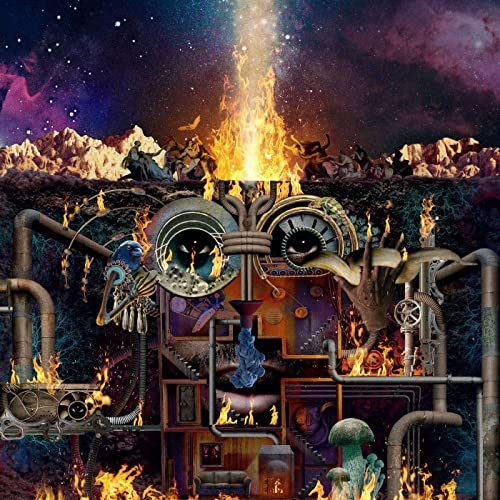 The name seems inscrutable at first. Flying Lotus. What the hell is that? A mythical dragon? A new “murder hornet” invading the Northwest? Some impossibly hard yoga position? Actually the latter is the closest to the truth but it’s not extreme in the least — you’ve probably sat in lotus position at least once in your life even if you don’t practice yoga without knowing it. Steven Ellison is a producer, not an emcee, but the name Flying Lotus invokes the image of someone achieving such a zen like state in Buddhist meditation they would levitate off the ground.

“Flamagra” won’t help you achieve this physically impossible task, nor would anything outside the mutant superpowers seen in comic books. Hearing George Clinton on “Burning Down the Charts” reminds me of the feeling I got from Parliament-Funkadelic records in my youth though. They once described it this way: “Free Your Mind… and Your Ass Will Follow.” There’s a mental peace that can come from vibing to a good instrumental, and hearing the Father of P-Funk jam on it is even sweeter still.

It’s because of appearances like Clinton’s that I can’t easily pigeonhole “Flamagra” as an instrumental album. FlyLo is a great producer, and if the entire album were just him showing off his incredible range of musical talent, it could stand on its own. Ellison has repeatedly proven his work can do just that, but the collaborations show he could set any price he wanted for a beat and it wouldn’t be too much. You may not even feel the funk on the first listen on tracks like “Actually Virtual” featuring Shabazz Palaces, but the jazzy free form behind the shaka-shaka percussion perfectly compliments the flow and makes it better with each replay.

And although Solange Knowles has often been expected to take a backseat to her better known sister, “Land of Honey” is yet another reminder that she should never be taken as lightly or lesser. As she repeatedly says “Hallelujah” over the Ellison track, my spirits lift higher and higher into the atmosphere. Be careful. You might just wind up in a flying lotus yourself.

Even the tracks without a singer, rapper or performer have a message. The title of “Thank U Malcolm” speaks for itself, but the jam still slams.

Many of the songs on “Flamagra” are short, but with 27 tracks in total you still wind up with well over an hour of music. One of the longer ones is the “Black Balloons Reprise” featuring Denzel Curry, in which Ellison does something I rarely ever hear him do — drop a familiar sample. In this case it’s “Ten Et Tiwa” from Alain Goraguer. I think it’s underused so that’s fine, and Curry really lights it up with his vocals to boot. “If the President fuck around and piss off ISIS/bury me in blueberry bills, jewels and ices.”

It’s hard to call someone who has been on the music scene for 15 years running underrated… but maybe? I don’t hear people talk about Flying Lotus in the same breath as DJ Premier, Alchemist, J.U.S.T.I.C.E. League, Evidence, Pete Rock, et cetera. That should change. One album alone may not be enough to do it but “Flamagra” won’t disappoint his long-term riders and should be enough to convince new people to hitch onto the bandwagon.