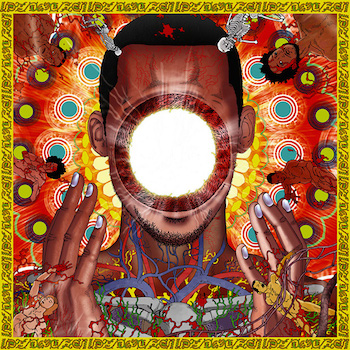 Stephen Ellison has been pushing musical boundaries since his first record as Flying Lotus, 2006’s “1982.” He came up in the underground L.A. beat scene alongside people like Shlohmo and Nosaj Thing. From the beginning he was straining against the constraints of that scene, which in itself was pushing in new directions by incorporating elements of electronic music into hip-hop production. By his third album, 2010’s “Cosmogramma,” Ellison was adding a jazz sensibility to his music, no doubt influenced by his cousin Ravi Coltrane and his aunt and uncle Alice and John Coltrane. Given that he comes from a family that completely blew open jazz music, it isn’t surprising that Ellison is attempting to do the same thing with electronic music. Having already explored “Los Angeles,” and the cosmos on previous albums, he tackles the afterlife on “You’re Dead!”

“You’re Dead” has multiple meanings. On one hand the album is a concept album exploring the afterlife as described in the “Tibetan Book of the Dead.” The album starts with the moment of death and explores the soul’s voyage in the afterlife. The title started out as a joke between Ellison and his friend and collaborator Thundercat. They imagined making music that was so heavy and amazing that once you listened to it you’d die. The title also reflects Ellison’s mixed feelings about the scene he came up in, and how it has died and mutated in the past eight years. That’s a lot to tackle in a 38-minute album.

“You’re Dead” is the jazziest of Ellison’s albums. At times it sounds like straight up 70s jazz fusion, something Herbie Hancock might have done. In fact, Hancock appears on this album, playing piano on “Tesla.” There are still synths, but keyboards, saxaphone, flute, and guitar are more present. It sounds like a jazz record with elements of hip-hop and electronic music, rather than a hip-hop record with elements of jazz. That’s ironic given that it is the first Flying Lotus album with actual rapping on it. Ellison appears twice as his alter-ego Captain Murphy, sharing the mic with Snoop Dogg on “Dead Man’s Tetris.” Snoop is an unlikely choice but his laid-back flow fits well with the spacey production. If you make an album about an out of body experience, why not with a rapper who is always out of his head?

The best pairing, and the best track on the album, comes from Kendrick Lamar on “Never Catch Me.” The beat alternates between serene and frenetic, with a plaintive piano chord, handclaps and Thundercat’s frenzied bass. It’s a tricky framework to rap over, but Kendrick fits in perfectly, spitting dexterous rhymes about pondering one’s own death. (Hiro Murai’s video for the song, which features two children dancing out of their caskets, is also a must-see.):

“You’re Dead” loses momentum after “Never Catch Me.” Much of the later two-thirds of the album is more atmospheric, reminiscent of 2012’s more contemplative “When the Quiet Comes.” There are still blasts of energy, like on “Moment of Hesitation,” but these are outnumbered by sparser, mellower songs. It makes sense conceptually, given that this is about a soul in the afterlife, but it is a letdown after the strong start. I wanted ten more tracks of “Never Catch Me,” and instead I got Angel Deradoorian’s ethereal vocals on “Siren Song” and Ellison’s off-kilter falsetto on “The Boys Who Died In Their Sleep.”

Despite “You’re Dead” not quite being what the album I wanted it to be, it is still a solid album. Ellison continues to grow and develop as an artist, making music that manages to be both challenging and enjoyable. He’s proof that producers don’t have to be limited by the confines of either hip-hop or EDM, and that beat music can be much more than something to nod your head to.