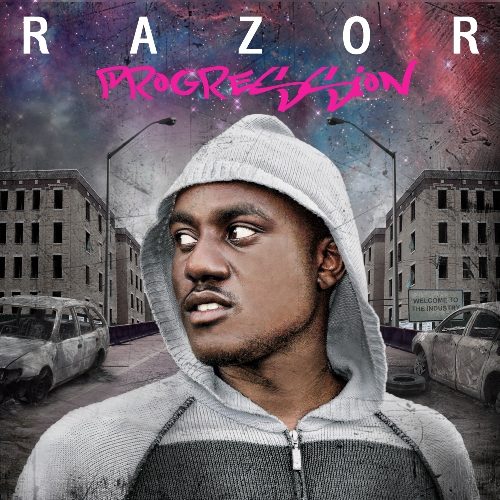 “Don’t worry how I look, I’m a heavyweight
My punchlines are my hooks, make ’em levitate
Everyone thinks I’m gettin paid
But I ain’t rich, I admit, my account’s seen better days”

As our UK Month at RapReviews winds to a close, I’m taking a moment to check out the free “Progression” mixtape from Northwest London’s own Razor. He’s been getting some accolades of late in the scene, including a nomination for Best Urban Act at the Exposure Music Awards, and he was featured on “The Hoods Got Talent” documentary. His PR people describe Razor this way: “Through his established blend of sincere tracks and heartfelt lyricism, Razor brings to light the difficulties of balancing these two lives.” All of this could easily be hype and not heat, but his “Hometown” video has received over 20,000 views and nearly 270 likes with less than 10 dislikes.

“Youths on the road, it’s like they die similar
It’s either they’ll shoot or stick the knife into ya
I don’t promote it – the crime sinister
But who can the youth look up to – the Prime Minister?
Who promoted the war, that can’t be right
They’re lettin soldiers in the army die
Bush and Blair should have fought the war
But they don’t wanna harm their life
So they’re the people in their country that’s killin them
If a youth gets, life, for killin one citizen
What should Bush and Blair get for killin millions?”

Seems to me there’s more than just a publicist and a press kit behind Razor’s success – he’s making a genuine connection with the people he reaches and he’s got a message far beyond the bling. It’s dangerous to make such ballsy political statements when you want to appeal to the masses, but his words turn out to be exactly what an audience who finds substance lacking in mainstream rap are looking for. At the same time, Razor goes just about as far deep in the UK underground as I’ve dug at any point all month long. I don’t recognize a single one of his guest artists – not their fault of course – but KD Blockmoney, Big Cakes, and Jamm Tyme may need the help of a publicist far more than Razor does.

“Progression” is also a big album for a first time listener of Razor to digest, a free album clocking in at over 70 minutes and 21 tracks total (though you can throw out the “Intro” and “Outro” if you like). I would have preferred a shorter introduction, perhaps an EP or a 40 minute LP, but never mind my bollocks. Like most mixtapes there are no production notes, in part because the beats on many mixtapes are recycled, but also because when it’s not sold at retail nobody thinks crediting everybody involved is that important. That’s a shame because whether original or reused, I’d give a shoutout to a few people. The spooky Three 6 Mafia sound of “Don’t Leave” is a winner, “Bang Bang” is not Cher OR K’Naan but it’s perfectly blended, “Sex Session” sounds like a stereotypical R. Kelly or Chris Brown song in a good way, and the mellow strumming of “Lose My Balance” puts the perfect note of closure on this lengthy release.

Now I can’t let Razor off the hook by offering him only praise. His delivery and rhyme scheme at times border on simplistic, which is a plus for non-UK audiences as he’s easier to understand, but amongst his peers may leave him regarded as a bit of a lightweight. He could challenge Parrish Smith for the title of “Mr. Slow Flow” and probably win it with ease, and sometimes his flow is so deliberate it feels forced – something I noted about another album recently by Cookbook. It doesn’t make Razor a bad emcee because he tries hard, but if he’d loosen up a little bit and let things flow naturally he’d be even better. Since this album is free I’ll limit the complaints to this level and say that Razor shows a lot of promise. Free or not, I look forward to Razor’s next release.