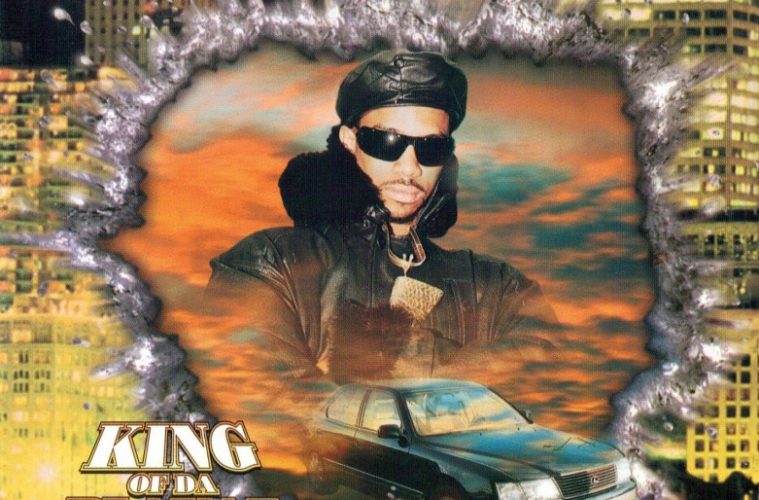 The term “classic” means different things to different people, making it difficult for anyone to unequivocally declare something classic. As critics we try to take on that difficult task, but as objective as we try to be we always include some personal opinion when judging music. So it’s no surprise that critics, who tend to be college educated, tend to favor music that the general population might label a bit too nerdy or conscious for their taste. For this same reason, street and gangsta rap just doesn’t get as much love as it deserves. Take Kingpin Skinny Pimp and the whole Prophet Posse clique, a group of rappers who has been steadily making records for over ten years. The only members of the original Prophet Posse to get any love from RapReviews.com are the Three-6-Mafia and even then Flash is no fan of them when it comes to their lyrical content. That brings us to Kingpin Skinny Pimp’s debut album, “King of Da Playaz Ball,” a work filled with dark and gangsta subject matter and equally dark beats courtesy of DJ Paul and Juicy J. Thousands of fans would probably be quick to tell you that this album is a classic and a must have for any rap fan. Some critics might be inclined to disagree since Skinny Pimp is no Pharoahe Monch, but this critic has been tearing up da club since day one and when it comes to classic Memphis rap it gets no better than this.

The first thing to mention on “King of Da Playaz Ball” is the production, handled by Juicy J and DJ Paul. Dropped at the height of the dark movement in Memphis, the production reflects the eerie and subdued music of the time. While today their styles are more varied, back then the self-proclaimed super-producers had a more consistent groove. Best described as music taken from the score of a horror movie, dark music featured beats that focused on strong snares and cymbals with simple samples and instruments. The appeal of dark music was not its complexity, but its ability to set moods. Just like three string stabs can cause utter horror in Hitchcock’s “Psycho,” DJ Paul and Juicy J were masters of keeping it simple but keeping it scary. Tracks like “Nobody Crosses Me” might have featured the same 3 to 4 notes over and over again for over ten minutes, but yet the mood created was so sinister you’d easily believe the warning not to cross Kingpin Skinny Pimp and the rest of the Prophet Posse. Of course, the duo also succumbed to the trends of the time as tracks like “We Ain’t No Playa Hatas” and “Midnight Hoes” are full of the gangsta funk grooves that invaded the west coast during the same time period but are done well.

The beats are only as good as the rapper who flows over them and in this case Kingpin Skinny Pimp does justice to them. In an era when most of the subject matter revolved around repetitive gangsta clichÃ©s (sound familiar?) rappers set themselves apart with their style and Skinny Pimp could flow with the fastest of them. Distinguished by an unrelenting barrage of words and references to evil and dark things, Skinny Pimp’s verses quickly gained an audience as he shows on “All About Them Prophets:”

“Y’all niggas ain’t no killers, to many Prophets be on my chest
Havin’ me stressed, suicidal thoughts, I was up every night
I never rest, to many groupies, claimin’ they straight
Hangin’ around me, knowin’ they haters
I ain’t never been through what I been through
I dare you, fuck you pimp-a-traders
Skinny Pimp I’m on Anna, and I’m a grown ass man
Feedin’ my Momma, beatin’ my Father
You think that I’m playin’? I’m strictly sprayin'”

With a name like Kingpin Skinny Pimp it’s also no surprise that the man had more than a few things to say about women. On “Midnight Hoes” he drops a ruthless look at the life of a pimp:

“Pimp them hoes, break them sluts, ride clean, smoke your dope
Keep a down bitch for the rest of your life, making that paper from coast to coast
I hear it so many times, a woman can be a man’s weakness
I speak this pimpin from experience, fool now peep this
My baby is the queen of the shake junt, and I am the king of the playaz ball
You fuck one, we’ll break one, pimp slap one, now smoke one
Make sure its da ink, now Juicy pass the Cristal to Piznall, now toast that drink”

The gangsta lifestyle is the focus of “King of Da Playaz Ball” from start to finish but there’s still things even the most uptight rap fan could appreciate such as the superb storytelling on “Long Story:”

“A legal pimp is a lawyer in the court making paper
I was sporting snakes while this fool was buying gators
The judge mad as hell, and the judge was a ho
Finna slap me with assault cause I threw my ex-wife to the floor
An inmate going to trial, standing next to the door
Behind the door was prisoners, where he might have to go
If he was found guilty for murder in the first
Plus, witnesses testified which only made it worse
The state came strong, meaning he was found wrong
The last thing in the judge head was sending the mane home
They offered him some time, three strikes are rather light
He’s a coward-ass killer shaking craps on the dice
He’s scoping out the guard with the heat in his holster
Escorting him to the door, so he moved an inch closer
Then bowed him in his stomach, grabbing the gun from his side
Snatched the PD by her wig, motherfucker surprise
The gun to the head of the Public Defender
His family in the crowd begging “Stop, please, surrender!”
The other guards around put they guns in the sky
The PD was terrified, the judge was screaming “Hold your fire!”
He’s backing up out the courtroom dragging the ho in a sleeper
He’s heading to the getaway car to make the story get deeper
He let the PD go thinking “Damn I oughta smoke her”
Sticking his pistol in the window of a running ass Nova
Behind the woodgrain stereo was a nigga full of P
Paranoid cuz the duals roared balling down Poplar street
The judge called recess, but I’m finna come to court
To hit the Chinese store to get a couple of loose Newports
My beeper started to beep and it was my lawyer, want his money
Talking bout bring your ass home cuz I owe him two hundred
Since I ain’t finna pay him, they gonna give me time
So I’ma give them time, to catch me with the crime
I balls down the street fiending for some marijuana
No ones on the chase but APD’s, they hitting the corner
Dude bailed out the car, then he ran by Kentucky
I was parked by the church across the street now he was lucky
I opened up the door, then he jumped in the seat
The Nova crashed to the pole cold fired up a sweet
Now both of us was wanted, cuz both of us were broke
The only plan I had in mind was to rob a corner store
Helicopters in the air and the sheriffs right behind
A nigga that’s flying down Thomas, letting down the window, grabbing that nine
As he shot, the windshield cracked, they shot back now we on flat
I’m burning through Hertz Village cuz the road block on my map
He got caught, the ambulance escort him from the vacant house
They beat him down like Rodney, the W-W-F style
I saw the news, I fell asleep from the long chase
I woke up 3 AM, with the flashlights in my face
It was a long story…”

For any rapper to put a story like that is impressive but to spit it straight for over three minutes makes it that much doper.

“King of Da Playaz Ball” is a classic album no matter which way you try to paint it. But just because it’s a classic album doesn’t mean it has universal appeal. Much like the horror movies from which DJ Paul and Juicy J get inspiration for their music, dark music from Memphis is often times scorned by the mainstream. Even the same critiques can be applied to both art forms â€“ the overabundance of violence and amateur nature of the genres. So just like regular movie fans tend to dismiss “Night of the Living Dead” as just another zombie flick, “King of Da Playaz Ball” tends to be dismissed as just another gangsta rap album. To be fair, at times it’s hard to distinguish this music from other hardcore gangsta rap that came out at the time. But at other times it is clear that Kingpin Skinny Pimp drops more than your average gangsta rap. With its dark beats and imagery, this is gangsta rap at its bleakest and most compelling extreme and that in itself is enough to make it noteworthy. Add to the mix the fact that this marks the beginning of Skinny Pimp’s career â€“ one which has evolved in styles but is still going strong â€“ and it’s hard to deny the importance of this CD. While not perfect music or music that’s for the faint of heart, “King of Da Playaz Ball” (along with more early Memphis albums) is definitely worthy classic music that reflects an era and mindset that is long gone from the rap game.