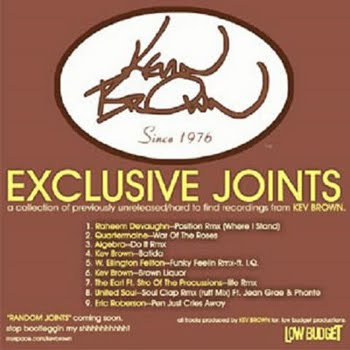 Kev Brown is the picture of a classic struggling artist. Fans drool over his work as much as his critics, and he’s been recruited by the likes of De La Soul and DJ Jazzy Jeff for his production work. The acclaimed producer/rapper has even garnered favorable comparisons to legends like Pete Rock and J Dilla, but even with all this respect, he remains very much under-the-radar. His solo debut “I Do What I Do” was a commercial failure, even for an independent release, and Kev has even spoken on his personal struggles in his blog. His situation would almost border cliche if it wasn’t such an unfortunate reality.

“Exclusive Joints” is definitely an exclusive album. Featuring rare, unreleased tracks, instrumentals and remixes, fans of the Low Budget forerunner won’t be able to find the album in stores, as it is an internet-only release (peep his Myspace). At just 9 tracks and roughly 34 minutes in length, it’s a tease in anticipation of his upcoming “Random Joints” (let’s not get TOO creative with the titles now), but it still packs a punch.

“Exclusive Joints” shows an apparent correlation between Kev’s music and his own life, as there is an extremely melancholic undertone throughout the listen. Kev’s beats are always mellowed-out, but his lyrics (which were never the happiest, to begin with) have taken on a whole new emotional dip. And this would seem to be contagious, as he only raps on one track himself, the gorgeous “Batida.” With a trademark hazy beat with mysterious voices and dusted chimes, Kev sets himself up for a frustrated verse: “yeah, it’s just the way the game goes, I guess the ones on top ain’t always the best,” and “I need a vacation, but can’t afford it.”

Eric Robertson can’t help but write another sad song on “Pen Just Cries Away,” while Phonte of Little Brother spits an outstanding verse on the “Soul Clap” remix. Up-and-coming R&B star Raheem DeVaughn fits Kev like a glove on the “Position” remix, and Stro of the Procussions wrecks the jazz guitar strokes of the “Life” remix. Kev’s ability to produce cross-genre shines particularly bright, as he weaves in and out of rap and soul at whim throughout the album, sounding as good over one as he does the other.

Quartermaine (fellow Low Budget emcee, equally slept on) kicks an inspiring rap on “War of the Roses,” and “Funky Feeling” with W. Ellington Felton is a throbbing jam complimented by delicate guitar plucks. “Brown Liquor” is the only instrumental, a tight joint that will strike a chord with anyone familiar with Kev’s leaked beat tapes.

“Exclusive Joints” is a relaxing listen. Even with a depressive undertone, it’s still a treat, very suitable for a drive to anywhere, and easy to pop in the stereo (a trait Kev Brown projects tend to share). At a bargain price

it’s hard to avoid his CD, so stop bootlegging his shhhhhhhhhhhhhh!