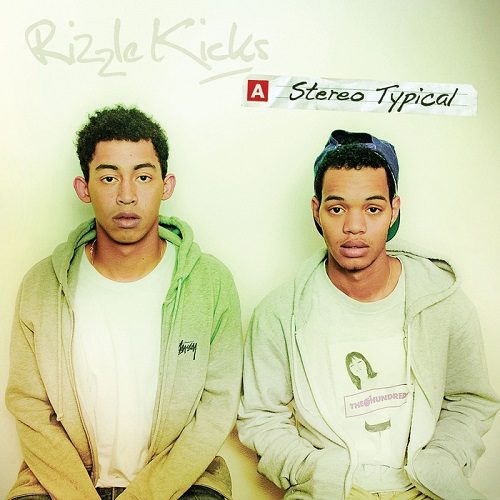 We continue UK Hip-Hop Month at RapReviews with this review of Rizzle Kicks. The duo of Jordan ‘Rizzle’ Stephens and Harley ‘Sylvester’ Alexander-Sule are something like a phenomenon, having sold over a million singles and 300K albums despite only releasing their first CD “Stereo Typical” a year ago. These two young and hip Brighton artists met at a time when they were studying for careers outside the rap field, but their mutual love of the arts became apparent when collaborating on a mixtape Jordan was working on where Harley sang on a few tracks. They adopted a football (to the yanks that’s soccer) nickname Jordan had from childhood as their group name and officially became a group in 2008.

Now in their early and mid 20’s, it took Rizzle a few years of kicking around songs in their bedroom studios and releasing amateur videos on YouTube to build up their buzz. “Down With the Trumpets” was an early success online, pairing their verbals with an infectious Dag Nabbit and Mike Spencer beat. If you heard the instrumental and mistook it for a song by Cypress Hill or Frost that would be natural – these trumpets have a very Latin music salsafied feel. Since the official release of the song as a single, early homemade videos have been pulled down and replaced with the professional version seen below.

At over 12 million hits and counting, it would be fair to say Rizzle Kicks went viral, which makes it somewhat surprising to me as the auteur of this review that they aren’t better known in North America. It would be like Psy’s “Gangnam Style” going viral, but only being known in Korea, Thailand and the Phillipines. Their rapid ascent on the UK scene has also brought out their share of haters, and even though only 2% of the total feedback to the song on YT is dislikes, that still amounts to over a thousand people flipping a collective middle finger their way. I can’t pick out anything about the rhymes or beats to hate on though.

“We’re rowdy, girls make our judgeent cloudy
But when the sun comes out we’re still alkies
We don’t wanna be lousy, or shameless
But we’re runnin ’round like we’re brainless
Now I’ve got grass stains on my brand new white trainers
(On my brand new white trainers)
Um… I know a few guys hate us
They’re as compelling as neighbors so laters
It’s blaters we’ve got our own style, you know now
So go wild and get hosed down”

No one would accuse them of being profound here, but it’s perfectly acceptable as both a hip-hop headnodder and party music for a night out at the pub, exemplified by Rizzle’s remark “I could have been a headmaster (but) I got fives in charisma.” He was born to entertain. The success of this single was followed by the upbeat swinger “When I Was a Youngster,” produced by The Rural and featuring an island swing typical of the UK’s heavily Carribean influenced hip-hop scene. The only thing I can imagine their detractors hold against them for catchy well produced songs like these is that it doesn’t speak to the serious socio-economic problems facing today’s British youth. To that hypothetical complaint I can only reply that hip-hop needs to be a balance no matter where you live – every Immortal Technique needs a Wiz Khalifa, and every Klashnekoff needs a Rizzle Kicks.

If it’s a crime to make catchy music that’s a pleasure to listen to, then Rizzle Kicks are hooligans of the highest order. It’s nearly impossible to listen to the Fatboy Slim produced “Mama Do the Hump” and not tap your feet, taking the bluegrass twang of the rural U.S. and making it hardcore hip-hop akin to the UK version of Bubba Sparxxx. Ant Whiting recurs throughout as a producer on songs like the slow melodic narrative “Traveller’s Chant” and the reflective bopping dirty “Learn My Lesson” – showing more depth than their haters will give them credit for. “Prophet (Better Watch It)” apparently didn’t chart as a single, but The Rural’s beat keeps it on repeat as does the carefree vocal delivery of the two protagonists. Quiet as kept “Stop With the Chatter” is one of the album’s best though, as Tom Caruana brings old school hip-hop breaks and sounds to modern times over a series of jazzy piano & horn breaks.

Whether the establishment likes it or not, there are times when a hard working artist or group will break through to the mainstream seemingly out of nowhere, thanks largely in part to grassroots fans and internet viral marketing spreading their sound like wildfire. Rizzle Kicks may have benefitted from coming along in an era where you can be a success overnight, but having listened to “Stereo Typical” I can definitely say their title is intended to be ironic. There’s no way to call what Rizzle or Sylvester do “typical” when almost every song on their debut album is worth a repeat play, which is not typical of ANY artist no matter how well or poorly established they are. Yanks need to stop sleeping on this one.