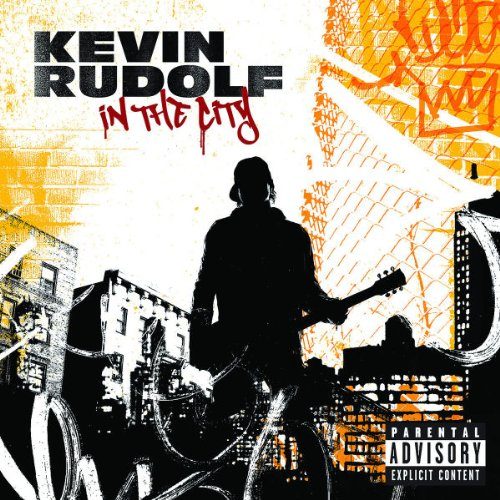 Kevin Rudolf :: In the City

I was 12 once, and, like many adolescents, was a big fan of Cash Money’s little projects. Back then, Lil’ Wayne stood out to me – he was underwhelmingly talented, and surrounded by fans, many of whom were quite young. In fact, kids always seem to have a thing for him, even as a man – I think, perhaps, it’s the affinity of mind – and although he has matured artistically, he is, almost a decade later, selling to a similar audience, with only an occasional sophisticated listener.

Regardless, Cash Money has really changed. They no longer peddle the irredeemable, nor flaunt those inauspicious album covers, but have improved in every way. Judging by Lil’ Wayne’s new directions, they’re also willing to expand to other genres. Take Kevin Rudolf, for instance. He’s been called a “prodigy,” and the guitar is central to his image. His interest in hip-hop (and good songwriting, for that matter) is minimal on record, but he’s sleek, infectious, and has a good, if hackneyed, ear for melody. And Cash Money is certainly that – style over substance, though not without some occasional flairs of excellence.

And thus, I do think Kevin Rudolf is talented. In fact, he can craft something quite good if he goes for some unity, conciseness, and improves his song writing abilities. Take “In the City,” the opening track. I can’t detect any notable guitar work, just some repetitive riffs, and a perfunctory little breakdown in the middle. Still, it’s anthemic – a problem, really, if I take such an artistically neutral term and use it as a crutch as I fish for compliments on Rudolf’s behalf:

“Every day I’m a star in the city
Walk the streets like a wanted man
All the time got my shine, lookin’ pretty
Motherfuckers will know who I am”

“Let it Rock” is the album’s first single, and a better song than the first. Rudolf’s guitar is subtle in the background, and comes up for air in the chorus. His ear for melody is especially apparent here, as he pretty much does everything right: start-stop rhythms, alternating vocals, and heightening bathos right before the hook comes on. Rudolf knows the formulas rather well – again, not a bad thing, but it keeps the stuff from even grazing excellence since it’s often unoriginal. Lil’ Wayne makes a disastrously perfunctory appearance, offering some variety, but little else – not a bad choice, though, since the monotony tends to come on rather quickly.

“I Song” is acoustic, subdued. It’s a highlight, as, like above, the sense of melody is palpable. His vocals are strong, but the writing is juvenile:

“Livin’ it Up” milks the prototypical idea of an infectious pop song: only a few genuinely audible musical parts, all harmonizing, start-stop rhythms, and quickly changing vocals. Again, melody, melody, and a little bit of sparkle – and that is all.

“NYC” is another listenable tune featuring some lush production, clichÃ©d songwriting, and a forgettable appearance from Nas. In brief, the entire idea – a “city of dreams,” “schemes,” and so on, is undeveloped. And so far, I’m not convinced it’s in Rudolf’s grasp just yet to handle any conceptual nuance. I submit “Scarred” as evidence, an acoustic piece which is musically tame, in a dull sense: repetitive guitar, cluttery background bits, and so on. The chorus is straight from anything Linkin Park has done, and has, perhaps, the worst songwriting yet. A self-mutilating girl intimidated by the city, she picks up the bottle and thereby sells her soul:

“Great Escape” is a 7-minute epic that closes the album. In these 7 minutes, it pretty much repeats the same idea perpetually, and can be cut down to a solid 3 minutes. A light piano, an acoustic guitar – it does what pretty much any other acoustic song does here, except an emphatic electric guitar comes on quite formulaically, too.

“In the City” offers good production, excellent melodies, and – of course – the same song, idea(s), and kinds of guest appearances many times over. Still, I’d recommend it as a blueprint for potential. It’s also good to enjoy on a visceral level, if you’re interested in that sort of thing.