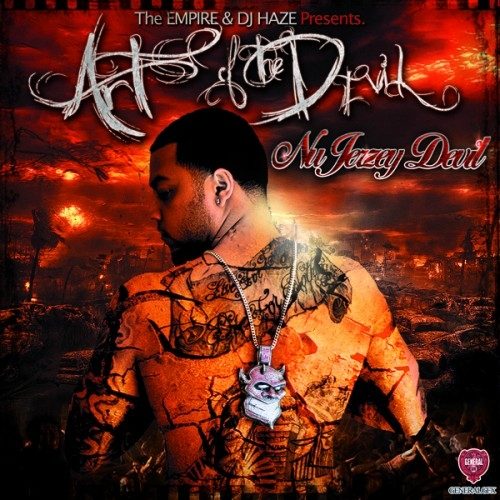 In rap, as elsewhere, it’s all about who you know. One well-placed connection, and the world is your oyster, regardless of your actual ability. This is the explanation for the rise to prominence of many a weed carrier in rap crews (Tony Yayo, anyone?) and a big reason why any album with “presented by” in the title evokes a skeptical response.

Nu Jerzey Devil gets his bona fides by way of The Game, as he is head producer for the Compton MC’s Black Wall Street Records. When behind the boards, he is competent enough, so at least this position is justified. It’s in his attempt to branch out that he exposes the pitfalls of placing social networking above talent evaluation.

In anticipation of his upcoming solo debut, set to drop this fall, NJD has hooked up with The Empire and DJ Haze to present (there’s that word again) his latest mixtape, “Art of the Devil.” It is essentially a paint-by-numbers affair, following every last mixtape convention on the books, from the overlong tracklisting to the unnecessary Lil Wayne features. Hell, even Ray J shows up to contribute a mind-numbingly inane chorus for the obviously titled “So Wet,” ruining an otherwise good beat selection for the song.

Let me go with the Equal Time Rule for a minute and note that the selections here aren’t exactly awful so much as they are completely predictable and banal in every way. “Rapper Slash Rocker” featuring Ya Boy boasts a choice Weezy chop job on the hook and a decent enough flow from NJD, even if it is jacked straight out of the Young Chris book from his “Can’t Stop, Won’t Stop” performance. The self-produced “Different Girls” is formulaic but aurally stimulating enough to make you forget it’s the gazillionth Lil Wayne guest appearance you’ve heard on mixtapes released in the last ten days alone. In fact, as long as he keeps it simple and straightforward, Jerz does alright with his limited repertoire. It’s when he ventures outside of the box that things head downhill. The slowed-down singsong delivery on “Put My Flag On” is intolerable even for the track’s short minute and a half duration. The same is true of any of his attempts at singing, which fuck up the hardcore vibe he has cultivated on the rest of the album. “Shyne Like Me (freestyle)” is a similar example, with its ridiculous outro of “smoke la-la” repeated ad infinitum. The two remaining original tracks, “How I Done” and “That’s Me,” are both ruined by his attempt to get all 50 Cent (ironic, I know) on the hooks.

The best of these original songs is “Somebody’s Gonne Die 2nite” featuring Viper, which is mostly down to producer Oddz&Endz’s booming drums and sinister organs. NJD isn’t necessarily a bad rapper, just one who is only able to operate within the narrow confines of a good, straightforward beat, and Oddz&Endz provides him with exactly that. The only other noteworthy moment is Young Buck’s appearance on “Hate,” which he elevates with his presence alone. Even if it’s only to diss Fiddy, I hope we hear more from Buck in the near future.

Unfortunately, after listening to “Art of the Devil,” I can’t say the same for Nu Jerzey Devil, no matter who cosigns him. Yeah, he’s got all the right ingredients on this mixtape, including some dope beats and hot features, but all the best moments come from other people’s contributions â€“ never a good sign. In the end, Jerz benefits greatly from having friends in high places, as he himself notes on “How I Done” (“I’m so materialistic, so well connected”). And while that may be enough for some, it doesn’t do it for this hip hop fan.