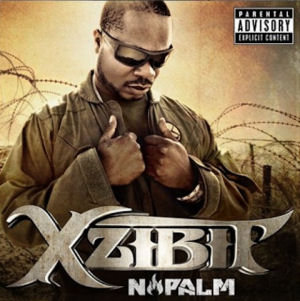 Xzibit is a rap icon. Not because he’s a gold and platinum recording artist or because he gave the ‘rapper’ archetype an unusually personable face on one of MTV’s most famous shows. No, the iconic figure that is Xzibit emerges whenever he opens his mouth and raps. His voice and flow are a symbol of rap’s vigor and vitality. There are a million and one people who rap. But Xzibit IS rap. You know it when you hear it.

Having an advantage like that invariably leads to hubris. At times X to the Z’s flow has been mightier than his pen, but he’s never been all bark and no bite. The relevance implied by his voice was ever so often matched by his lyrics. In terms of what he represents, he has shown consistence across underground favorites “At the Speed of Life” and “40 Dayz & 40 Nightz,” commercial victories “Restless” and “Man vs Machine,” to later works. While many of his peers, especially on the West Coast, have opted for a self-explanatory, well-selling rap persona, he’s simply Xzibit, the guy who corners and confronts you, the listener, to teach you a lesson – verbally.

As a rapper X is always in action, with or without the lights and the cameras. He’s the quintessential rap agitator who has come to shake things up, every song a Cali quake. The danger in all this is that the artist eventually becomes his own stereotype, following a seemingly failsafe formula. A dÃ©jÃ  vu is inevitable when considering the album titles and respective opening tracks of “Napalm” and “Weapons of Mass Destruction” (“State of the Union”/”State of Hip Hop vs. Xzibit”). Is Xzibit in 2012 simply another old dog unwilling to learn new tricks?

The answer is no. “Napalm”‘s titular track, first appearing on a Travis Barker mixtape last year (credited to production squad 1500 Or Nothin here), is a stunning rock excercise where X adopts the delivery of a (legit) rock rapper. “Napalm” walks a fine line between supporting the troops (he performed live in Iraq in 2011) and deploring the insanity of war. A key scene in the song is a lushly orchestrated break where G.I. Joe dreams of a John Doe existence before waking up to the hail of bullets (i.e., the thundering guitars) again. For all its technical mastery, however, “Napalm” lacks the eloquence that would prevent misunderstandings, making it inevitably fall behind rap’s quintessential reckoning with how individuals get caught up in Uncle Sam’s wars, Eric B. & Rakim’s “Casualties of War.”

The rapper who once dubbed himself the black John McClane is captivated by the image of the warrior, and thus sympathizes with the soldier and the G. It’s not like he ever claimed otherwise. Back in ’96, on his breakout hit “Paparazzi,” he only saw two options for his ilk: “Either you a soldier from the start / or a actor with a record deal tryin’ to play the part.” His dad spoke as a Vietnam vet on his second album, and on “Weapons of Mass Destruction” he remembered the Marines motto ‘Semper fidelis’ (‘Always faithful’) he taught him. It was also on that album where X revealed, “My father was a soldier, my mother was a writer.” After 2002’s “Missin’ U,” Alvin Joiner has again found a way to incorporate her memory into his music, on the song “1983.” Named after the year of her death, “1983” features her recorded voice, providing additional emotion to an already touching track that sees X reflect on his life and career over a dramatic, drum-free blend of strings and piano:

“Heartbreak, disappointment
My mother died when I was nine, I just wanted to join her
‘Nah Mr. Joiner, you get to California
I got somethin’ for you to do’ – it’s like I was annointed
Resurrected, found my purpose
I remember meetin’ Dre, bein’ nervous when I would kick my verses
I was virtually worthless, my whole life was a circus
I was sleepin’ with serpents and I thought it was worth it
[…]
I drink it all and I smash the bottle
Self-medicated, numb, but I’ma feel it tomorrow
It feel like pain and sorrow was like a second skin
But now that pain is gone I got my second win
Only the strong live long, you better settle in
I’m fightin’ forever, I will never let the devil win
1983, that’s when my journey begins
I searched everywhere for strength and only found it within
This for me and my kin, still dyin’ to live
Livin’ life to the fullest ’till I see you again”

On another poignant tune he turns once more to the military branch, sampling a disabled Iraq veteran on “Meaning of Life.” While he denies knowing the answer to that perennial question, songs like “1983” and “Meaning of Life” suggest that Xzibit is at peace with himself and the world. If you had any doubts, the triumphant “Everything” packs enough punch to convince the most sceptical. Rick Rock offers up a beat that in all its sluggishness is firm and elegant, forcefully backing X’s cocksure communiquÃ©s:

“Muthafucka, my living room look like a drive-in
When I open my eyes a bunch of bitches play violins
Nothin’ but respect when I walk through the lion’s den
Because I kill everything, bitch, I kill everything
Nothin’ ever compares with the strength of a free mind
You’ll find the most dangerous weapon ever acquired by mankind
Use it to fight for your freedom, and oppress your oppressors
when you mold ’em and lead ’em – fuck a postitive message
This is a lifetime of lessons, boiled down to the essence
There’s no payment for passage; my immaculate presence
make every revenue stream flood, look where it took me
And make that money stack higher than giraffe pussy”

Those expecting Xzibit to deliver bangers in the tradition of “What U See Is What U Get,” “Multiply” and “X” will not be disappointed. The Akon-produced “Movies” is simply a slapping West Coast cypher (featuring The Game, Slim the Mobster and Crooked I), the kind X has been stingy with in the past. “Louis XIII” marks the return of the core Likwit Crew, scored by no less a producer than Dr. Dre, who captures the collective’s frisky, festive vibe to a tee. He crosses swords with another X that marks the West Coast, RBX, on “Dos Equis” while Rick Rock provides his futuristic funk and The Game a whispered chorus. In turn RBX performs hook duty on “I Came to Kill,” another display of Xzibit’s thespian talent over a sinister Illmind beat.

As is to be expected from a project of this caliber, some songs can’t escape their destined filler status. The crowded “Killer’s Remorse” is an unfinished afterthought to “I Came to Kill.” “Up Out the Way” has essentially stolen away from an E-40 record and “Gangsta Gangsta” is undeserving of carrying the name of a rap classic. Opener “State of Hip Hop vs. Xzibit” may not live up to its title either but sets the tone nicely with its menacingly marching Beat Butcha beat and X’s trademark drill sergeant bark.

“Napalm” also tones things down at the right time. The airy Socrates production is unfamiliar ground for both X and guest Prodigy, one reason the pairing works surprisingly well. Pittsburgh team E. Dan and Wiz Khalifa are just the men for the uplifting “Forever a G,” recalling the ethereal, smoked-out Bone Thugs-N-Harmony sound. Ensayne Wayne and Ron Fair score the soundtrack-like “1983,” the S1 and M-Phazes co-production “Stand Tall” settles in the contemplative corner of today’s pop rap sound and finally the crew of David Banner, Wiz Khalifa and singer Brevi even drag the X Man on the dancefloor with “Enjoy the Night.” For all its musical diversity, “Napalm” is remarkably focused, not forsaking the established Xzibit sound but neither rehashing it. The star of the show acts once more as a tower of strength while escaping artistic petrification. We wouldn’t really have it any other way from a guy who embodies rap.