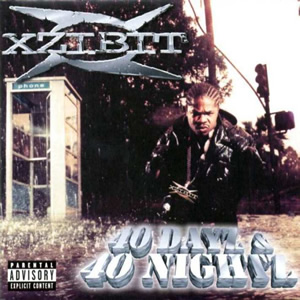 Before the Dr. Dre collabos, before kicking it with Snoop, before the big budget and anything resembling good label support, Xzibit was, simply put, a bad motherfucker on the mic. While Xzibit is still easily one of the most rugged and hardcore MC’s in the game, his last album before he blew up was on a whole different level. Bottom line, it was one of the rawest hip-hop releases of all time. Stripped down beats and bad ass lyrics, a simple formula, and who better to execute it than “the big bad insane black John McClane”? This, his sophomore effort, was heavily anticipated by underground heads fiending for more material like they found on his debut “At the Speed of Life,” and it would not disappoint.

The first song “Intro (The Last Night)” is a perfect example of what this album is all about. The minimalist beat provided by Sir Jinx is provides the ideal atmosphere for Xzibit to drop rhymes that can’t be described as anything other than pure, untainted hip-hop:

“The official representative, LAC
This is prophecy manifested by X to the Z
Victory, strike a B-Boy stance in khaki pants
Never get along, like red and black ants, advance
When you staring at this concrete that move like liquid
Like a nigga with no legs, I ain’t trying to kick it
Too much to finish, a menace without enough time
My mind only think punchlines, you probably thinking of the wrong kind
Cuz if it’s jokes, nigga, nope
The kind that drop on your eyes, your ears, your nose and your throat”

The manner in which Xzibit attacks this track makes the lyrics that much more intense; there are few if any MCs who drop lines like those that are as vicious in their delivery as the X Man. The next track is a Golden State Warriors collabo, “3 Card Molly”; the group, Xzibit, Ras Kass, and Saafir have styles that compliment each other perfectly, and everyone drops a gem of a verse. Ras Kass has the standout performance here, with lines like “If you looking for sympathy, you’d better look between R and T in the dictionary.”

The hit single from this album was “What You See is What You Get.” Despite the fact this song blew up and set the record for consecutive weeks at #1 on Rap City’s Countdown, the notoriously poor promotion team at Loud did not see it fit to give Xzibit another video for this album. Despite all that Xzibit proved in an era of shiny suit rappers and popping Cris in the club you could still have a hit without watering down your material down The majority of the album is comprised of cuts like this: gritty, hard edged beats with battle crafted lyrics to match. One of the exceptions is “Shroomz,” a with a video game sounding beat, and Xzibit kicking a very well constructed story rap about the first time he tripped on mushrooms.

“Shrooms? Yeah, that’s some other shit
One of the reasons why George Clinton sees the Mothership
How it make you get? Fucked up, throwing up guts,
or do it have you stuck with soft dick and can’t fuck?”

“Los Angeles Times” is more of a conceptual track, with Xzibit mixing his usual battle raps with descriptions of what life life in LA is all about. Mel-Man creates an excellent beat for this one, and the lyrics are extremely on point. This is my personal favorite track on the album, as it is probably the most well rounded song on the album, with an ill beat, and it showcases all of Xzibit’s lyrical skills.

The guest spots on this entire album were well planned and fit right in. The only outsiders were Method Man and Jayo Felony who showed up on “Pussy Pop,” and Montageone on the finale track “Recycled Assassins,” and they all kick competent-to-nice verses. The others were the Golden State Warriors (Saafir and Ras Kass) on the aforementioned “3 Card Molly,” and Likwit Crew mainstays Defari on “Handle Your Business,” plus King T and Tha (Alkaho)Liks on “Let It Rain.” Unlike many albums, none of these collabos sounded forced or unnatural; they do not hinder the album’s flow or simply exist for the sake of having a big name guest.

As tight as his material is now, we’ll probably never see Xzibit quite like this again; in the future, he’s more likely to be spitting alongside Snoop and Eminem than Tha Liks and King T, and over tracks produced by Dr. Dre and Battlecat rather than Sir Jinx and E-Swift. If that’s where Xzibit wants to take it, I can’t blame him; Restless was bananas too, just in a different way. He said himself that he felt he’d earned the right to get his shine, that he’d proved himself when it came to underground hip-hop and battle raps. You damn right he did. This album was bare bone: no watered down cuts, no commercial material, no compromise. I only have one thing left to say: If you consider yourself a fan of true, raw, pure hip-hop, cop this album. Period.