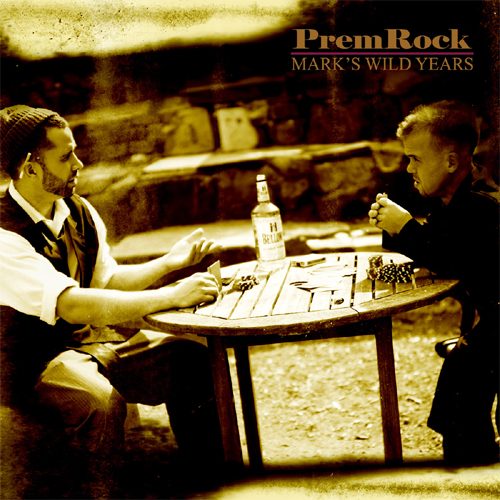 Having become a convert thanks to an album with Willie Green, I was more than pleased to hear PremRock was back in 2012 with “Mark’s Wild Years.” As a bonus this brand new LP is available via a name your own price option. Now there’s only two ways you could decide what to pay +before+ downloading the album – take my advice at the end of this review or stream the album via the embedded player below to know whether or not you feel it. I’m going to suggest doing BOTH.

“Mark’s Wild Years” is a conceptual album inspired by singer and songwriter Tom Waits, which is made obvious from the opening song “Step Right Up,” which interpolates the bassline from the Waits jam of the same name – although PremRock decides to rap over it at double the speed. If you’re not familiar with Waits he’s got a raspy growling vocal delivery, one which harkens back to old times blues, and one almost inconceivable coming out of a skinny white guy from Pomona. If that seems blunt or unfair, I dare you to listen to the original version of “Step Right Up” and not think you were listening to Lightnin’ Hopkins mixed with Louis Armstrong.

A familiarity with Waits’ extensive catalogue can improve your listening experience, but isn’t strictly necessary thanks to Prem’s narrative ability and stellar delivery. A case in point is the song “Christmas Card From a Hooker in Prague,” which is a direct rift on Tom Waits’ “Christmas Card From a Hooker in Minneapolis.” The original version is a narrative from a prostitute writing a letter to a john named Charlie, and in this case PremRock changes up the context so that he’s the protagonist reading the hooker’s letter.

“Well Mark I think I’m pregnant, I’m livin’ off the government
My man he takes care of me, he drops me off at therapy
He bets down at the track and, yesterday was rough
But he wouldn’t put his hands on me, he isn’t like the last
Where’d you get that gash from? People they would ask
I would only shake it off, change the topic and laugh
I stopped usin’ dope, I gave up the gin
I bought a new coat cashmere around my chin
In the wintertime my neighbors say I look like a movie star
But you know me Mark, I’m too shy to reply”

The end of the story in both versions is a twist that I’ll let you discover for yourself if you’ve never heard either one – and reveals the letter writer herself could have had a rap career based on her ability to boast and exaggerate. “Earth Died Screaming” is in some respects even more of a swerve given that Waits wrote the original song inspired by the movie of the same name, despite having never seen the sci-fi classic itself. Quoth PremRock:

“Stick my hands into speech
like man it gets deep
The panic’ll creep
Panoramic visions of damaged mystique
Peep! while you preach World Peace
The World is in a state of eternal sleep
It’s gets deep
WEEP FOR YOUR MOTHER!
Am I the one for my brother to keep
I’d rather compete capiche
I thoughts peeps were being facetious
Drawing for the blind like Venetians”

If it’s not clear from the quotation go ahead and cue this song up using the player above and you’ll see that Prem nee Mark is not just “rapping” here. This is closer to spoken word poetry, delivered purposefully, leaving accents on specific vowels as you follow the beat(nik) through the track. The last two lines above are the kind of subtle double entendre that may go over the heads of people listening casually or just enjoying the production (which is top shelf) but it rewards the observant listener with an inner smile knowing the artist used this opportunity to not only say something meaningful but do it in a clever way to boot.

Now let me go ahead and offer you the grand summary that I teased in the opening paragraph of this review – if I had to put a price on “Mark’s Wild Years” it would be $10. I know that seems bold for a download which by its own admission you can name a price of $0.00 for and get free, but this album shows an attention to detail that deserves more than just your monthly bandwidth cap. Saying that Tom Waits inspired this album musically, even lyrically, just doesn’t do it justice. The producers he chooses to work with, from Willie Green to Adam Selene to the downright bizarrely named Steel Tipped Dove get on his level and clearly have to dig Waits as much as he does, which makes this more than just a tribute album – it is a testament to the legacy of TWO artists as opposed to just one.