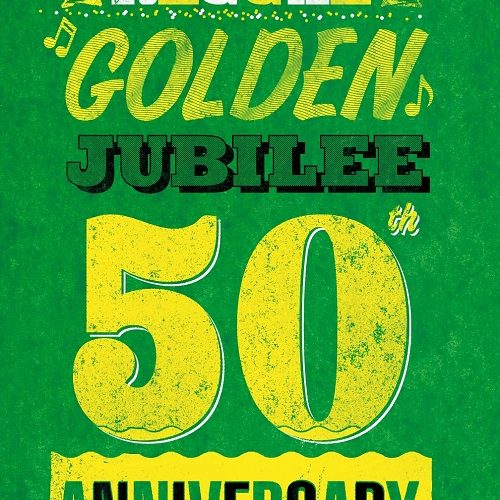 This year is Jamaica’s 50th anniversary as an independent nation. To celebrate, Edward Seaga, who helped draft Jamaica’s constitution and was Prime Minister in the 1980s, has curated a four-disc box set that highlights the development of Jamaican music. It may seem odd to have a politician curate a collection of music, but Edward Seaga is more than just a politician. He worked in the music industry prior to his career in politics, founding the West Indian Recording Limited label, which he later sold to Byron Lee. The man knows his reggae, especially early reggae, which is featured heavily on this set.

In fact, what sets “Reggae Golden Jubilee” apart from the many other reggae compilations out there, including VP’s own “Out of Many” compilation released earlier this year, is the emphasis on early Jamaican music, and the breadth of music covered. The first disc is all early ska and reggae by artists like Desmond Dekker, Derrick Morgan, Justin Hinds, and Prince Buster. Some of these songs are classics that you may have heard on other compilations (“Carry Go Bring Home,” “My Boy Lollipop,”), but there are also some deep cuts. You can hear the influence of early American R&B on the Jamaican artists on these early tracks. Theophilus Beckford’s “Easy Snapping” and Higgs and Wilson’s “Manny Oh” sound like early sixties doo-wop with a Jamaican lilt. The island was heavily influenced by American music: the fact that so many reggae singers have falsettos is directly attributable to the popularity of Curtis Mayfield and the Impressions. Listening to Disc One you can hear the Jamaican record industry maturing: the recording quality gets better, the songwriting gets more complex, and the artists start to find their own distinct Jamaican sound. By the end of the album you are at Bob Marley’s classic “Trenchtown Rock,” and Jamaican music has truly come into its own.

Disc Two covers the 1970s. Like the first disc, it contains a mix of classics and deeper cuts. No compilation of 70s reggae would be complete without Culture’s “Two Sevens Clash,” Junior Murvin’s “Police and Thieves,” or Jimmy Cliff’s “Many Rivers To Cross,” and they are all present and accounted for. Bob Marley is also well-represented, as well as lesser-known artists like General Echo, Janet Kay, and Eric Donaldson.

Disc Three covers 1980s reggae, with an emphasis on dancehall. A feedback loop occurred in the 80s: kids in New York listened to 70s Jamaican dancehall, created hip-hop, which in turn influenced Jamaican dancehall artists, who influenced American rap artists. The emphasis was on digital beats and the sophisticated if slack chatting of artists like Yellowman. Sister Nancy’s “One Two” is a welcome injection of feminine talent in an industry almost solely dominated by men. Dennis Brown, Sugar Minott, and Garnett Silk are also on hand on Disc Three to prove that songwriting didn’t get totally destroyed by the proliferation of cheap Casio beats coming out of Jamaica in the 1980s in the wake of “Under Me Sleng Teng.”

Disc Four brings us to the present, highlighting some of the top reggae and dancehall artists of the past twenty years. Elephant Man, Sizzla, Buju Banton, Lady Saw, and Sean Paul are all represented here. The music pales somewhat in comparison to the songs on the other discs: there are fewer hidden gems than on the other discs, and many of the hits here are songs I didn’t feel the need to revisit. The fact that there is so much overlap between this and VP’s “Out of Many” compilation added to a feeling of deja vu. If you picked up that set, it’s tough to make the argument that you need to shell out the sixty bucks for this one as well.

If your reggae collection is limited to Bob Marley’s “Legend,” “Reggae Golden Jubilee” is a good entry point to dig deeper into Jamaica’s rich musical heritage. Even fairly serious reggae fans will find some unexpected treasures in this collection. Since it is an overview of an entire genre of music, it doesn’t dig too deep into any one era or style. There is also a lack of cohesion as it jumps from ska to dub to dancehall to lovers rock. Still, it’s a great overview of Jamaican music that highlights the many different sounds and eras reggae has gone through in the past fifty years.