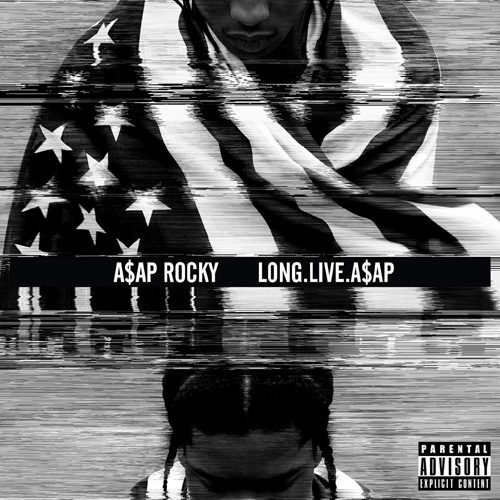 Major label debuts are a tricky thing to pull off, and there are many ways to approach such a daunting task. You could load it chock full of singles just to get a foot in the door; create a respected concept from start to finish; focus on getting the production right as a safety netâ€¦ And some prize versatility above all, viewing the album as a showcase for their talents, a curriculum vitae for their entire pre-label come up. That is certainly the case when it comes to A$AP Rocky’s major label debut “Long. Live. A$AP” – I knew it was going to be pretty big, but I had no idea that it would have its own commercials in the UK, not to mention top billing on iTunes. That’s a real signal of intent.

It’s been a while since Harlem was hot, but the man literally named Rakim after the ACTUAL RAKIM (good grief, dear Reader, hip hop is getting old) is determined to deliver a listening experience worthy of his neighborhoods illustrious history. To be honest, Rocky sounds little like a Harlemite, let alone a New Yorker – his sprawl is frequently heavy on the Southern angle, with or without plug-ins. Yet he manages to marry the two styles effectively enough – perhaps not directly through the sound, but certainly the ideology. Regardless of his own performance as an MC, Rocky has managed to oversee an impressive array of guest artists and producers, and the end result is relatively cohesive and dressed to impress.

It’s difficult to describe the subject matter of LLA, simply because it is all over the place. In this decade, it pays to give something of yourself to the fans, and Rocky certainly balances the traditionally macho topics with more emotional and self-examining content. There are a couple of missteps, but on this lean twelve track offering, almost everything works. The beats really do help, as there are some awesome instrumentals on display. Skrillex and Birdy Nam Nam – yes, like from “The Party,” Peter Sellers fans/Indians – deliver an absolute God-fucking-zilla of a jam on “Wild For The Night.” The self-titled opener has swiftly become one of my favourite instrumentals of the last few years, a masterfully subtle stomper from Jim Jonsin and co. Hit-Boy is simply on fire, and continues his NBA Jam streak with another couple of gems: the almost “Hell Hath No Fury” coldness of “Goldie” and the incredible posse cut “1 Train” which literally features six guest MC’s in a row, no chorus (Kendrick Lamar, Joey Bada$$, a stunner from YelaWolf, Danny Brown, Action Bronson and Big K.R.I.T). Clams Casino takes it to another “LVL” and even Danger Mouse turns up on the jaw-dropping “Phoenix.”

There are a couple of moments that probably looked better on paper. You may well recall my diatribe against the shockingly bad 2 Chainz album of last year (which somehow managed to get a joke of a Grammy nomination). Well, although “Fuckin’ Problems” has a decent beat and some goofy charm, it’s disappointing with A$AP being the only rapper to turn up. Drake’s verse is below average by his standards, and Kendrick Lamar’s is an appalling effort, sounding as if the aforementioned 2 Chainz had ghostwritten it. “Fashion Killa” just seems out of place, a blatantly fawning song for the ladies that doesn’t earn its place at the table. “Hell” is a bit more debatable – it is definitely a grower, but some may not take to it, with Santigold’s vocals not necessarily endearing themselves to everyone, even if the instrumental goes well.

Yet without a doubt, “Long. Live. A$AP” is a debut album to be proud of – it’s the kind of cut that most labels would lazily throw together, but the vast majority of it functions at full capacity, as it has clearly been handled with care. The intelligently sequenced long play zips by, drawing you into a late night/chilled mood before getting certain messages across. It’s one to vibe out to, one to drive to, one for the headphonesâ€¦ The versatility pays off, as A$AP himself delivers throughout, with crisp verses and a pleasing vocal tone dovetailing well with truly excellent production. He can spit multiple flows/styles, and is almost always on point – don’t underestimate how difficult that is to pull off. The final song shows how talented Rocky truly is – “Suddenly” is a masterclass in that “Suicidal Thoughts” vein. This is really how a major label debut should be, and even if there aren’t many monster single moments, LLA turns out to be – hands down – one of the most listenable albums you will hear this year, with a genuinely high repeat factor. Yes, in some ways it is a touch safe, but it picks a few choice moments to break out and take risks, and aside from a couple of songs, it never drops below a high level. There are also some genuine standout tracks, and all in all, A$AP Rocky and his team deserved the critical and commercial acclaim that will inevitably flood their way. Sometimes whilst the “saviour” gets all the attention, the dude out of focus is quietly crafting damn good music. You need to check this album out. As Soon As Possible.