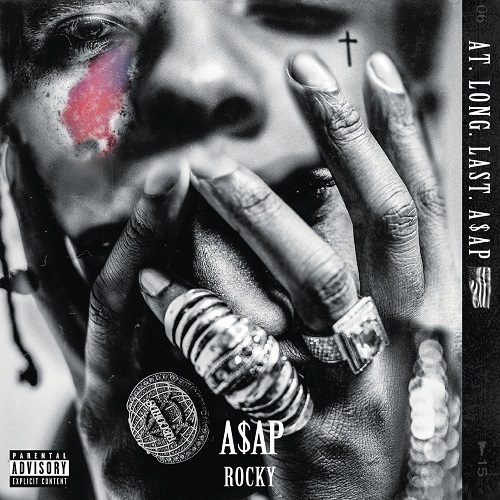 A$AP Rocky went from being homeless and dealing drugs to having a label, gold album, hit records, a clothing line, a series of famous girlfriends, and a career directing videos, all in the span of a few years. So how does he follow up his successful 2013 debut “Long. Live. A$AP?” By eating a bunch of acid and making a record about it.

Maybe that is a bit too reductive a way to describe “A.L.L.A.,” but the influence of mind-altering substances is all over the album, from the screwed and chop sounds of “Fine Whine” to the lyrics of “L$D.” Of course, A$AP has been rapping the praises of codeine since the beginning, to the extent that he sounds more like a Houston rapper than a Harlem one.

He also teams up with Danger Mouse. That is a little confusing in that A$AP Rocky isn’t a white middle-aged rocker, which is pretty much who Danger Mouse works with these days. Given that Danger Mouse’s last production credit was a U2 album, A$AP fans could be forgiven for being skeptical. The good news is that Danger Mouse’s involvement helps the album rather than hurt it. Having an executive producer on a rap album is a major plus, especially a major label rap album by a rapper known to dabble stylistically. Danger Mouse ensures that “A.L.L.A.” feels like an album rather than a collection of songs. It maintains a coherent voice, even with the usual rotating crew of producers. In fact, the only producers who radically stray from Danger Mouse’s spaghetti western on codeine and acid sonic template are Juicy J. and Mark Ronson, whose tracks sound like Juicy J. and Mark Ronson songs, respectively. Other than that, the album is largely a stoned, syrupy affair.

“A.L.L.A.” is all about A$AP Rocky owning his persona and his role in hip-hop. He makes less nods to rap trends than on his debut. Even the guest rappers fit in with A$AP Rocky’s vibe rather than the other way around. Kanye offers some stream of consciousness verses on “Jukebox Joints,” Lil Wayne’s Lil Waynisms fit in perfectly on “M’$,” even Juicy J and Bun B. seem to be coming down to A$APs level on “Wavybone.”

You might be wondering why this review is a month late. The reason is because, like “To Pimp A Butterfly,” “A.L.L.A.” is a dense album that takes repeated listens to absorb. I’ve had this thing on repeat for all of June and I’m still trying to wrap my head around it. To some extent it reminds me of another acid rap classic, Redman’s “Dare Iz A Darkside.” “A.L.L.A.” is often cavernous and woozy. Unlike Redman’s opus, however, “A.L.L.A.” is full of hooks and nods to the mainstream, or at least people who don’t get excited about rappity-rapping. A$AP is assisted by British singer Joe Fox, who lends his earnest and soulful voice to several songs. Fox helps give “A.L.L.A. a gravity and mournfulness, and is one of the keys to why the album works.

Lyrically, “A.L.L.A.” is bit of a disappointment. You’d think that someone who had been at the epicenter of the Eric Garner protests and whose friend and mentor passed away would have something to say. But most of the album is either A$AP propping himself up or calling out other rappers for biting his style. Even “Back Home,” the tribute to A$AP Yams, is more about how great A$AP is than about his dead friend:

“Trying to find home, next stop is the Waldorf
Past the racism and fake-ism
Type of hate that make you feel worse than a rape victim, raw dogs
You other n****s mad soft, mad I rap my ass off
They throwing mad salt, ’til I go bath salt
On wax, spitting heat to melt the wax off
I’m Mr. Miyagi in Issey Miyake
Asshole flow, fuck name brands, past logos
Now I’m onto grand raps, hands so low
It’s like my fashion style is the life saver
Guess she wasn’t satisfied with titties that Christ gave her
Bragging that her new ass shots is a life changer
Head so good on that girl that I might pay her, or nah
Super laid back cat, opposite of fat black, Al Capone
Tell them lil’ n***s Flacko home”

There’s a strain of sexism throughout the album that is grating and embarrassing. I realize calling out a rap album for being sexist is like calling out a jazz album for having too much saxophone, but A$AP’s whinging about women is egregious enough to warrant mention. Pretty much, if he’s had sex with a woman she gets a mention on “A.L.L.A.,” and usually in unflattering terms. Then there’s this gem from “Better Things”: “I take a dyke chick if she like dick/I kissed the dyke chick and I liked it/Fucking each other and Katy Perry for the night bitch.” Sounds like somebody needs to look up the definition of the term “lesbian.” Hint: they don’t like dick.

One thing that makes the shallowness of A$APs rhymes palatable is his sense of humor and his skills as a rapper. Even if he is just doing his gangster dandy thing, he does it will style, like on “Excuse Me”:

“Okay excuse me, Mr. Bill Collector, I got problems
My check arrive maâ€“ana, Ima pay my debt, I promise
I spent 20 thousand dollars with my partners in Bahamas
Another 20 thousand dollars on Rick Owens out in Barneys
I said excuse me, why the fuck you looking?
What’s your problem?
I swear we gonna have drama if you touch my tailored garments”

At the end of the day, A$APs charisma and finesse mostly compensate for his shortcomings as a lyricist. That, combined with the trippy heaviness of Danger Mouse’s production, make “A.L.L.A.” an album worth spending time with, even dead sober.