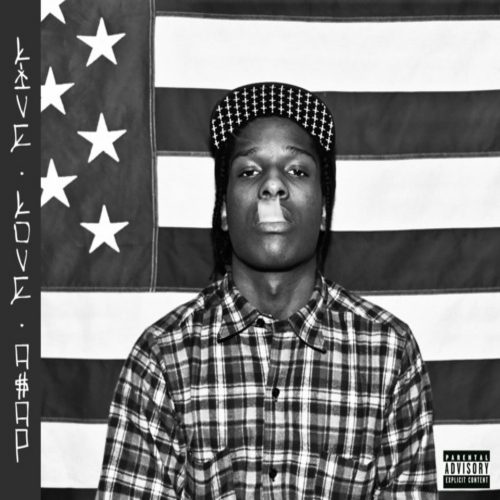 2011 was the year the young Rakim Mayers b/k/a A$AP Rocky exploded onto the rap scene. It’s not hard to imagine anyone named after one of hip-hop’s most important and influential lyricists wanting to pursue a music career himself, but fame and fortune was just a dream back in the 1990’s when his older brother was killed and his pops got locked up for selling drugs in the span of a year. By his account, it was this turn of fortune that made him decide to take rapping seriously, but that wasn’t what made his now famous “Purple Swag” music video go viral.

Within seconds of the clip rolling, a young caucasian lass smiles happily into the camera, then proudly proclaims “This is fo’ my niggaz gettin’ high on the reg-u-lar” – showing off gold fronts on the lower half of her jaw in the process. Given the controversy about white female rappers like V-Nasty and Kreayshawn using the word “nigga” in songs and interviews in 2011, Rocky’s video came along at exactly the right time to be noticed by pen wielding writers looking to excoriate yet another girl perceived to be perpetrating a cultural fraud. A$AP swears that “Anna” is just a crazy girl from Harlem he happens to be friends with, and we’re to infer that any girl from around his way he drinks and smokes with is just cool like that.

You could literally picture the heads of pundits exploding in frustration at the apparent double standard of V-Nasty being called on the carpet while Anna got a free pass. The more they fumed and steamed, the more the video got played, and the more exposure A$AP Rocky got. If the whole thing was a coincidence, it was an incredibly fortuitous one, as it led to the unsigned rapper landing a multi-million dollar recording contract with RCA Records. I’m cynical enough to think it was NOT a coincidence, but no one can prove it either way. If she’s a real Harlemite and real friend of Rocky’s then she needs to launch her own website ASAP (no pun) and cash in on the millions of websurfers who only know her as “the Purple Swag girl.” In the meantime the rapper who regularly refers to himself as “that pretty motherfucker” is releasing videos for songs like “Peso”:

“I be that pretty motherfucker, Harlem’s what I’m reppin
Tell my niggaz quit the bitchin, we gon’ make it in a second
Never disrespected, plus I’m well connected
With this coke that I imported, just important as yo’ President
Swagger so impressive, and I don’t need a necklace
But these bitches get impressed when, you pull up in that 7
Them 6’s, them Benzes, I gets gets the freshest
Raf Simons, Rick Owens usually what I’m dressed in
Rollin blunts, rollin doobies up, smokin section
Groupies rush, hold they boobies up in my direction
Quit with all the frontin, you ain’t ’round my clique for nuttin
Cause our presence is a present, just to kick it is a blessin”

“Peso” has one important thing in common with “Purple Swag” besides a music video – production from Rocky’s friend Ty Beats. “Purple Swag” was a New Yorker’s version of DJ Screw music, complete with big bass beats and slowed down vocals, riding over an undeniably catchy loop for a limited amount of time. “Peso” is almost nothing like it in any way except for also being under three minutes long. It drifts along like a lone cloud in a bright blue sky, tinkling and vibrating as a ultra mellow ode to stacking money. It momentarily gets angry during the chorus with a promise to “gun cock, gun shot” but otherwise only gets as hard as the drum beat. In either case Ty shows himself to be a more than competent producer, which makes it disappointing he only contributed two songs to this entire mixtape.

“That pretty motherfucker” is working with some other good producers though. Clams Casino also seems to have figured out the right relaxed and breezy vibe for the Harlemite on “Wassup,” another of Rocky’s singles to get wider distribution. For my money though it’s the slow stoned vibe of “Palace” that’s a true indication of what Clams can do, as his protege attempts to explain his fascination with all things Third Coast:

“Don’t remember me, as a wannabe, New Orleans nigga
slash lean sippin, Tennessee nigga, nawww
Influenced by Houston, hear it in my music
A trill nigga to the truest, show you how to do dis!!
My all gold grills give her cold chills
Said she got a coke feel cause I’m so trill
Two dope boy scale but I sold pills
No bill, put her on her feet, toe nails
Them vampires, them blood suckers, them thirsty killers
We ’bout it ’bout it, we rowdy rowdy, that Percy Miller”

Much like Scott Mescudi, young Rakim Mayer seems to be trapped in his mind, haunted by “Demons” of his own design. Clams Casino provides a fittingly eerie beat for Rocky to follow down the road to madness. One can only hope he was exaggerating for cinematic effect when he talks about some of the controlled substances in this song:

“I smoked away my brain, I think I’m goin dumb
Cocaine up on my gums, I think they’re goin numb
I’m having stomach pains, man I’m throwin up
Cause I’m a microphone fiend, give me the bass
Give me the beat, and let me lean, tap the vein, let it stream
Feel the pain, young Martin Luther King, with a dream
That one day, that my team, we can make it with this rappin
Now we swaggin, makin money in Manhattan, trick what’s happenin?!
They try to intellect with indirections just to test you
A rebel ’til my death it’s in my flesh it’s in my vessels
Fuck the clique you with I’m fin’ to fuck the bitch you next to”

Nothing is simple or clear cut about A$AP, which is what makes him both interesting and vexing as a young artist. Much like Tyler, the Creator he almost seems to be a victim of his success at times – rising in fame and wealth overnight before having fully developed and matured as an artist. Tracks like “Get Lit” and “Acid Drip” show his obsession with chemical mental stimulation of all kinds, but show no ability to translate altered mindstates into a worthwhile narrative. Some songs can hold onto an idea for one verse and lose the plot in the second, such as “Houston Old Head,” which for a time is a fine DJ Burn One tale of Rocky’s trip down South. Unexpectedly good songs come along at random, with A$AP showing an ability to flip vocals quick on “Trilla,” and his friends Nast and Twelvy provide good accompaniment. On others like “Kissin Pink,” the beat holds more interest than the rhymes.

“LiveLoveA$AP” is compelling but wildly uneven in execution, which perhaps makes it for the best this one is just a free download that’s a prelude to his major label debut. It’s somewhat disappointing that the original version of “Purple Swag” was left out in favor of a “Chapter 2” with his friends, but that can ultimately be forgiven. What won’t be forgiven is if A$AP Rocky doesn’t take full advantage of that fortuitous or well planned publicity buzz he earned in 2011 to be more than just “that pretty motherfucker” from Harlem. He could do big things in 2012, or he could wind up being a one hit wonder best remembered for a mystery white girl in his music video who said the word nigga. Only time will tell which he turns out to be.